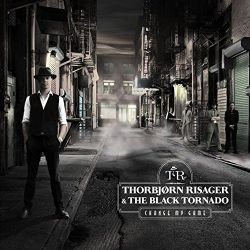 When the 2014 Too Many Roads album came out, half of the music press worldwide finally tributed Thorbjorn Risager & The Black Tornado, desevedly so, as one of the hottest blues/rock bands around. It was a breakthrough record that brought Risager and the band to the attention of a more international audience, thanks to an irresistible combination of great songs, Risager's formidable talent as a singer-songwriter and performer and The Black Tornado's huge musical craftmanship.

For those who followed the Danish artist's career since the beginning, they know very well that there are a lot more layers of sounds and musical influences in Risager's background, beside the blues and rock genres that brought him and The Black Tornado to global popularity.

Their brand new album, Change My Game, would lead, through its title, to believe to a new change of artistic direction for Risager & Co. Instead, the Danish singer/songwriter & The Black Tornado deliver a record that incorporates the collective's love and devotion for music in its globality, through eleven of the best songs that Thorbjorn Risager has ever written in his glorious career.

Change My Game is a fascinating, sophisticated and compelling record that carries many strengths within, like strong melodies, energy and, occasionally, a little darkness too.

The opening track, I Used To Love You, has got that very same "noir" feeling that the album cover has. Risager's fabulous vocals and The Black Tornado's soul-tinged performance on this track match each other in perfect harmony and simmetry.

When the music tempo starts to rise, the listeners are taken into an eclectic and highly entertaining joyride of funk (Dreamland, Change My Game), southern-rock (Hard Time, Maybe It's Alright), blues (Holler 'N' Moan, Train) and rock (Hold My Lover Tight and the closing City Of Love), the whole played, sang and executed by Risager and The Black Tornado at the highest standard imaginable.

The song Lay My Burden Down, among an already impressive album setlist, deserves a separate mention. Risager sings with the class, pathos and finesse of a true Chansonnier on this very evocative tune, with The Black Tornado providing the most perfect soundtrack to, perhaps, some of the darkest and, at the same time, most intense lyrics of the album.

Change My Game is a superbly written, played and produced record. There is not a single note misplaced throughout the whole album. Risager's songwriting is impeccable and his voice has never sounded better than this. The Black Tornado too proved, once again, why they are one of the top five best studio and live bands in the music business.

The year 2017 marks through the release of Change My Game, another defining moment in the career of the Danish artist and his collective in what it is, undoubtedly, their best ever album to date.