Schenker has heavily contributed, through the years, to keep the hard-rock genre alive and kicking through a series of inspired musical projects like Scorpions, UFO, Michael Schenker Group and McAuley Schenker Group, amongst others. 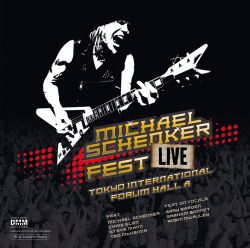 When, last year, the opportunity arose about doing a special concert and re-uniting members of UFO and the MSG all together for the event, the German guitarist didn’t waste a minute on making few calls, asking his fellow band-mates to join him. The matter of choosing the perfect location for this special concert was a no-brainer as well for Schenker. When Tokyo International Forum Hall gave their availability, the German Guitar Maestro couldn’t believe his luck. The musical love affair and the special bond between Japan and Michael Schenker is something that has been ongoing for almost 40 years and still going very strong.

Schenker builds the set-list of the show very cleverly, with each vocalists doing their own sets separately. In-between sets, The Mad Axe-Man from Germany uses some of his most famous instrumentals like Into The Arena, Coast To Coast and Captain Nemo as the perfect intermezzos, allowing his guitar to run even more wild and free, in typical Schenker's style.

Perhaps Gary Barden is the only singer that shows signs of the times out of the three sets. Schenker's long time fellow friend and musician does not manage to reach quite as much as Bonnet and McAuley the vocal standards to which we were familiar, back in the 80’s, perhaps the only little down side of the album.

As one would expect in those special occasions, Schenker and Co.'s setlist is heavily paying tribute to UFO and Michael Schenker' Group's songbook. Some of the performances on the night still show that perfect interplay between musicians that made, especially in the 80's, the Michael Schenker Group as one of the most perfect rock machines of that era. Attack Of The Mad Axeman, Cry For The Nations and Desert Song are executed with great precision, McKenna and Glen still providing the best Rhythm Section Schenker ever had in his career.

Another memorable moment of the live album is Save Yourself, where the Irish singer Robin McAuley showcases in full the power and the quality of his incredible voice.

Between all this happening on stage, there is always Michael Schenker's guitar dictating the tempo of the show. His guitar style is still as strong, fast and furious as it used to be at the beginning of his career and his presence on stage is extraordinarily contagious for whoever watches him playing.

There are not many musicians able, like Schenker, to carry the hard-rock's flag as well as he does and his story as an artist is certainly one of the most interesting and inspiring all-time rock'n'roll stories. This live album at the Tokyo International Forum Hall sees an artist in great form, relaxed and, most of all, committed to his music now more than ever. Long live The Mad Axeman.