Charles Parker: Bring Back The Sun 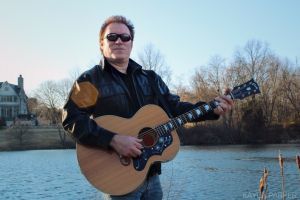 Bring Back the Sun is a great surprise to listeners who enjoy music from the singer songwriters of the 1970's plus a little classic rock. The guitars lead strong and provide a full rock experience, tasty guitar solos and upbeat percussion. This refreshing treat brings on harmony vocals and a sunny 70's sound. In "Social Director" and "A Place That We Call Yesterday," Charles applies his experience in playing 60-70s rock and folk to create a contemporary record that pushes the boundaries of the singer-songwriter genre. "Yasmine" hits you with a Joe Jackson feel, and the catchy vibes reverb throughout the collection. "Strollin" has serious lyrics with mirror rhymes, that bring forth many of the great qualities we love from the bands that influence Parker. The "Calypso Song" is a break from the harmony line to a free steel drum sound still keeping in with Parker's style. Ballads like "I Love To Feel The Rain" "Stop" and the title track, "Bring Back The Sun" are reminiscent of the days of "Baker Street" with Gerry Rafferty and just an enjoyable time. "One Way To Go" shows off Parker's rocker breed and it stretches across all decades and even genres, including rock, folk, funk and a little punk too. "Say Good Bye" may be a favorite of this 15 song record as it brings all of Parker's talents together in one harmonious song.

PRESS RELEASE: Charles Parker is a triple threat, who not only can sing and play guitar but also writes on a level far above most of his peers.  His unique music is a place where rock, folk and pop cross paths on the way to a remarkably contemporary sound.  Through his work being a professional musician in cover bands and tribute bands, Parker is a seasoned performer who is known for his strong work ethic, passion for music and determination to persevere.  With his over 20 years of experience, the journey continues through the release of his debut album Bring Back The Sun.

Born and raised in Baltimore Maryland, Parker started life as a very shy kid.  “My Mom bought me my ﬁrst guitar when I was about 10 yrs old.  She said she wanted me to be like Elvis.  It took several years to actually learn how to play it. I spent my early years listening to 70's pop stars such as The Bay City Rollers, Patridge Family etc.  Then I saw Kiss Alive 2 in the department store and that changed it all.  No more Teen idol pop.  My inﬂuences went from BCR to Kiss then the Metal years came in. Iron maiden, Judas Priest and all the Hair Bands.  I learned to play everything I could. Thats why in my cover bands, we can pretty much play anything the audience asks for.  I’ve been able to make a living as a full time musicians for quite a long time which is unheard of around here.”

Parker’s debut album as a solo artist, Bring Back The Sun, features a sound that is big yet stripped down with infectious melodies and catchy hooks.  “When I sat down to write the album Bring Back the Sun, I don’t remember really trying to do it, it sort of just came out. I just remember sitting down with an acoustic and strumming some chords and humming a melody. I think the ﬁrst 2 songs were "Love to Feel The Rain” & “Stop”.   After that, the songs just kept coming.  I woke up in the middle of the night with the Chorus of “Bring Back The Sun”.  I got up ,wrote it down and grabbed a guitar and ﬁnished the rest.  Good thing I didn't go back to sleep that night.

Bring Back The Sun was released on January 27th.