Zoe Schwarz Blue Commotion - This Is The Life I Choose 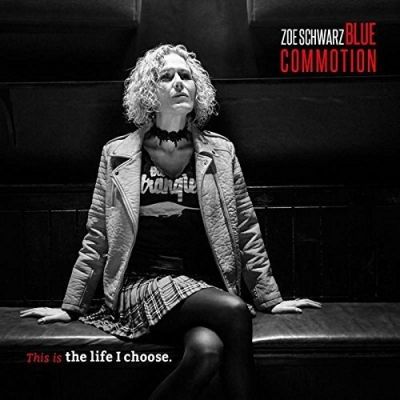 Too often, in nowadays music world, artists feel like they have to adhere to certain standards, because they know or they think to know what fans are expecting from them, musically speaking. That philosophy generates frequently very monotone albums, with the same musical structure running through the whole album over and over again, just lightly reshuffled to give the fans the impression (or maybe the illusion) they are listening to new and vibrant songs.

Luckily for us, there are still music artists out there that decide instead to follow solely their instinct, no matter where the direction of their music take them to. On this matter, the new album from the English collective Zoe Schwarz Blue Commotion called This Is The Life I Choose is the ideal representation of what the music and the concept of making music should be all about and stand for.

Originally formed in 2012, the English band assembles musicians of great skills and artistic finesse, starting from the lead singer Zoe Schwarz, going to the guitarist and one of the chief songwriters of the band Rob Koral, then to Pete Whittaker on Hammond organ and Paul Robinson on drums and percussion.

This Is The Life I Choose is a true musical matrioska, able to surprise the listeners every time that a new song starts, unfolding different genres like blues, jazz, pop/rock and swing. Most certainly, by having a singer of the calibre of Zoe Schwarz, that makes life enormously easier for any band to tune in and out of different tempos on a record, something that Zoe Schwarz Blue Commotion succeed to do in full on their brand new album.

One part Billie Holiday, one Janis Joplin, one Emiliana Torrini and one Nina Simone, Zoe Schwarz's vocal lexicon is eclectic and suave at the same time, with the singer able to modulate her extensive vocal ranges with such grace every time that a song assumes different musical colors. Just like a chameleon, Schwarz brilliantly transforms herself on this record either in a cheeky raconteur, like in the song My Baby Told Me So or in an authentic powerhouse, like in the opener high-tempo Hold On and the slow, bluesy Broken.

The whole band though, in its entirety, does an excellent job throughout the whole record. Koral, Whittaker and Robinson are irresistible in the dynamic, foot-stomping beat provided in the song People or through the richness of sound they so well apply in the pop/rock tinged song called Exit.

There are a couple of songs though that stand out above the already luxurious musical offer coming from this record. This Is The Life I Choose, the tune that inspired also the album title, has got all the elements of a perfect song; from the inspired songwriting coming from Rob Koral about the tower of strength needed by musicians worldwide to be able to survive in the present music business to the mesmerizing arrangement of the tune itself, where Koral pens the best guitar riff of the whole album and Schwarz delivers, once again, a great vocal performance.

The other true gem of this remarkable album is, in our view, Call Of The Night. Based on a poem written by DJ and Music Promoter Pete Feenstra, Schwarz gifts the listeners with a spine shivering vocal delivery cleverly constructed on a slow, ethereal and almost hypnotic music carpet provided once more by this superb English collective.

This Is The Life I Choose is a breath of fresh air in an often suffocating and repetitive music business and it is, once again, an artistic statement on the high level of quality and originality that the British music is living right now.