Jim Roberts And The Resonants - Beneath The Blood Moon 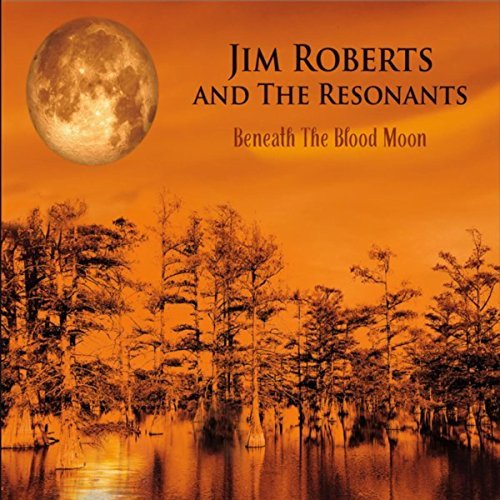 You can walk through different paths in your life but, in the end, if music it's your first love, you will always get back to it, sooner or later. This is exactly what happened to guitarist and singer/songwriter James R. Poggensee, aka Jim Roberts, which in the 90's, after 20-odd years of music activity, to absolve family duties decided to let aside the music and start working as a police officer. But, with time, with the same effect that the irresistible chant of a mermaid would do to humans, back in 2012 Roberts decided to go back to what he really loved doing, a love affair with music lasting for more than four decades and still running. The 2014's album Devil On A Dirt Road, released when the band was still called The Jack Roberts Harvey Band, showed clear signs that the magic in Robert's music was still there, despite the 15-years hiatus from the music business.

Robert's brand new album, called Beneath The Blood Moon and released under a new band name, Jim Roberts And The Resonants, is a definite game changer in Robert's career as a musician. His slide guitar sound is sharper and stronger than ever, his lyrics more personal and inspired, his vocals displaying a growing solidity and maturity in comparison to Robert's last album.

One of the many qualities of Beneath The Blood Moon is the raw and instinctive approach that Roberts and The Resonants have, on this record. Whilst the Southern Rock's sonic matrix is always there and runs solid throughout the album, it's refreshing to notice though the open attitude of Roberts and his band have, to adapt elements of funk, roots, americana and even progressive rock to the collective's musical offer, on this highly entertaining record.

The album title-track, which opens the record too, is pure Jim Roberts through and through. A robust display of foot-stomping rock and rootsy atmospheres is superbly led by Robert's guitar riff, that cuts like a knife into one of the several highlights of the album. Tupelo Fool is an impressive musical immersion into funk territories, with Roberts and The Resonants showing great elegance and class in the delivery of this song. The Resonant's bass player Rick Hollander, in particular, helps to carry the beat with such military precision throughout the song, lifting, through his performance, this tune even further.

Beneath The Blood Moon keeps rising songs after songs, both in terms of quality of the tunes and musical ability as un unstoppable, emotional rollercoaster. May All Your Regrets Be Small is a touching letter in music from father to son, with the use of accordion providing an ulterior lift to an already splendid ballad. Gold Train Fever has got that distinctive ZZ Top flavour, in a tune where blues, roots and rock amalgamate perfectly, thanks also to an extraordinary performance of The Resonant's Mike Finnigan on Hammond

Red Lips And High Heels is, once again, the demonstration of a collective playing with great harmony and synchronicity, with Robert's astonishing ability on guitar once again on full display and Finnigan again, this time both on piano and Hammond, raising the musical temperature higher and higher.

There is still time, on the record, to admire the way that Robert's voice is able to adapt to different music styles with equally brilliant results, from the Southern Rock infused Southern Hospitality to the intriguing, ghostly atmospheres coming from Dark Down In The Delta.

The closing tune of the record, The Hell Hound's Due, is Robert's ultimate signature piece. A truly intense semi-acoustic song, where Robert's vocal skills reach the absolute peak of perfection on the record.

Beneath The Blood Moon is certainly a record to love and cherish, because it is indeed a work of love of a sincere artist and his band of brothers. It's an album that embraces the roots of American music on many levels with great finesse and immediacy at the same time. Most of all, it's a record that reminds us once again how many incredibly talented artists the United States have got, just like Jim Roberts And The Resonants.