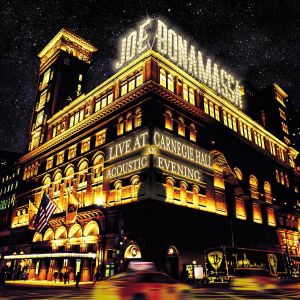 There's more to Grammy nominated, Blues-rock guitarist Joe Bonamassa than a plethora of shiny Gibson Les Pauls and Marshall amps.  Bonamassa's an artist.  Driven by an insatiable appetite for the blues, he has put-to-the-test every six-string within grasp, in search of the holy grail in tone-- the one to match what can only be heard inside his head.  As for the music?  It's a personal journey that speaks for itself, as evidenced in a rapidly expanding solo catalog, of where instrumental and acoustic-infused songs are neatly sandwiched between progressive, guitar-driven melodies.  Joe Bonamassa: Live at Carnegie Hall, An Acoustic Evening is a career defining moment in the bluesman's professional life: it's another opportunity to keeping the blues alive for the next generation.

"This has not been the easiest specialty project," Bonamassa reveals in the behind the scenes clip, Journey to Carnegie Hall. "It fought us a little bit."

The two night concert held on January 21 and 22, 2016 at Stern Auditorium's Perelman Stage was part of an all-acoustic (limited) tour that featured an all-star ensemble of world-class musicians including acclaimed Chinese cellist and erhuist Tina Guo, whose repertoire stretches from classical to heavy metal; and Hossam Ramzy, the Egyptian percussionist and composer, who has performed on dozens of film sound tracks and records, including Jimmy Page and Robert Plant's No Quarter: Unledded tour.  The band line-up also includes Reese Wynans (piano), Anton Fig (drums), Eric Bazilian (mandolin, hurdy-gurdy, saxophone, acoustic guitar, vocals), and three Australian vocalists, Mahalia Barnes, Juanita Tippins, and Gary Pinto.  Both performances were filmed and will be released as Double CD, Double DVD, Blu-ray and 3 LP Vinyl on June 23rd.  Fans will appreciate newly arranged renditions of timeless classics and never-before-heard new tracks.  Below, the official video trailer highlights a few of 15 songs offered in this recording.

A sampling of bluesy piano and guitar riff taken from "Locomotive Breath" signal it's full steam ahead to track 1.  Bonamassa and company waste little time setting the pace for the next 93 minutes with "This Train" (Blues of Desperation; 2016) , a hard-driving, rusty-rail groove of rhythm, strings, and percussion.  The background harmonies toot, "Woo Hoo" and hook-up down the line for a rousing orchestral jam.  Next, the free-flowing tempo of "Drive" (Blues of Desperation; 2016) and gentle notes emanating from Tina Guo's erhu, lighten the mood.  The erhu is a two-string bowed instrument, also called a Southern fiddle, and most complimentary to Bonamassa's soulful articulation.  Guitar soloing is sultry and calming, while subtle glints of mandolin melt away any remaining stress.

"Put on an old blues song.  Let all our troubles be gone.  And drive."

Melancholy drifts all through the ballad, "The Valley Runs Low" (Blues of Desperation; 2016), a style well-suited to the singer's voice.  There's no straining to rise above electric shrills, only fluid verse.  The fusion of instrumentation and harmonies on "Dust Bowl" (Dustbowl; 2011) generate an air of nostalgia and worldliness, the illusion of one big traveling caravan of free-spirited musicians.  On "Driving Towards the Daylight" (Driving Towards the Daylight; 2012), the addition of cello to the arrangement heightens the sentimental connection in this tale of longing for love and home.  These updated versions are sure to please Bonamassa's fans.

A brief slide/front-porch picking instrumental transitions to a traveling tempo on, "Black Lung Heartache" (Dustbowl; 2011).  The spirited lament quickly became an even bigger fan favorite after a blistering performance from An Acoustic Evening at the Vienna Opera House (2013) surfaced on the web, and later on CD/DVD.  Here, gospel-infused harmonies and a spine-tingling cello solo magnify the mourning.  The same level of intensity is carried over to "Blue and Evil" (Black Rock; 2010), where Guo delivers another stellar cello solo.

On "Livin' Easy" (Blues of Desperation; 2016), Bazilian's smokey saxophone and Wynan's ragtime piano tuning depict an era when Dixieland jazz was the standard.  And closing out CD 1 is a foot-stomping, "Get Back My Tomorrow" (Different Shades of Blue, 2014).

With its triumphant, extended solo, Mountain Time" (So It's Like That; 2002) often was heard as an encore on Bonamassa's solo tours.  It was meant to leave the fans with a good-time feeling.  Here, Wynan's piano play makes the statement, gently guiding the mandolin, cello and harmonies to climb higher to meet Bonamassa's heartfelt phrasing.  The arrangement plays like a love song, and is equally memorable.

"How Can a Poor Man Stand Such Times and Live" (Blind Alfred Reed; 1929), a protest song covered by Ry Cooder and Bruce Springsteen, mirrors the same economic state of affairs in 2017, albeit a bit of inflation on a few dry goods.  And when Mahalia Barnes and Juanita Tippins have their turn at belting out a verse, there's no mistaking these ladies were born to sing the blues!

Bonamassa raises the stakes and goes all in on the next two tracks, "Song of Yesterday" (Black Country Communion 2; 2011) and "Woke Up Dreaming" (So It's Like That; 2002).  Similarly to "The Battle for Hadrian's Wall," also from the album BCC 2, "Song of Yesterday" has a haunting, ghostly presence that adds distinct drama to the storyline.  Watch the video below.

As an iconic staple for many years, "Woke of Dreaming"  is the 'flagship' acoustic song and reason for Bonamassa's (occasional) departure from ususal projects, according to J & R Adventure.  In Guo, Bonamassa has found a sparring partner, someone who can match him stroke for stroke.  When pairing two master musicians one would expect an excellent performance.  The synergy and improvising is best described as "surreal", "phenomenal", and "the greatest string-dual in history!"  Watch the video below.

A debt of gratitude is owed producer, Kevin Shirley, for without his foresight to blend cello, mandolin, erhu, bongo, drums, and various percussion with harmonies and Bonamassa's strong vocal prowess and guitar wizardry, Joe Bonamassa: Live at Carnegie Hall, An Acoustic Evening would not exist.  Creating this exquisite music took planning, a good ear and the collective effort of all nine musicians.  This performance is the perfect beginning for new Joe fans and but another musical adventure for seasoned ones.  As Bonamassa reminds us, "This is not my normal day job...these tours are comets that burn bright and then we're onto something else."

For more on Joe Bonamassa visit his social media at Facebook, Youtube and Twitter.  For other articles by Bluebird Reviews writers, check out Joe Bonamassa, Live at the Greek, Blues of Desperation: A New Book for Blues Guitarist, Joe Bonamassa, and Different Shades of Blue.