Stanton Moore - With You In Mind: The Songs Of Allen Toussaint 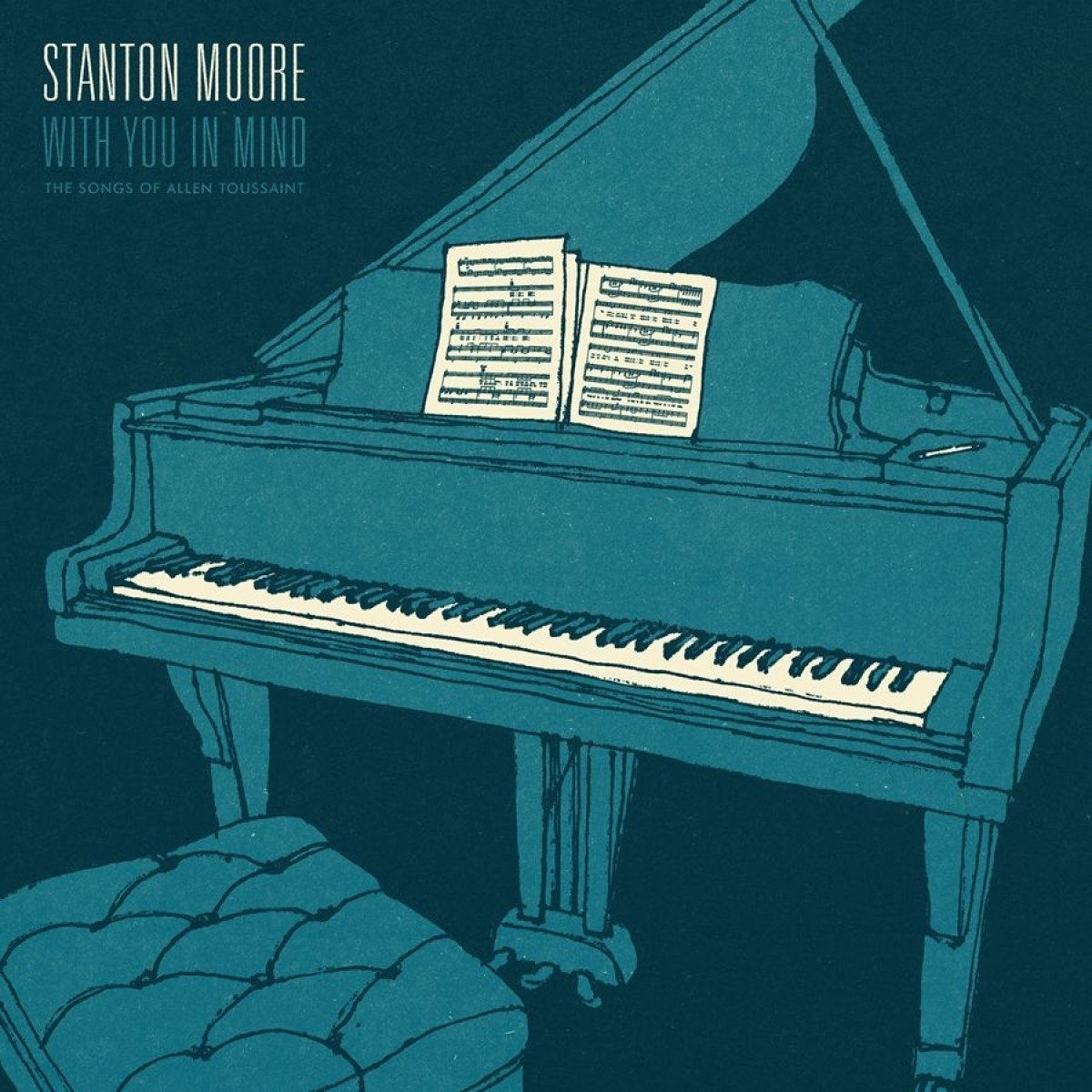 It's somehow still extraordinary that in a world that moves at the speed of light, where people or facts get easily forgotten in less than 48 hours, despite their importance or impact of any kind on the history of the world, someone of the caliber and talent like the Louisiana-born and drummer extraordinaire Stanton Moore still finds the time to pay respect, through the art form that defines him best, to a giant of world music and a personal friend.

With a new album ready to be recorded, back in 2015 and with his fellow friends musician David Torkanowsky on keys and James Singleton on bass ready to enter the studio to start the recording sessions, the news that one of Moore's long time friends and worldwide music icon, the late great Allen Toussaint, had passed unexpectedly away it really hit deeply the drummer, who had known and worked with Toussaint for quite some time.

Moore's decision to shelve the album he intended to record at that moment in time, prior to acknowledge of Toussaint's passing and to create, instead, a tribute record to celebrate the career of an extraordinary artist like Toussaint took no time at all.

With nothing pre-planned in the slightest for this new and unexpected scenario and with a recording studio already booked, Moore, Torkanowsky and Singleton started working intensely on trying to capture the spirit of Toussaint's talent in the most imaginative and creative way, simply by applying their personal vision and artistry on the vast musical legacy that Toussaint had left to posterity, through a career span of almost 6 decades.

The army of musicians that Stanton Moore called to help him on this project was vast and included some of the most gifted talents of the Jazz, Funk, R&B and Soul scene. From the legendary saxophonist Maceo Parker, just to give an example, to Blues/Funk vocalist and percussionist extraordinaire Cyril Neville, the cream of classic and contemporary artists were all keen to be involved in this artistic labour of love strongly wanted by Moore.

With You In Mind is a fascinating ride not just among Toussaint's own songbook but it's a also a record that takes the listener to a wider journey into the musical heart of a vibrant city like New Orleans, through songs of fellow compatriots and artists that Toussaint's often used to play, during his live shows.

The album opener, one of the greatest hits written by Toussaint and originally recorded by Ernie K-Doe in 1970, Here Come The Girls, is simply magnificent. Moore, Singleton and Torkanowsky recreate perfectly the sound intended by Toussaint when the song was written at the time and, to add even more spice to such a splendid rendition to one of Toussaint's all-time classic, Cyril Neville delivers a very strong vocal performance, while Trombone Shorty brings his magnetism and charisma through a phenomenalmid-song solo of sheer perfection.

There are countless moments of pure magic inside With You In Mind. The three instrumentals included in the album, they all travel to different musical territories but with one destination only, New Orleans. The version of Al Hirt 1963's Java, re-created by Moore and Co. and featuring Shorty once again plus two jazz gurus like Nicholas Payton and Donald Harrison is executed with remarkable precision and sophistication. Toussaint own's Riverboat carries the sounds and the moods of a night stroll in the heart of New Orleans and displays in full the talent of Moore's trio, with the added bonus of having Payton and Harrison as Special Guests to bring this version of Toussaint's classic in a new found splendor.

The third instrumental, With You In My Mind, deserves a special mention. Moore and the trio certainly raise the bar of the record, by putting together a superb, elegant version of Toussaint's classic. Torkanowsky's work on keys is utterly sublime.

Stanton Moore and his compadres in music do certainly know how to lift a tune, any tune, thanks to their craftmanship. And even when they need a vocalist to complete the structure of a song, they know very well who to choose for what they want to achieve. Jolynda Kiki Chapman, daughter of one of New Orleans most loved singers, Topsy Chapman, is absolutely breathtaking in her vocal delivery of 1976 Toussaint's original All These Things, one of the most intense moments of the whole record.

There is also a different, unknown side of Toussaint's artistry emerging in With You In Mind. Reggie Toussaint, Allen's son, kindly provided to Moore and his trio a thin book of poetry that his father wrote, which was fundamentally a re-working of some of Toussaint's lyrics of the many songs he had written in his career. Among all those sheets of lyrics/poems, Moore found one that was never before recorded, called The Beat and the drummer had the vision of creating a tune with Cyril Neville reciting the lyrics in a sort of Parlato form, with a great percussive sound carpet running in the background. A very inventive and original way to translate a poem. Something that Toussaint would have certainly loved.

The Spoken-Word theme is something that Moore decides to apply also to the closing song of the album, Southern Nights, a song that Toussaint wrote in the mid-70s and that the late great Glen Campbell recorded in 1977. Moore and his trio's version of this tune is certainly one of the most ambitious versions ever recorded. The song has many changes of tempo within the tune itself that never collide between one another but creating, instead, a total and certainly harmonic sense of musical escapism to the whole album. A clear sign of artistry and geniality at the same time. Moreover, the concepts of innovation and experimentality have always been part of Toussaint's approach to music, therefore the closing track certainly fits exquisitely the concept behind With You In Mind.

Stanton Moore has, through this record, not just paid the best possible artistic tribute that any musician can ever dream of but he also managed in full to translate splendidly the sounds, the history, the traditions and the beating heart of a vibrant city like New Orleans and of one of his most loved musical sons. A record of breathtaking beauty.

With You In Mind: The Songs Of Allen Toussaint is out now and it is available via Mascot Label Group - Cool Green Recordings