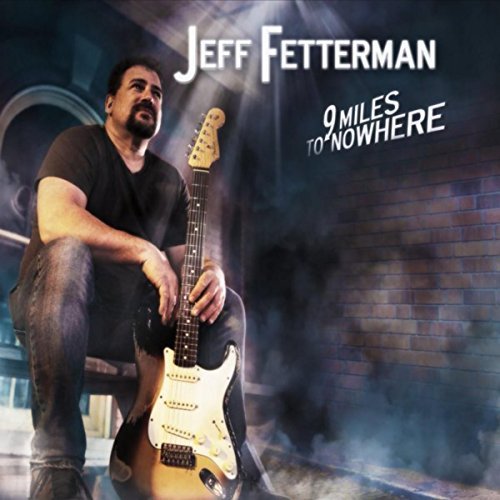 To follow up a solid, powerful and eclectic record like Bottle Full Of Blues was never an easy task to fulfill for Pennsylvania's guitarist, singer and songwriter Jeff Fetterman. Where a musician would normally stick on a tried and true formula, in order not to upset his fans, Fetterman goes instead, on his brand new album called 9 Miles To Nowhere, on a music path where his instinct and his eternal love for blues naturally lead him to.

The blues is and has always been part of Fetterman's DNA, something that emerged also clearly on his previous studio record, although armoniously shuffled with other genres also close to the artist's heart, like funk and rock.

9 Miles To Nowhere explores instead in deeper details the Pennsylvania's artist love for the blues and the way that Fetterman translates his passion and reverence for this genre is absolutely and genuinely soulful.

What transpires immediately, since the first notes of the record, is the way that Fetterman has grown stylistically in many ways, both as a singer and as a guitarist. From songs like Devil Knockin' At My Door or Early Grave, just to mention a few, one can admire not just the strength and the power of Fetterman's vocal deliveries but also the way that the artist has mastered to measure the intensity of his singing style according to the tempo of the songs, with outstanding results.

As a guitarist, Fetterman has always been a highly talented musician and it is a blessing for any music fan to hear that, on 9 Miles To Nowhere, Fetterman unleashes his guitar solos a couple of notches more than in his previous record. Something Just Ain't Right and Bad Feeling are the perfect examples of songs that reflect in full the stature and the versatility of Fetterman as a guitarist.

Something Just Ain't Right carries layers of 70's blues and funk psychedelia, with a mid-section part of the song that sees the artist from Pennsylvania and his Rhythm Section exploding in a small instrumental session, displaying phenomenal music ability from Fetterman and his musicians. Bad Feeling is instead a highly energetic foot-stomping boogie, where Fetterman's skills on guitar and his powerful vocal delivery go hand in hand, in one of the true highlights of the album.

The guitarist and singer/songwriter shows signs of great artistic depth on 9 Miles To Nowhere. Goodbye John Brown is a tune that shows a highly interesting approach to Delta Blues in a 5/4 tempo, with drummer John McGuire maintaining an almost military, precise cadence in this very inspired track. Early Grave displays sparkles of North Mississippi Hill Country Blues style, on which Fetterman's vocal delivery is a truly thing of beauty, a match made in heaven.

The closing These Arms Of Mine is a ballad of great intensity and class, featuring echoes of that old Louisiana style so much loved by giants of the genre like Fats Domino. A further expression of Fetterman's multifaceted vision and appreciation of blues at 360 degrees.

9 Miles To Nowhere is Fetterman's sonic love letter to a genre that he has never stopped adoring since he started being a musician. Coincidentally, this fine album arrives in one of the most inspired moments of the artist's career and it is a true mirror of Fetterman's artistic integrity and honesty. A very inspired body of work.