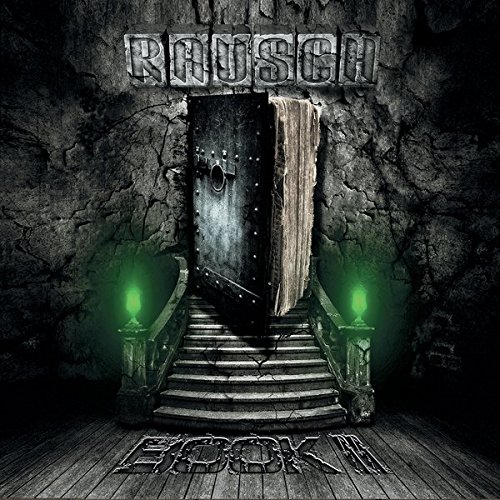 Rausch's second album, called Book II, is a definite step ahead in the collective's project to bring together 70's hard-rock and progressive rock sounds with fragments of jazz, americana, elettronica and pop, through a formidable sonic amalgama, at times full of pomp and circumstances.

Often packed with autobiographical lyrics displaying disarming honesty and vulnerability, the 9 songs comprised in Book II are an authentic musical feast for many music lovers. Armed with an impressive artistic background, the band member's skills shine throughout the whole of the record, through an incredible interplay among the musicians and the capacity to involve emotionally the listener on each of the album's tracks, by making every song sound like a mini rock opera, either in a traditional 4-minutes classic format or on a 10-minutes one.

The opener Greener Grass is a song that starts almost in a classical way, with piano solo and voice. The tempo of the tune then goes in a progressive crescendo, suspended half a way between pop and progressive rock, a little like one of the band's highest inspirations, the Queen, used to do in the first part of their career.

Book II has got many qualities. Rausch draw every song like a sonic mosaic, where they place, with minute accuracy, each frame of every tune with calculated precision, knowing exactly how to emphasize the lyrics of each of their songs by applying the appropriate sound carpet to it. It's a little bit what happens among all of the album's songs, with the tune called Irked, a song that, musically speaking, steps aside from the recurrent sonic texture of the whole album, with layers of electronica, jazz and americana, mashed up beautifully in one of the most inspired moments of Book II.

Every song tells a story and Rausch are certainly very good at it. Like they do on the song called The End, one of the most dark and atmospheric songs off the album. The song carries traces of mystery and mysticism within its sound texture, with the band showing, once again, a natural propensity on being able to create moment of pure sonic escapism, just like they cleverly do on this tune.

Among the many abilities showed by Rausch on their second effort, music lovers can certainly appreciate the way the band challenge themselves every time, by exploring the different sides of their individual background as musicians with very positive results. The song called Time Out is the closest that the band gets to music Nirvana, from a compositional aspect, by creating a song of breathtaking beauty and suspended musically half a way between The Beatles, XTC and Alice In Chains.

A deserved mention goes also to the closing track of the album, called Slow Suite II - Isolation, a tune that starts with a jazzy piano accompanying Doug Rausch's vocals, played with great grace and tenderness. At the same time also one of the most experimental tunes of the whole album, Slow Suite II - Isolation digs even deeper into the complex, musical motus operandi of a band constantly searching for the right sonic layers to be applied on each of their songs, always succeeding in doing so with surprising, remarkably results.

Some might say that, at times Rausch may sound too histrionic or self-indulgent, on their second album. The truth is that Book II is a record played, written and arranged with superb class and ability by a band that returned on the music scene with a record that is a true credit to their craftmanship and to their universal love for music. It took nine years to make this album and it was most certainly worth waiting this long

Book II is out now and it is available on Amazon