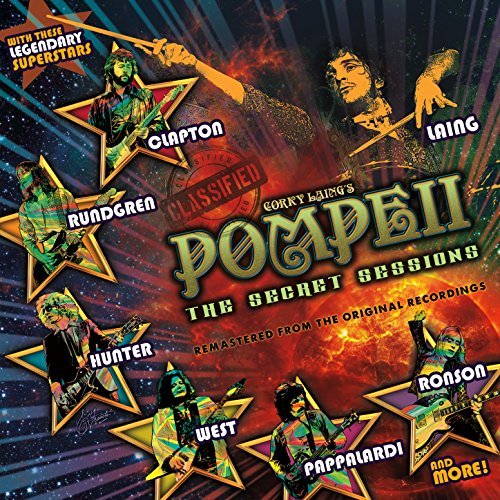 The 70's have been, without a doubt, a decade that has created a vital turning point in the history of rock and roll. The genre was progressively moving, during that time, into new dimensions and forms, from Progressive to Psychedelia, from Glam to Hard-Rock.

Many of the best records of all times came from this very important stage of rock & roll history and the genre was flourishing every day with new ideas, new incredible talents, new ways to move forward a music style so close to millions of people around the globe.

Right through the second part of the decade, just when the music industry felt that rock was moving towards a more raw and rebellious territory called Punk, drummer and singer Corky Laing, from the legendary rock band Mountain, was called from his record label to discuss, together with the perspective to be bailed by his label, the possibility to create a Super Group, in the attempt to regain the attention of rock fans that had so profoundly loved the glam and classic rock era. Laing, with no many choices left than creating this Super Group that he then called Pompeii, started working on finding the right music comrades that would share the journey with him in a record called The Secret Sessions.

Recorded between 1976 and 1978, The Secret Sessions saw Laing starting working on the project in conjunction with Mott The Hoople's Ian Hunter and producer Bob Ezrin, a partnership that brought in, as the initial embryo of the project, Free’s Andy Fraser, the Alice Cooper Band’s Steve Hunter, Lee Michaels and Ian Hunter. But then, just when things were starting going well, all the band members, apart of Laing and Ian Hunter, went to follow different projects, leaving Laing and Hunter only to deal with the mammoth task of carrying on the Pompeii's project.

When Laing was starting to lose every hope to bring the project to life, Hunter came up with the idea to invite on board guitarist and producer Mick Ronson (Lou Reed's Transformer, David Bowie's The Rise And Fall Of Ziggy Stardust And The Spiders From Mars), to which point Laing managed to convince one of his Mountain's band-mates, Felix Pappalardi, to join them and play bass guitar. This created new lymph to the project and an incredible array of Special Guests were called in to play on the record too; from Eric Clapton to Leslie West, from Todd Rundgren to John Sebastian, the elite of rock musicians were all present to support the making of The Secret Sessions, an album that was then completed in 1978 but never saw the light of the day, until now.

Released after 40 years of its completion, The Secret Sessions is a record of monumental beauty. Every minute element of each song, either from a compositional aspect or  arrangement wise, is absolutely pitch perfect. To pinpoint one or few magic moments within the record is absolutely impossible, because the whole album is a fabulously crafted journey into different shades of rock and roll, with layers of Southern Rock, Blues, Psychedelia and even Funk!

Where Laing's vocals and drumming run solid and smooth throughout the whole of The Secret Sessions, is the combustion of all the Special Guests participating on the record that ignites an extra spark to a masterclass album like this.

Ronson, Leslie West and Todd Rundgren's individual performances on the tunes The Outsider and The Best Thing are immense, Eric Clapton's guitar playing on On My Way To Georgia is as slick and suave as it can possibly be and guitarists Tommy Talton (from Cowboy) and Pete Carr are utterly superb on the tune Growin' Old With Rock & Roll.

Fundamentally, though, this is the record that belong to the artistic chemistry between Laing, Hunter, Ronson and Pappalardi, their ability and their forward thinking attitude. Their musical understanding, their timing and their capacity to encapsulate melodies of such high standards in the songs included in the album, like for example in I Ain't No Angel, I Hate Dancin' and Silent Movie, among many others, make of The Secret Sessions album as one of the most exciting record releases of 2018.

This might be a record that, musically, it may sound to the new generations of music fans as archaic and obsolete. The truth, instead, is that The Secret Session is one of the most beautiful, original and masterfully played musical time capsules ever released in the last two decades, a record that helps to understand and appreciate a fundamental time of music history, where rock and roll lived one of its most inspired and creative period. A musical gem hidden for too many years now revealed in all its finery to the world.