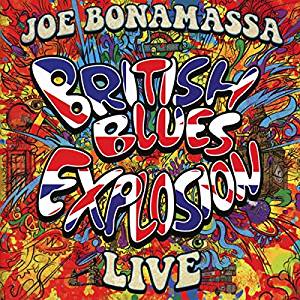 There is no doubts about the fact that American Guitar Titan Joe Bonamassa is one of the most skilled and talented blues/rock guitarist worldwide. As such, Bonamassa likes also to challenge himself continuously, motivating himself and his artistry by doing, from time to time, Tribute Concerts dedicated to those musicians that meant a lot to him, during his early years of guitar playing and perhaps, mean a lot still now.

The American Guitar Maestro has never hidden his love and devotion to a time where Blues/Rock reached incredible artistic peaks, especially in the United Kingdom, thanks also to extraordinary guitarists that, just as Bonamassa is achieving in modern times right now, wrote memorable pages of music history through the 70's.

It is no surprise, therefore, that Bonamassa would have done a show solely dedicated to the British Blues/Rock era, choosing specifically to cover what he retained to be defining moments of the careers of guitarists such as Jeff Beck, Eric Clapton and Jimmy Page among others.

Recorded in 2016 at The Old Royal Naval College in Greenwich, London, the British Blues Explosion Live album sees Bonamassa spreading his guitar wings in full stretch, splendidly supported on stage by his trusted collective that has accompanied him on Tour for quite some time, with Anton Fig on drums, Michael Rhodes on bass guitar, Reese Wynans on keyboards and Russ Irwin on rhythm guitar and backing vocals.

Bonamassa's choice of setlist is interesting and one may certainly appreciate that he did not go for what they might have been considered, at the times those songs were written, classics of the period.

The American Guitarist and Singer/Songwriter is not vocally at hundred per cent (maybe due to the intensive Tour schedule Bonamassa faces every year) but his guitar playing is sharp and powerful, just what you would expect from a contemporary giant of the instrument. Although indulging himself, occasionally, on some of the songs included in the set-list (the Bluesbreaker's Double Crossing Time), the show is packed with some truly solid performances, like in the opener Beck's Bolero/Rice Pudding, Spanish Boots and especially Plynth, one of the finest performances from the whole ensemble of musicians on stage during the first part of the show.

The second part of the show is, undoubtedly, the strongest one and it is also the one where Bonamassa and his band display all their musicianship at a very high level.

From The Cream's cover of SWLABR to Tea For One/I Can't Quit You Baby and, from what we feel it is the pinnacle of the show, Black Winter/Django to the closing How Many More Times, Bonamassa rises to his throne of contemporary blues/rock King Midas with style, class and more substance than in the first part of the show, biting every note coming from his guitar with passion and intensity.

The British Blues Explosion Live album maybe not the best ever live recorded by Joe Bonamassa, but it is certainly very close to some of the best live recordings (and he has done many!) he has ever released in his career. A record that certainly defines and confirms, once again, Joe Bonamassa as one of the most talented blues/rock artists worldwide.