ARMIES: Band Releases Follow-up to One of The Year's Best 15 Albums 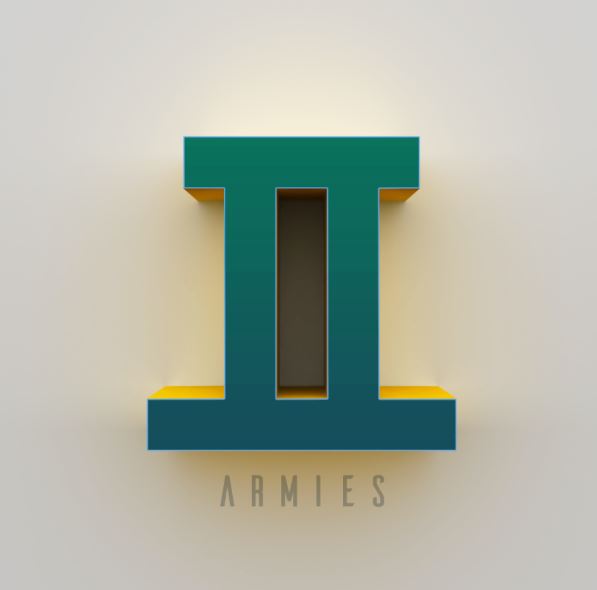 When the Portland, Maine duet, ARMIES released their self-titled debut album in 2015, Rolling Stone Magazine listed it as one of the year’s 15 great albums you didn’t hear.

Over the last three years, Dave Gutter and Anna Lombard have played out a lot in support of that recording. Along the way they’ve learned how to keep the nucleus of ARMIES focused in on its true north: Be ferocious lyrical adversaries— an Angel on one shoulder, the Devil on the other, and blend instrumentation into their artistic expression.

As a result, ARMIES has evolved into a powerful five piece band with the addition of Maine talents in Jon Roods (Rustic Overtones, Paranoid Social Club) on bass, Wurlitzer, Moog, Juno, Mellotron, beats and percussion, Ryan Curless (Chris Ross and the North, OHX) on drums and percussion, and Michael Koharian (Every Smith Ever) DJ's, and programs, samples and beats. ARMIES are accomplished and polished, as are the eleven songs offered on their sophomore recording, simply named, ARMIES II.

The French-Pop musical style heard on their debut plays but a minor role here. The narratives and melodies have matured and lean more towards mainstream alternative pop. It’s not your daddy’s mainstream pop, but cleverly crafted and addictive songs where many of the lyrics are based on the conversational dynamics of a couple, written as a duel between two attuned and compelling vocalists. Gutter’s seasoned vocals suggest whiskey and cigarettes and Lombard’s hint to Red Bull, wine and candlelight.

Little verbal battles and jabs of quick words unfold like a movie script. Each sigh and deep breath inhaled is heard through the microphone. One can only imagine the looks given, the fists waved. Still, it’s this arty attitude and acute sense of timing and delivery that defines ARMIES II. And like Bogey & Bacall, Burns & Allen, Gutter & Lombard have something special: chemistry.

Opening number, “Born Again” set the tone for the entire album with its upbeat tempo and easing groove. Lombard’s vocals are at her best: spirited and convincing, as are Gutter’s.

Lombard: “You told me that I hurt you, I could do the same.”

Gutter: “Instead of moving out your furniture, we can rearrange.”

“The Shrink” sees a storyline enriched by James Bond theme guitar and synth that burns slowly and deeper into memory. Below is an excerpt of the intricate dialogue exchange.

Gutter: “Just here to listen, I won’t judge you at all.”

Lombard: “I don’t need your opinion. Hell, I feel there’s no right or no wrong. Why should I tell all my secrets to someone I don’t know at all?”

Gutter: “Cause I’m the one you confide in, when your bigger perspective is small.”

A stark piano intro against Gutter’s raspy vocals enhance this lonely ballad of losing oneself on the web while missing out on real life. “Social Life” describes how social media has changed its user’s perceptions and lives.

“Ordinary Places” follows one man’s obsession with a woman he lacks the courage to approach. Now he can’t find her anymore in the ordinary places. The continual statement/rebuttal plays out line after line while the scene rolls in your head.

Gutter: “I used to see you on your way to work.”

Lombard: “It’s in the other direction.”

Gutter: “I took the scenic route so I could be with you, never could make connection.”

Lombard: “Pumping the brakes never would come to a stop.”

Gutter: “To ask you your name, I had to be brave.”

Lombard: “Instead you just circled the block.”

Gutter: “If I follow you home, it’s just to make sure you’re safe.”

What’s exceptional is when Gutter and Lombard sing together, they’re harmonies interwoven tighter than bark around a tree. “Nothing to Play With” is yet another example of the imagery ARMIES project through song. (Remember…it’s not your daddy’s pop.)

“I ain’t nothing you should play with. I was trouble when I came. You should have seen right through me. I’m the color of the rain.

The cure is on my tongue, but the poison’s on my lip.

I’m the voice that’s in your head. I told you from the start I’m beginning and the end. And I ain’t losing any sleep at night; I’ll just be in some other bed.”

A catchy ‘playing-on-a-radio-at-the-beach’ song, “Young Criminals” is about the innocent trouble young kids get into, those all-to-familiar rites of passage of yesteryear, and the fun of looking back as adults and laughing at the memories of being young criminals. Watch the video below.

“I remember when we were young, when the sun seemed to shine all day, stealing candy from the corner store.”

To give an honest review, I owe it to the artist, myself and the reader to really hear an album. Therefore, I’ve listened to ARMIES II exclusively for one week now. With each listen I was pulled deeper into the originality and arrangements.

For more articles on ARMIES, Dave Gutter read ARMIES: Playing With Friendly Fire, Where I'm From: The Dave Gutter Story.