Ben Poole - Anytime You Need Me 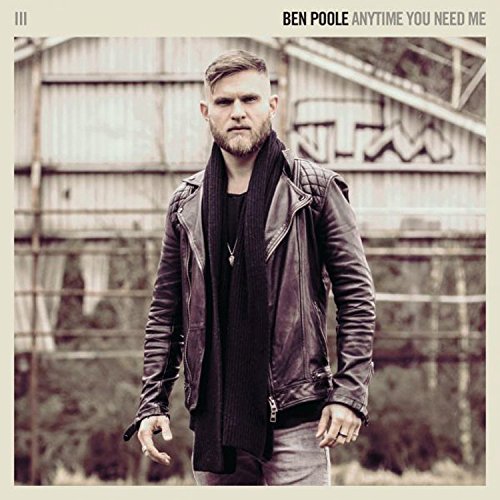 One of the most exciting aspects of looking at some music artist’s career histories is to see the way they develop their artistry at 360 degrees with each passing record.

On this respect, British guitarist and singer/songwriter Ben Poole continues his artistic growth album after album, giving every ounce of his many talents every time that he releases a new album. This talented musician from the South of England has gained an increasing popularity with fans and fellow musicians, through the years, thanks to a winning combination of solid songwriting skills, a vocal delivery that gets better and better as the years go by and his great ability as a guitarist.

While his past records were gradually building the platform for greater things to come, Poole’s brand new record, called Anytime You Need Me, captures the British guitarist and singer/songwriter at one of the highest points of his career, if not the highest so far.

Produced by King King’s drummer Wayne Proctor, Anytime You Need Me reveals the whole musical package that comes with this still young but tremendously skilled artist. The 10 songs included in the new record show in full Poole’s artistic progression maturated through the years, thanks to a blend of tunes that travel through all the music genres closer to the heart of the British artist, like Soul, Blues, Funk, Rock, R&B, with tinges of Roots here and there, to make the album sound even more palatable, if humanly possible, especially from a commercial perspective.

While a variety of genres incorporated in one record may sound disorienting to some, the truth is that Ben Poole dresses incredibly well every song of the album belonging to different styles of music, with some excellently crafted bridges and choruses. Ultimately, the outcome is that one doesn’t need to be necessarily a fan or a lover of a defined genre, to appreciate and love great quality music, when it is played and sang in the way that Ben Poole does, on this record.

Producer Wayne Proctor’s work in capturing the essence of Ben Poole’s full talent paid off big time, on Anytime You Need Me.  While many might have known Poole, initially, at the dawn of the guitarist’s career, essentially as a Blues/Rock and Soul artist, the new album displays instead an artist able to take a wider look at all his musical potential, with remarkable results. In that respect, Proctor’s experience in pushing Poole in many sonic directions, without compromising the artist’s inner instinct as a musician, has been a great advantage for Ben Poole, in the making of Anytime You Need Me.

As a singer, Poole’s vocal registry on Anytime You Need Me is very impressive, so much so that this aspect lifts the already great quality of the whole album a further notch up. The album’s title track that also opens Poole’s new record is, perhaps, the one that sums up best the British artist’s many abilities, as a musician. Poole’s excellently crafted vocals works magically well with the fabulous body of work of the studio musicians (including Proctor himself) playing on the guitarist‘s record, in a tune with a Blues/Rock matrix infused with crafty added rootsy layers.

Further On Down The Line is certainly one of the most fun tunes, sound wise, of the record, thanks to a performance that fuses the swagger of Poole’s Funk side with what is becoming the Blues/Rock signature sound of Poole’s guitar playing style.

Even when it comes to play covers on different occasions, while displaying respect for the original versions, on Anytime You Need Me, the British singer/songwriter successfully manages to make his own personal stamp on each of the songs very successfully. One of those, Don Henley’s Dirty Laundry, perhaps one of Henley’s most notorious and recognizable hits, is particularly well chiseled by Poole, through some superb guitar playing matched to a vocal delivery that is perhaps less raspy than Henley’s original, but still utterly well balanced and executed by an artist clearly enjoying himself and at the top of his game, on his new album.

Among the many great songs of the guitarist’s new record, a well-deserved mention goes to two Soul-tinged songs, You Could Say and Don’t Cry for Me. You Could Say may sound among the most radio-friendly songs that Poole has ever recorded but to our website, this song is one of the highest statements in Poole’s career about his ability of singing Soul music. The level of confidence displayed by the artist on this tune, both as a vocalist and as a guitarist, it is of a very high standard.

Don’t Cry For Me, together with reinstating the purity of Poole’s vocal chords, when it comes to Soul music, confirms the guitarist and singer/songwriter as one of the most naturally skilled balladeers of the Nouvelle Vague of English music artists. In a song packed with class, elegance and finesse in every aspect, Poole’s killer guitar solo that concludes the tune has got an incredible depth of intensity.

Anytime You Need Me is Ben Poole’s ultimate artistic statement. Given the young age of this ace musician, the future looks promisingly luminous for the music industry and for this very talented artist.

Anytime You Need Me is out now and it is available at Manhaton Records (www.manhatonrecords.com).