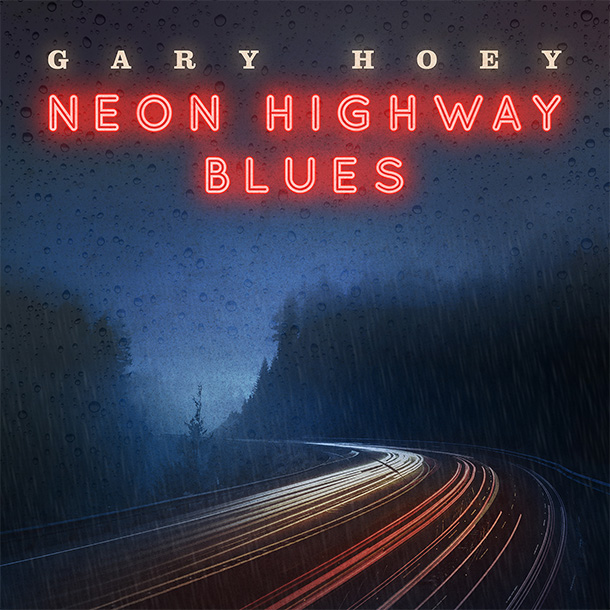 There is no such thing as a relatively easy record to make, when it comes to Blues, neither for a pure Blues artist nor for a Blues/Rock one. The presence of Blues songs in an artist's album always requires a certain amount of passion, dedication and soul to be applied to them, some inner pathos that encompasses the tunes both musically and lyrically, elements that are all needed to make those Blues tunes to sound true and credible enough to every music lover.

After the great success of 2016's album Dust And Bones, highly praised worldwide by the Music Press and his many fans, American Guitar Maestro and singer/songwriter Gary Hoey wanted desperately to incorporate some solid Blues vibes in his next career move. The extraordinarily talented guitarist has always been a notoriously hard working musician for all his life, therefore he used wisely every moment of the last 18 months following the release of the Dust And Bones album, while on tour, not just promoting the record but also writing new material and cementing friendships with fellow, highly talented musicians like Eric Gales, Lance Lopez and Josh Smith, for example, in order to enable Hoey to build the right platform that would help him building the aforementioned Blues vibes he was searching for.

It's not a coincidence, therefore, that Hoey's new album is called Neon Highway Blues, for different reasons. Once that the Blues tunes were found, the guitarist wanted also to include into his new record all the different layers of sound that have been Hoey's trademark for all his career, adding, at the same time, new sonic alchemy in this process. A pastiche of genres that would symbolize the making of extra lanes of sound in his own, imaginary but, from an audible perspective, highly palatable, musical Neon Highway.

There is a recurring theme about universal love, running into the lyrics of Neon Highway Blues, love between people and love for life. But rather than expressing the different manifestations of love through a constant, unique sonic stream, Hoey chooses instead very cleverly to associate the moods that he sets in his lyrics with music genres that would better represent the theme of each song, no matter whether it is Funk, Blues, Rock, Swing or even Calypso.

Despite Hoey's statement to the press about the making of Neon Highway Blues as an album extremely difficult for him to complete, the American guitarist and singer/songwriter is clearly in stratospheric form, on his new record, the 21st of his long and glorious career so far.

The first part of the record shows clearly how meticulously and hard the American guitarist has been working to display so brilliantly his knowledge and appreciation for a genre like the Blues. From the Funky-spiced Blues/Rock opener Under the Rug, featuring also Eric Gales, to the highly entertaining and Swing infused Blues of Still Believe In Love, the American artist grabs masterfully the listener's attention in full and takes him/her to a fun-packed joyride in what is Hoey's vision of Blues in all its angles.

The guitarist is very much enjoying himself, on his new record. Hoey's Resonator shines in all its beauty through the notes of Your Kind Of Love, a tune where the tradition of the Chicago Blues sound and the Boogie of the 60's marry together in a match made in heaven, not only through the sound of Hoey's guitar but also through his vocal performance, a skill where the guitarist and singer/songwriter gets better and better on each passing record.

Don't Come Of Crying is a killer slow Blues number that sees two generations of the Hoey's family, with the guitarist's young son Ian making a remarkable debut and showing highly promising skills on an instrument where his father is already clearly a master. At a certain point of the tune, it becomes almost imperceptible the difference between the guitar sound of father and son, something that says it all on the future of young Ian Hoey.

The second half of Neon Highway Blues is equally, if not, even more spectacular than the first part. Everyone familiar with Gary Hoey's songbook is fully aware of how much this incredibly talented guitarist is able to deliver high musical standards even when he plays instrumentals only. In that respect, who is going to buy Hoey's new album is in for a further treat. Waiting On The Sun, the closing album's title-track and especially Almost Heaven are masterclass pieces of sheer beauty, where Hoey's guitar sound speaks deeper than words.

But any of Gary Hoey's record wouldn't be complete without the artist showing in full the Rock side of his artistic soul. Living The Highlife and I Felt Alive are energetic, heavy and full of power, displaying that natural swagger and charisma that this incredible artist possesses through the sound of his incendiary guitar.

Neon Highway Blues might have been a difficult record to do for the American artist but to us, it proves once again not just the huge talent of the guitarist and singer/songwriter in every aspect of his artistry but also his level of maturity as a musician and, most importantly, the will of taking risks and challenge himself musically every time and being able not just to succeed, but also to reach new highs on each passing record. Gary "Steamroller" Hoey has done it again.