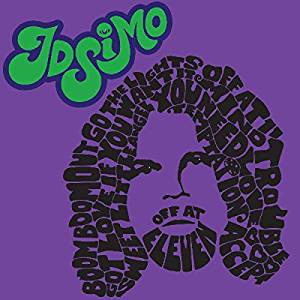 There is no such thing as Art not being related to freedom of expression, especially when it comes to music. Often, though, the will of an artist, in this case, a musician, at times needs to compromise between different factors, such as what an artist really wishes to express through music, what his/her fans want to hear from such musician and what the record label is prepared to invest on something that cannot guarantee necessarily a financial return, no matter the depth of quality expressed by the artist's record.

The concept of uncompromising Art expression is something that adheres perfectly to the vision that American Guitar Master and singer/songwriter JD Simo has of music. Simo is one of those very rare artists (in every possible meaning of the word) that, since the beginning of his career, has always shown through his records that he would never, at any cost, betray his musical heritage and trade it with something else that doesn't belong strictly to his personal taste and appreciation.

The last two studio albums released with his band Simo, Let Love Show The Way and Rise And Shine, had deservedly attracted, between 2016 and 2018, the general attention of the press and public a notch further than any of the band's previous releases had done before, thanks to their irresistible sonic pastiche of 70's Psychedelia, Funk, Acid-Rock and Blues, cleverly conceived by JD Simo's musical skills and his idea of what proper music should sound like.

With this in mind, the expectations on what the next artistic move of the guitarist and singer/songwriter would have been were huge, given the high musical standards that JD Simo had set with his band through the last two studio releases.

The answer, in JD Simo's mind was pure and simple; do what you want to do, play what you feel more natural and inclined to play and, most importantly, show, through your music, where the roots of your sound come from and where they are taking you to.

That might have been, most likely, what came to mind to the Chicago-born artist when he released, on March 1st, his first solo album called Off At 11.
Recorded in just three days in a very short break from touring, Off At 11 is the ultimate artistic statement of an extremely talented musician, wise enough to display the appreciation of where his love for music came from, by paying great respect to it and, at the same time, showcasing the infinite routes that those sounds may stretch to, just like an aeroplane would be able to do, when taking off from the ground.

Love is certainly the key word, in Off At 11. Love not only for people and life in general but first and foremost, for music. There is the heart and soul of a true music lover, running through the guitar sound and the vocals of the American artist and each and every of the eight tracks included in this contemporary sonic jewel represent a breathtaking journey into the world of an artist whose view of where his music can take him to is in constant evolution on each passing record.

Supported splendidly by that visionary drumming wizard that is Adam Abrashoff (part of the Simo collective) and the highly skilled bassist that is Luke Easterling, JD Simo's wall of sound throughout Off At 11 is thunderous, evocative, exciting, often escapist and at times even lysergic but always executed with extraordinary class and style.

The whole record is a true lesson in music that not even a Harvard Professor would be able to express in a better way than the one displayed by Simo and his musicians. There is the sound of the Delta Blues emerging through the covers of the Little Walter's album opening Boom Boom, Out Go The Lights or through the stunning execution of B.B. King's Sweet Little Angel. There is also the Blues sound of Simo's native hometown Chicago displayed in an amazing number called You Need Love, where, in its second part, the tune turns into a magnificent tribal assault to the senses, with the guitarist and Abramshoff expressing their individual musicianship at a truly remarkable level.

Who is already familiar with JD Simo's musical vocabulary, knows though that while the Blues is an important part of the musical formation of the artist's background, there are many more influences running not just through the songs included in Off At 11 but also, fundamentally, into the DNA of this very talented musician.

There are the Jazz/Rock influences coming from the sound of bands like The Mahavishnu Orchestra or King Crimson, flowing into an instrumental jewel that is the title-track of the album or traces of Grateful Dead and Crazy Horse's 70 Acid/Rock and Psychedelia emerging through Slim Harpo's cover I Got Love If You Want It, where the closing part of the tune merges into a stunning, grandiose psychedelic finale that allows Simo and his musicians to travel along sonic highways of pure, delightful improvisations.

What joins together all the dots of this album, though, is the magnificent and magniloquent 17-minutes long closing tune called Accept. Lyrically, this is undoubtedly one of the best songs the Nashville-based artist has ever written to date (...accept what you've got but don't settle for what is not....). Simo and his musicians also show, once again, their individual talents at their very peak, by putting together a series of fascinating and erratic musical vignettes, merging from Acid/Rock to Psychedelia to Alt-Rock with disarming ability, in this eponymous finale of an album of majestic artistic proportions.

When you will be buying Off At 11, please remember that you will be not just buying and enjoying just another record. Because what you will be listening, without fear of exaggerating, is one of the best records of the last half a century of music history.