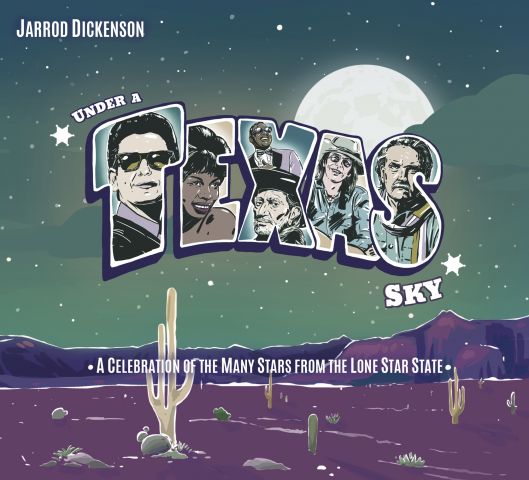 Often music artists decide to covers songs from other artists solely because they need to fill gaps on a new studio album that might need one-two songs to be completed, choosing tunes that might be close to the style of music that they play but not necessarily be emotionally close to their souls.

It is therefore rather refreshing that Texas-born Troubadour Jarrod Dickenson decided, through his new project, an EP called Under A Texas Sky, to pay tribute to some of the state's music icons that Dickenson respects and love.

The choice of the songs handpicked by the Nashville-based artis is highly interesting. Dickenson has, very wisely, not gone for obvious tunes that have been covered by several fellow music artists through the years but rather for songs that speak directly to Dickenson's heart, more than anything.
In view of the latter, the Texan singer and songwriter has also carefully respected the different musical arrangements in which those songs were originally released, adding just his extraordinary ability and talent as a singer, something that our website had already highlighted while reviewing Dickenson's previous studio album Ready The Horses.

Jarrod Dickenson has already proved, on past records, to be very at ease in singing and playing different music styles and one of the reasons is because every song he chooses to sing and record has got a meaning to the artist himself, no matter the genre. It doesn't, therefore, come as a surprise to hear, on Under A Texas Sky, Dickenson covering splendidly Blues and Doo-Wop, like on Roy Orbison's Uptown, for example, or on Doug Sahm's I'm Glad For Your Sake with the same vocal intensity and depth with which he sings on a Country masterpiece that is Ray Charles & Willie Nelson's Seven Spanish Angels.

The singer/songwriter has surrounded himself in studio, once again, on this new release, with first class musicians, including his long time friend and collaborator JP Ruggieri on Electric Guitar, Michael Bellar on Hammond Organ, Josh Hunt on Drums and Ted Pecchio and the Ward Sisters on Backing Vocals.

Under A Texas Sky's closing is as stylish as the whole of the record truly is. Dublin Blues is a Guy Clark's tune that Dickenson has been playing live on stage for the last couple of years with his wife Claire, a song that carries many of the values close to the core of Dickenson's artistry and clearly reflects, through Dickenson's exquisite vocal delivery, the extent of the Texan singer/songwriter's talent.

Dickenson's new project is not only a profound and heartfelt homage to the amount of incredible musical artistry coming from the Lone Star State but also a true mirror to the Nashville-based musical roots. A record that comes straight from the honest soul of one of the freshest, most inspired and talented artists of the last decade

Under A Texas Sky is out now and available via Amazon