Maybird - Things I Remember From Earth 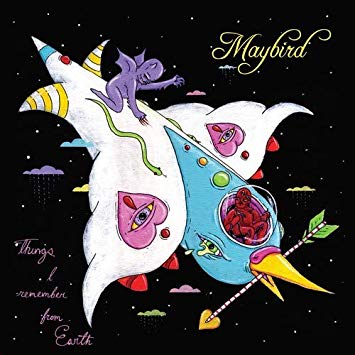 The fact that a band would choose to name their debut album taking the cue from one of Kurt Vonnegut's science fiction satirical novels, the 1959 book The Sirens Of Titan, is already a very intriguing aspect in itself, even prior to listen to a highly entertaining record like Things I Remember From Earth, from the American quartet Maybird.

Released under Danger Mouse's record label, 30th Century Records, Things I Remember From Earth marries contemporary alt-rock and psychedelia in an irresistible musical combo that take the listeners in a fascinating journey into an imaginary, sonic outer space filled with many great compositional ideas.

Creative brothers Josh and Adam Netsky, respectively guitarist and drummer, two musicians that have been part of Rochester music scene for some time, had been searching for a while to add that final push to lift their artistic vision, by adding new members to their musical project, something that they finally achieved by adding to their line-up two extra guitarists of great talent like Kurt Johnson and Sam Snyder, completing in this way the band's line-up.

After they signed for 30th Century Records in 2016, releasing two EPs, Maybird's first full-length record Things I Remember From Earth is a body of work that surprises, excites, amuses and curious the listener throughout the 10 songs included in the album.

Often, during each of the Things I Remember.. songs, there is the distinctive feeling of travelling side by side with the band, both in a lyrical and musical way, between time and space, almost suspended in the air half a way between the sky and the ground, trying desperately to hold on to those memories that we had from childhood without letting the almost sci-fi modern society we have created and all live in to suck us into it, allowing us human to keep our sanity and help to prevail over this highly technological world we are all part of.

Sonically, Maybird create, on their debut album, a kaleidoscope of inspired escapism through their variations of tempo and use of various instruments applied to their songs, with their some times dreamy and other times psychedelic sounds exploding like beautiful, colorful and sparkling fireworks.

From the electro-pop of tunes like the opening In Technicolor (For The First Time) Montreal and Gonna Lose Your Mind to ethereal, nostalgic and packed with great melodies songs like Nothing Lasts Forever and The Damages, among others, Things I Remember From Earth displays not just the remarkable artistic skills of the four musicians but also a deep understanding and appreciation of American music of the last half a century combined with Maybird's innovative and alternative musical style.

Given the fact that Maybird is a collective made by three guitarists and a drummer, what the American band has produced on their debut album is breathtakingly beautiful. Things I Remember From Earth is most certainly one of the most refreshing and reinvigorating albums of this year so far.