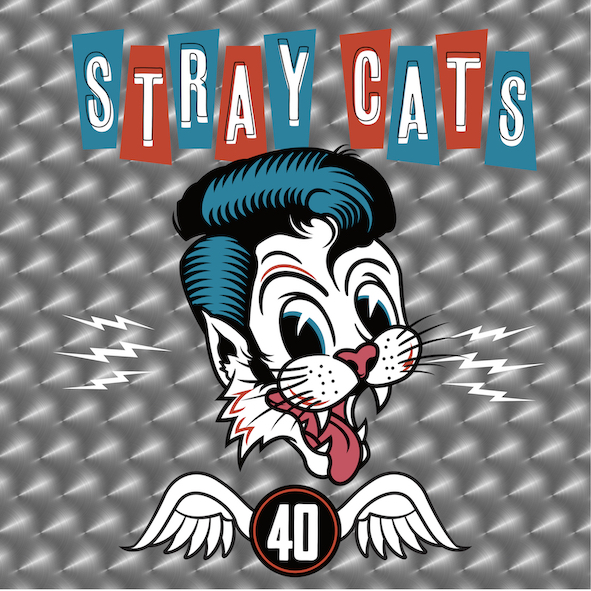 Sometimes, some music producers tend to be hyper-cool about the artists they are working with and their records and often, they come out with grand adjectives to define a new body of work and the quality of who makes such records.

As an exception, producer Peter Collins got it absolutely spot on, when describing the time he was working with Rockabilly Heroes Stray Cats, on the making of their new album called 40, due to be released on 24th May, by saying: "There's something very special about Stray Cats; nobody else sounds like them".

That is very true. Since their debut album, released 40 years ago (hence the "40" new album title), Brian Setzer, Lee Rocker and Slim Jim Phantom have always been true to their music style, never pretending to sound like those who inspired them in the beginning of their career, like Gene Vincent or Eddie Cochran, among others, but rather maintaining their own blend of Rockabilly and 50's Rock'N'Roll that separated this splendid collective's sound from the rest of the world.

After an hiatus of 25 years, nobody was expecting a new Stray Cats record. Instead, here it comes! The idea of making a new record together came from last year's Reunion Tour, when the band got such a triumphant feedback from press and fans, to the point that they decided that the time had come to get back to the studio and make a new album together.

Stray Cats set quite a high bar, throughout their whole career, when thinking about the millions of records they sold with albums like Gonna Ball and Rant'N'Rave, therefore, the expectations about the new record were huge.

40 does not disappoint in the slightest; it rather excites to hear a band like the Stray Cats still sounding so fresh and, in some respects, even more creative than their 80's heydays.

The idea of creating an organic sound by working and recording all together in the studio certainly paid off and it gave to the songs included in 40 that feeling of a studio/live performance, with the three musicians assembled in the same room and recording their songs on the spot as a collective.

The spark ignites pretty much at the start of the record with the album's opener Cat Fight (Over A Dog Like Me), an irresistible fast and furious foot-stomping tune where the band clearly shows that their musical artillery is still all there, in all its glory and power.

And when it comes to Rockabilly, as the album producer announced prior to the album's release, nobody does it like the Stray Cats. Three Time's A Charm, Rock It Off and especially the amped-up Mean Pickin' Mama are among the coolest tunes that the band has crafted for quite some time.

Even when Setzer's vocals may sound not as strong as they used to be on a couple of the songs included on 40, his guitar sound makes it up for it big time, in many moments on the record.

True to be told, it is quite special to hear the way that Setzer, Rocker and Phantom still manage to create together a wall of sound of such magnitude, as shown so beautifully on 40. Setzer's excellence as a guitar player shines particularly strong in high-tempo rock songs like That's Messed Up and I'll Be Looking Out For You. Slim Jim Phantom's drumming style is as powerful and as fascinatingly menacing as you can expect from a Rhythm Master like him, with its highest peak of perfection on the closing tune of the album, Devil Train. Lee Rocker's swaggering upright bass playing style constantly crafts, through its chords, that perfect sonic bridge between Setzer and Phantom, as shown on a remarkable level of musicianship in a tune like I've Got Love If You Want It.

It may sound like a curious note that, in our opinion, the three musicians amalgamate extremely well, on 40, their extraordinary skills in an instrumental, dreamy tune like Desperado that would fit rather perfectly as part of a soundtrack of one of Italian Film Director Sergio Leone's early Spaghetti Western movies but that shows, once again, the incredible musical understanding that Stray Cats possess, even when they are not necessarily playing Rock'n'Roll.

Watch out, the Cats are back with a vengeance! Given the level of brilliancy and the amount of sonic fuel left in their tanks, as shown on their new record, let's hope they will stick around still for many years to come. Music just wouldn't be the same without Stray Cats.