Sean Taylor - The Path Into Blue 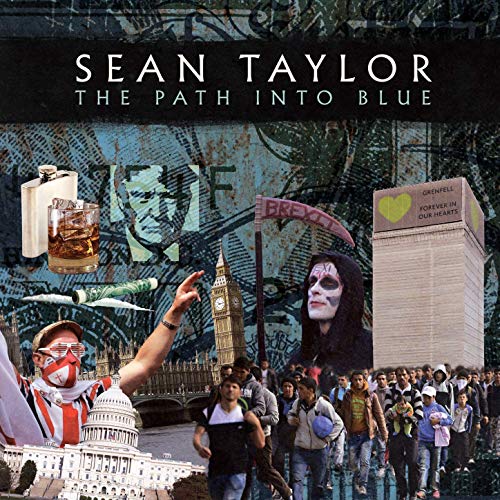 One of the many secrets about being a skilled songwriter, for a musician, it has always been that capacity to maintain, through the artist's lyrics, contact with the reality that surrounds our everyday's life in the most truthful and honest way.

In that respect, British Troubadour Sean Taylor, one of the most versatile, refined and interesting singer/songwriters of the current English music scene, has certainly hit the spot on his brand new album, called The Path Into Blue.

While in Taylor's last studio efforts, The Only Good Addiction Is Love and 2017's Flood & Burn, often the artist was lyrically showcasing themes related to love, hopes and disillusions, The Path Into Blue is an album where Taylor, despite maintaining his usual extraordinary musical elegance, he eloquently expresses his anger towards issues related to his native country (and, occasionally on a wider scale too) and themes related to politic, immigration, poverty and addictions in general.

The English singer/songwriter has certainly had the opportunity, in recent years, whilst touring the world with his music, to see some harsh realities taking place all over the globe. Given Taylor's sensibility towards those that cannot defend themselves, it felt almost inevitable for him to use his next body of work as a manifesto not only to confirm his ability, as a musician, but also to underline what is true and what is fake, in our everyday lives and the amount of solitude and loneliness that what we name "modern society" carries within, unbeknown to us.

Taylor's musical approach in describing said issues is showcased, as always, in a very elegant and, at times, also minimalist style, through multi-faceted musical layers of Folk, Jazz and Roots, using his strong narrative skills to incorporate social themes close to his heart, through his signature singing style, half a way between a Parlato type and a very low-key, almost whispered one.

Maybe one can have different views, on the issues raised by Taylor through his songs, about the state of the current politic in UK (This Is England, Grenfell) or worldwide (the satirical Little Donny) but it is undeniable the fact that the singer/songwriter never hides from reality and doesn't hesitate to tell it as it is, like it does so well in a song about the tragedy of immigration, which is Lampedusa.

Among the many inspired songs included into The Path Into Blue, there are a couple of tunes that, to our websites, display in full the great storytelling talent of Sean Taylor, called Tobacco & Whiskey and the album's title-track, which also closes the album. Two splendid songs about the struggle of addictions in various forms (Tobacco & Whiskey) and about the end of love and solitude in general (The Path Into Blue).

Through his brand new album, Sean Taylor keeps on growing under many aspects, musically and lyrically and his artistic path seems to mirror perfectly the type of journey that the British artist is embarking right now. The Path Into Blue is an album that brilliantly defines an important step in the career of one of the most talented and inspired artists coming from the United Kingdom. And the name of that artist is Sean Taylor.