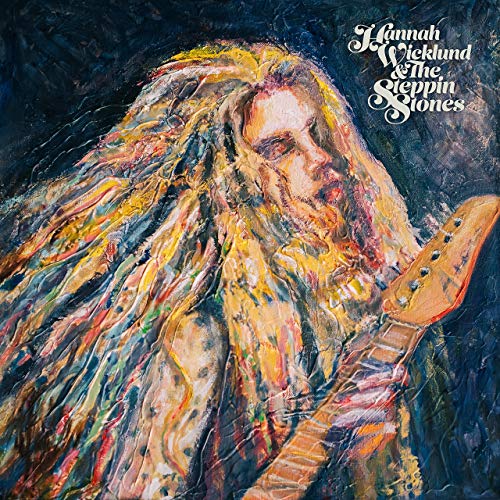 There is an old saying about the fact that it is never too late for great things to come and this is no exception for music too. After a year from its release date in the United States, finally Europe gets to hear too the new self-titled record of one of the most exciting bands around, Hannah Wicklund & The Steppin' Stones.

Despite the average young age of all the band members, (front-woman Hannah Wicklund, 21, has started performing live age 8 and this record is the band's third release), what has been achieved on the band's new album is highly impressive, not just in terms of the collective's strong musical cohesion and unity but also for the remarkable quality of the songs present on the record.

A very robust part of the power energy of the band comes, undoubtedly, from the band leader Hannah Wicklund, especially for what concerns the songwriting aspect (although the album's producer Sadler Vaden had co-written most of the songs with Wicklund) of the record but also for Wicklund's great talent as a guitarist and as a singer too.

One of the many plus points of Hannah Wicklund & The Steppin' Stones, together with the high quality of the album's songs, all packed with excellent bridges and choruses, it is the type of musical approach taken by Wicklund and the band throughout the whole record. From the opening tune Bomb Through The Breeze, with its layers of 70's Psychedelia, 60's Soul and snippets of Southern Rock through the emotional, semi-acoustic ballad that closes the album Shadow Boxes And Porcelain Faces, Wicklund & The Steppin' Stones catwalk with effortless ability and power from said genres to Blues/Rock and Rock'n'Roll too, building an intelligent and well structured sonic mosaic that makes the album's overall sound never obvious but, instead, it surprises and captivates the listener on each track.

What also stands out, on the American band's new album, is the amazing vocal strength of Hannah Wicklund, a singer that goes from strength to strength on each and every song included into this very intense and powerful record. A singer also able to deliver on an emotional level, like she does especially well on songs like Strawberry Moon, Meet You Again and Ghost, where Wicklund delivers the full package about her ability as a singer and as a songwriter.

Hannah Wicklund & The Stepping Stones may clock off perhaps too prematurely, after just little more than 38 minutes but fear not, because this is an album worth every penny. This is the new record of a band that will grab your attention from the opening notes of the album, sucking you in completely right through the very end, by giving you all that this excellent collective has got, as musicians; their power, intensity, passion and all their insane talent, right now, in the current music scene, is second to none.

All that you will need, for this record, it is to buy it, enjoy it, to open your arms and embrace Hannah Wicklund & The Steppin' Stones' music. You won't regret it.