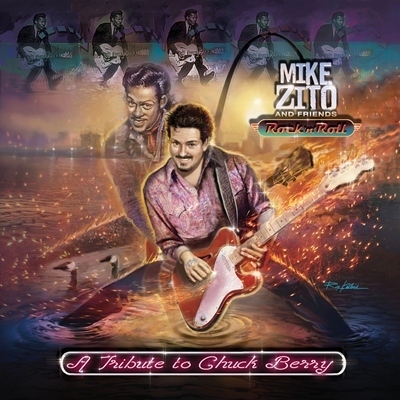 With one year in the making, Rock'N'Roll: A Tribute To Chuck Berry comes in one of the happiest, most inspired and creative stages of Mike Zito's career, following the huge success of his latest studio album, First Class Life, a record that confirmed Zito as one of the most prominent and prolific Blues/Rock of this generation.

Supported by a stellar cast of Special Guests on each of the 20 tracks included in Zito's new release, Rock'N'Roll: A Tribute To Chuck Berry is a pyrotechnical showcase of Blues, Rock'N' Roll and Boogie, played and sang at extremely high level of quality, both from Zito and the artists participating to this splendid tribute album.

To handpick few highlights is a highly difficult task, due to the breathtakingly intensity of an album like this. The energy, the positive vibes and the amount of fun exuding from covers like Johnny B Goode with Walter Trout, Let It Rock with Jimmy Vivino, Promised Land with Tinsley Ellis, Thirty Days with Albert Castiglia or Reelin' And Rockin' with Tommy Castro, it may just give the idea of how exciting the record gets, song after song.

Among the many positive aspects of a massive project like Rock'N'Roll: A Tribute To Chuck Berry, there is also the huge amount of care applied by Zito and Friends on some of the tunes of the album, where Chuck Berry's original versions have been still respected but slightly tweaked by Zito and Co., without altering the structure of the originals.

On that note, songs like Havana Moon with Sonny Landreth, where the tempo of the tune reaches almost an Hawaiian, dreamy feeling or the high fuelled version of Brown-Eyed Handsome Man with Kirk Fletcher & Josh Smith, where the three artists combine, through their individual guitar abilities, a version of this classic of outstanding beauty, are the perfect example of the amount of dedication and care that has gone on the making of this record from an artistic perspective.

Above all, a solemn and highly deserved "Bravo" goes to Mike Zito, who is also producer of this extraordinary musical project. The quality of his vocals and Zito's ability as a guitar player here reach a new high, especially when measured and compared with the caliber of many of the Guest Artists present on this record.

You don't need to be of a certain age range or an expert in musicology, to cherish and love a record like Rock'N'Roll: A Tribute To Chuck Berry. This is one of those feel-good records that you can listen again and again in years to come and never get tired of, because it carries a level of talent and musicianship of exceptional stature. Mike Zito has not only, through this record, paid homage to an exceptional artist like Chuck Berry in the classiest and most refined style but he also reminded us the immense power that Rock'N'Roll carries within. That power that, as Neil Young once sang, "Will Never Die".

Rock'N'Roll: A Tribute To Chuck Berry is out now and it is available to be purchased via Ruf Records