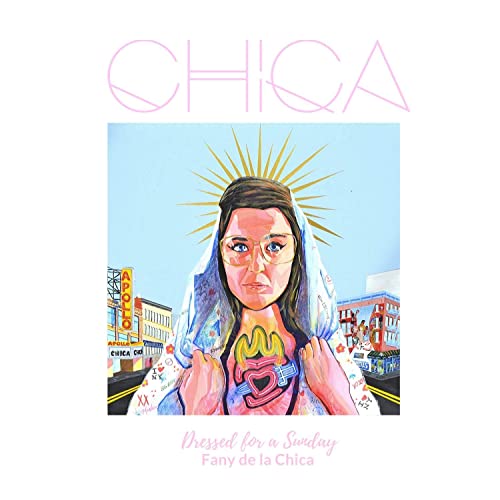 De La Chica, who spends her time between her native country Spain and the United States, has discovered, through the years, that creating art shouldn't be solely confined to successful film-making, but also by writing the scores for her own films, in order to complete the visual aspect of her body of work, by adding melodies and lyrics to an already strong narrative platform.

This might have been as well the conceptual starting point, for the Spanish artist, of Dressed For A Sunday, a record that displays very well the broadminded vision of De La Chica, when approaching music.

Under a storytelling perspective, the record follows chronologically the story of a 12 hours Saturday night out of a young woman, that, following a break-up with her boyfriend, decides to free completely her senses to casual sex with strangers, drinking or any other temptation available to her, so to be able to calm her bleeding heart, after being left by her boyfriend.

While the songs' lyrics are often very direct and straight-to-your-face, there are a lot more exquisite aspects to keep in mind, when listening to De La Chica's debut album. There is real passion, in De La Chica's first musical offering, a passion that exudes from her remarkable vocal range and by the choice of the arrangements and the genres chosen for the album's songs.

De la Chica uses different music genres to describe her thoughts and feeling in each song, a bit like following a reverse process to what the Spanish artist normally does, when making films. In that respect, one can look at Dressed For A Sunday as a concept album, where each music style actually follows what is going on into the artist's mind, song by song.

Some may find rather unusual to find, in the same record, genres like 80's Electro-Pop, Jazz, Flamenco and Trip-Hop but the moment you give this highly eclectic and fascinating record a couple of spins, it will all make perfectly sense to you. In addition, De La Chica's choice to sing in both Spanish and English enhances also the desire for the Singer/Songwriter to transmit to her listeners not only where the roots of her musical background come from, but also that music cannot and must not be limited to an only genre for commercial reasons but it rather needs to serve the true purpose of its meaning, which is, in her case, being the soundtrack of De la Chica's own stories.

The Spanish artist surrounded herself by many talented studio musicians too, on Dressed For A Sunday, something that paid off very well especially, in our opinion, on songs like How Can You Forget, Tengo Miedo and in particular, on Y Canta Al Alba, a take on contemporary Flamenco where the swagger, the intensity and the strength of De La Chica's vocal delivery is truly remarkable.

Dressed For A Sunday is one of those rare records to listen carefully and more than once, in order to be fully appreciated and loved, as it deserves. Beyond the immediate lyrical urban rawness expressed by the Spanish Singer/Songwriter, there is an artist that has fully understood the concept of using Art to her own advantage, by adding to her fabulous singing skills and De La Chica's direct and, at times, irreverent songwriting style, the right layers of music needed to manifest her feelings every step of the way, with very convincing results. A truly fascinating record.