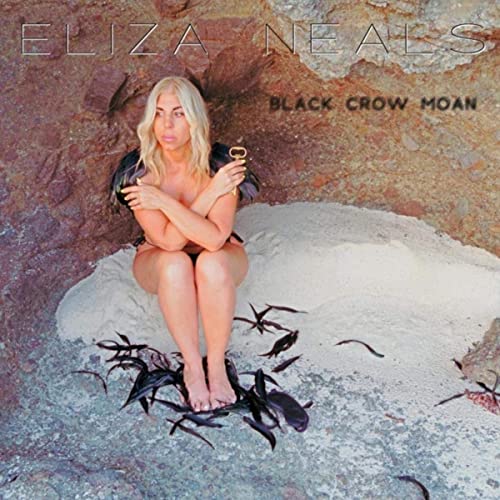 It's perhaps the most difficult time, in the history of the world, for a music artist to work on new songs and to find the necessary energy and inspiration to be able to lift their creativity to the next level.

Detroit's Powerhouse singer/songwriter Eliza Neals, following the unanimous, huge appreciation coming from fans and music press all over the world, about the 2017 album 10.000 Feet Below and, most recently, for the 2019 Sweet Or Mean EP, must have been feeling surely very eager and excited to release her self-produced and arranged brand new record, called Black Crow Moan.

Eliza Neals had all the reasons in the world to be feeling in that way. The American artist surrounded herself, on the making of Black Crow Moan, with some of the finest musicians in the Blues/Rock world, from a Master of the genre, like Joe Louis Walker, to other hugely skilled musicians like Mike Puwal, Howard Glazer, Jason Kott, Brian Clune or Derek St. Holmes, just to mention a few.

Black Crow Moan is certainly a step ahead in the fascinating musical journey of an artist like Eliza Neals, who never stops challenging herself, both as a singer and as a songwriter. In that respect, the American artist's new album is certainly the one where her confidence into Neals' songwriting skills and incredible talent as a singer, it allowed her to take a further musical leap into sonic territories like straight Rock and Roots, often, with great success.

The opening 1-2 of the record is Vintage Eliza Neals, thanks to a foot-stomping tune like Don't Judge the Blues, where all of Neals' charisma, vocal power and swagger emerge in all their beauty, with Mike Puwal on guitar adding some really memorable guitar riffs to a very inspired tune like this.

Why You Ooglin' Me, a slow Blues tune that follows the album opener, it displays why this artist has earned, through the years, the admiration of so many fans all over the world, thanks to a strong, deep, powerful, passionate and soulful, at the same time, vocal delivery on this splendid song.

The album's title-track is one of the most fascinating songs off Neals' new record. Accompanied by Joe Louis Walker on guitar and vocals, Black Crow Moan blends beautifully Blues and Soul and it allows Neals' vocals to flow effortlessly into different ranges, by lowering down and elevating the intensity of her vocal delivery, throughout the whole tune, with a mesmerizing agility.

Even when Eliza Neals gets on board of the Roots and Rock boat, the outcome is truly remarkable. While River Is Rising clearly shows how much at ease the Detroit-born Powerhouse is, in chiseling her vocal delivery perfectly, on this Rock ballad, where Howard Glazer also pens an incredible guitar solo, it is on the following tune Run Sugar Run that Neals reaches the artistic pinnacle not only of another inspired album, like Black Crow Moan, but also of her whole career to  date, as a singer and songwriter.

Run Sugar Run has got it all, as a song; irresistible melody, greatly crafted lyrics, anthemic bridges and choruses and Eliza Neals' unmistakable, thunderous, vocal delivery. All musical ingredients that will certainly make, of this song, a very palatable radio-friendly tune and a further great platform for an unstoppable artist like the singer/songwriter.

Eliza Neals, though, is not only an artist that commits herself completely and deeply to the art of music, but she is also somebody that likes to take herself not seriously all the time, showing the eclectic and fun side of her personality on the closing tune of the album, called Hey, Take Your Pants Off, a cheeky and catchy tune that adds an extra layer of entertainment to another inspired album in Neals' discography.

Black Crow Moan is a record that truly symbolizes the whole of Eliza Neals' artistry and personality, reflecting also accurately the growth of an artist continuously looking to expand her musical vocabulary. Another very fine record from one of the most inspired and talented Blues/Rock singers around.