Fabrizio Poggi - For You 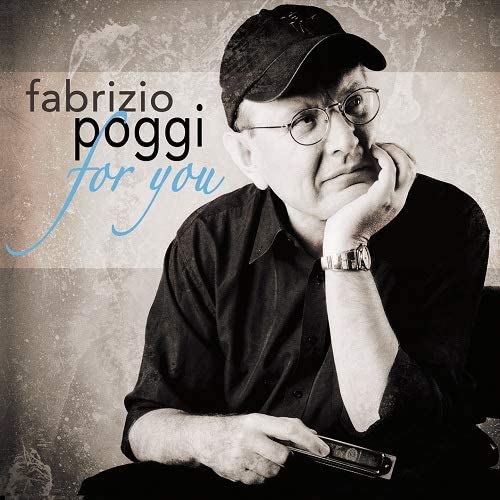 Nobody would have ever predicted that, back in 2018, an Italian Blues artist would have reached a nomination to the most prestigious music award on earth, the Grammy Music Awards, particularly in a genre for which Italian music is not commonly associated with.

But when it comes to Harmonica Maestro and singer/songwriter Fabrizio Poggi, nothing seems to be unachievable, not even taking the Blues, with his fellow friend and hugely talented too Blues Artist Guy Davis, to the Red Carpet of music business with an album like Sonny & Brownie's Last Train.

For years, Poggi has developed and mastered a unique musical language that combines the Mississippi Delta Blues traditions with different others coming from other parts of the United States, like Tennessee, Texas and Louisiana, in a format that allows the Italian Artist to express his deep love for Gospel and Spiritual through heartwarming melodies, surging from his remarkable skills as an Harmonica player.

The Italian artist, after many years spent exploring the roots and the core of a genre so close to his soul, had long thought on how he could expand and enrich his great admiration for the genre in other directions, by still being able to maintain his trademark Blues Harmonica sound and building around it a palace of new sonic layers that would embrace elements belonging to different styles like Folk, Jazz, Rock, Roots and many more.

Poggi's plan has most certainly paid off and in such an impressive fashion, on his brand new record! His 23rd album, called simply For You and coincidentally released in the week where the Italian singer/songwriter celebrates his birthday too, it is a mesmerizing record not only because of the overall quality of the songs included in the new album but also for the imaginative and seductive musical approach taken by Poggi, in the making of For You.

In order to allow Poggi's music to expand into new sonic territories, the Italian singer and songwriter has, for the first time in his career, worked with an external producer, Stefano Spina, a multi-instrumental artist who had previously collaborated with Poggi, solely as a musician, on earlier Poggi's records.

Spina's contribution, on Poggi's new album, has been very important, in terms of writing all the arrangements for For You and also for being one of the major driving forces in directing the very talented cast of studio musicians playing on the Italian artist's new record, like his long-time collaborator Enrico Polverari on guitar, Stefano Intelisano on piano, Pee Wee Durante on organ, Luca Calabrese on trumpet and Tullio Ricci on saxophone.

For You incorporates some of the most profound lyrics to date, written by the Italian Harmonica Maestro. From the heartwarming ballad that is the album title-track, ("...Just call my name, I'll be there for you, just believe it... give me your dreams, together we can make them come true...) to the wonderfully dark and atmospheric song If These Wings (...there ain't no grave that can hold my body down... what do you think I see? I see a band of angels and they are coming after me...), among others, Poggi manages perfectly to translate, through his lyrics, hopes and fears of modern society, suggesting, at the same time, to use music as the most natural remedy to our fragility and insecurity as humans and as a blanket of comfort to our everyday's lives.

Each song off Poggi's new album is a journey on its own, as often happens with the Italian artist's musical vision. But this time around, with For You, Poggi also provides, together with  his incredibly soulful Harmonica sound, a proper and truly inspired kaleidoscope of sounds which have always the Blues, in its foundations but it delves often into different sonic shapes and forms every time, in a very dynamic and creative way.

Fabrizio Poggi, through this breathtaking record, has taken another brave and massive step forward in his already outstanding career, proving once again that, when it comes to bring the roots of traditional Blues into more contemporary and diverse sounds, almost nobody, in the music business, does it quiet like the Italian Harmonica Master does.