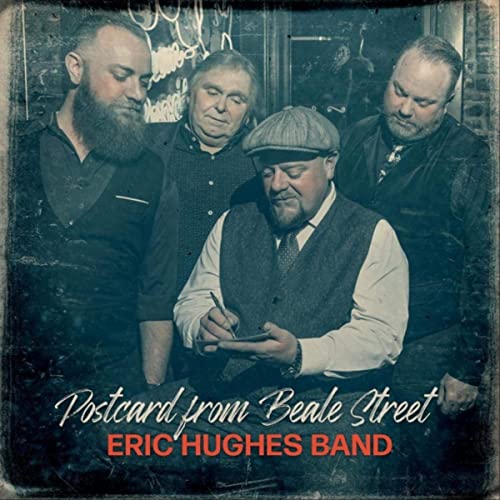 To many people, Memphis in Tennessee, together with being a wonderful city, it gets naturally associated, the majority of time, with music history and in particular, Blues. Which is quite right, but not entirely.

If it is true that you need to live in Memphis all your life to get to know, understand and appreciate the core of Memphis, of what really goes on in Beale Street, well, in that respect, very few can say that they really know and understand all about the relationship between music and Memphis more than the multi-instrumentalist and singer/songwriter Eric Hughes.

Through his brand new album released as Eric Hughes Band and called, emblematically, Postcard From Beale Street, the American artist and his band of brothers explore with great respect and profound knowledge the musical history and tradition of the city of Memphis, thanks to an irresistible combination of catchy tunes, inspired songwriting, elegant arrangements and overall superb musicianship.

Among the many secrets of an excellent record such as Postcard From Beale Street, one that stands out the most, it is certainly the way that the Eric Hughes Band was able to express the rich musical culture of a city like Memphis by writing a series of sublime songs containing elements of 1930's Jazz, R&B, Progressive and Southern Rock, Soul, Boogie and Hillibilly with the Blues, constantly, at the core of each individual song and their subsequent sonic development.

Whereas especially on tunes like Fair Weather Friends, Ain't Whipped Yet, He's Just An Alley Cat and the closing It's 4:20 Somewhere display a fabulous interplay of a band most certainly at the top of their game, it is important also to underline the amount of extraordinary craftmanship expressed by the band's front-man, Eric Hughes, on the band's new album.

Hughes' talent on Postcard From Beale Street is in full and breathtaking display, both as a singer and as a musician all the time, but to us, especially in poignant moments of the record like on the song Homesick Angel, dedicated to the artist's grandfather, where his vocal skills shine wonderfully, or on Blackberry Patch, where Hughes' many musical talents are showcased in all their beauty.

Postcard From Beale Street is one of those very rare records able to encapsulate in full, through the exceptional work done by the Eric Hughes Band, the past, present and future of a city like Memphis, to which music history owns a lot. Undoubtedly, one of the most exciting and inspired records of 2020, so far.