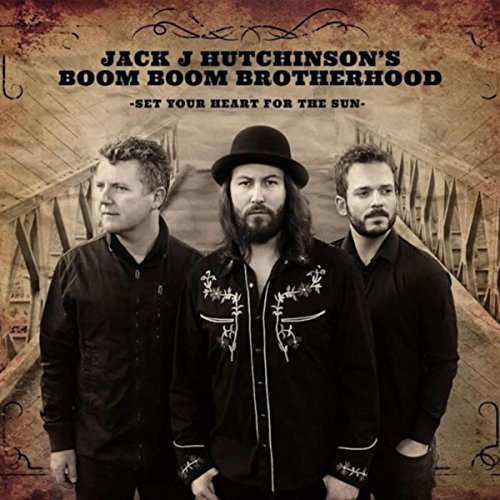 One of the secrets behind the success of a great album is the ability to keep the sound fresh and vibrant throughout the record, at the same time entertaining the listeners and jiggling different musical layers that magically fits inside one another, like a perfectly shaped sonic Matrioska.

This is something that the Leicester-born and London-based troubadour Jack J Hutchinson and his band of brothers Boom Boom Brotherhood fully manage to achieve in their debut album called Set Your Heart For The Sun.

Where many have described in the past Hutchinson as a pure Soul and Blues artist, this record demonstrates instead a different side of a musician, displaying a more broadened and eclectic background. Tinges of 70's Psychedelia and 90's Brit-pop and Rock emerge often in the rich musical offer of Hutchinson and his Brotherhood, bringing the whole sound of the collective to a new and very exciting level.

Set Your Heart For The Sun may travel sometimes at different gears but it never loses speed or pace in any moment on the record. Hutchinson is certainly an excellent guitarist but this album reveals him also as a clever songwriter and the songs on Set Your Heart For The Sun are a full proof of this. His vocal ability is impressive and has got many opportunities to shine throughout the album, either in songs with a more fast tempo like the opener Love Is Gonna Bring You Home, Fight Fire With Fire or the splendid, closing track of the record Wake Up or also in tunes carrying a softer, more ethereal tone, like Hey Hey Hey or The River Cries.

The Boom Boom Brotherhood bring to Hutchinson's songs a majestic wall of sound, with Rick Baxendale on Bass Guitar, Piano, Keyboards and Percussion and Jim Brazendale on Drums showing their musical abilities and talent especially in tunes like Fight Fire With Fire, Lone Dreamer/Hidden Dream and Jezebel, where their artistry reach the absolute peak.

Jack J Hutchinson's Boom Boom Brotherhood may have started, through this album, something that, in years to come, can get to a much bigger musical scale. The depth of quality present on Set Your Heart... shows the potential of a collective that, thanks to their original music combo, is certainly ready to climb the stairway for musical heaven.