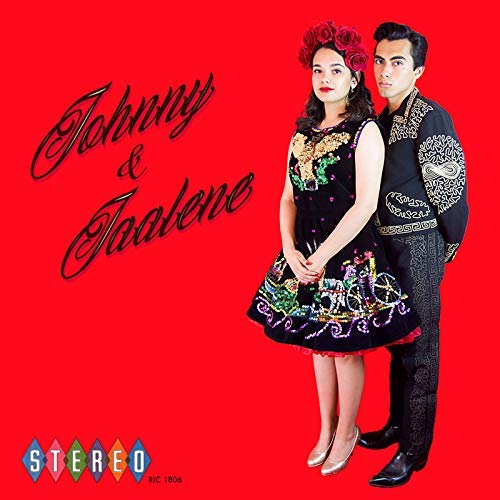 Chicano Music has gone through a lot of transformations and highs and lows, in the last half a century, sometimes in a good way, some other time not really up to the standards that the genre's Kingpin, Lalo Guerrero, reached in the late 40's.

It is therefore refreshing that a record that sticks to the traditions and the foundations of Chicano Music, with a little contemporary twist, like Johnny & Jaalene sees the light of the day right now, in 2018.

Together with the quality of the record in itself, one of the most astonishing aspects of the debut album of the Mexican/American band is the age range of the two bandleaders, Johnny Ramos (son of the excellent Blues guitarist Kid Ramos) and Jaalene DeLeon, respectively 19 and 16-years old.

The choice of the twelve songs that the band has decided to cover on their debut album is highly interesting. From Carla Thomas to The Danleers or from Eddie Cochran to Wanda Jackson, the way that Ramos and DeLeon manage to be respectful of the originals, although putting their own stamps on each song, is remarkably good.

Mexican sensation Johnny Ramos leaves most of the vocal duties, on Johnny & Jaalene, to his equally talented partner-in-crime but, when the time comes to take charge of the vocals, together with playing guitar side by side with his father Kid on this record, one can easily spot the inner rocker spirit inside the 19-years old Johnny.

A clear example is Eddie Cochran's Rockabilly version of Teenage Cutie, where Ramos is absolutely irresistible on vocals, showing that Rock'n'Roll swagger that separates the real rockers from the fake one. Another impressive job on vocals from Johnny Ramos can be also found on Lalo Guerrero's classic Los Chucos Suaves and on Bill Allen And The Back Beats classic Please Give Me Something, where, on the latter, Johnny's father Kid accompanies his son in a sumptuous guitar solo that finishes off the tune on a very high note.

Jaalene DeLeon is another true Enfant Prodige of the show business. With plenty of experience as leading role in musical theater, to step into genres like Americana, Boogie or Roots was the natural next step for the 16-years-old from East L.A.

At times, DeLeon's natural talent as a vocalist reaches peaks of great beauty, like on Angel Baby or the cover of Gee Whiz, where this talented singer stands up proudly, through this version, to the original from singer and songwriter Carla Thomas.

But the sparks of brilliancy present on the album tend to shine even more brightly when Ramos and DeLeon sing together, on few of the album's songs. Let It Be Me, a song mostly famous for The Everly Brothers version, is a ballad executed with extraordinary levels of vocal ability, where the voices of Ramos and DeLeon work together in magic harmony.

Another clear example of the vocal chemistry between Johnny Ramos and Jaalene DeLeon can be also found on the album closing track, One Summer Night. The song, a Doo-Wop tune originally by The Danleers, displays a fresh, contemporary and extraordinarily catchy rendition on vocals by the two young artists, on a fine tune completed by an excellent work on accordion by Jesus Cuevas, a musician of phenomenal quality.

Johnny & Jaalene is a record of great beauty, that looks to the past with respect and devotion on one side and to the future of the genre on the other, thanks to the great labour of musical love provided by two artists that, undoubtedly, have a luminous future in front of them.