Get this movie. I had to special order it and it took several weeks to arrive because the bookstore can't keep them in stock. This is not only a fantastic movie about the technique and inspiration of guitar musicianship, it is a three generation narrative about how to grasp your voice and blare it for the rest of the world to hear, even if they don't understand it yet.

Jimmy Page from Led Zeppelin produced this film. The Edge from U2 and Jack White from the White Stripes join Page in meeting together to "talk" about their personal experiences as they evolve to become the guitarists of their current bands and beyond. In the talking, there is ALOT of guitar playing, both past and present, along with versions of each others songs on stage. Each artist shares interview conversations, photos, vintage video footage of earlier works and secrets of their craft with the audience in the first person. They reveal how they think about music, about technology, about career choices, aging, and life. In speaking directly to the audience and each other in their own voices, it brings you in ... and who wouldn't want to be brought in to the mind of Jimmy Page, The Edge and Jack White. Get this movie. 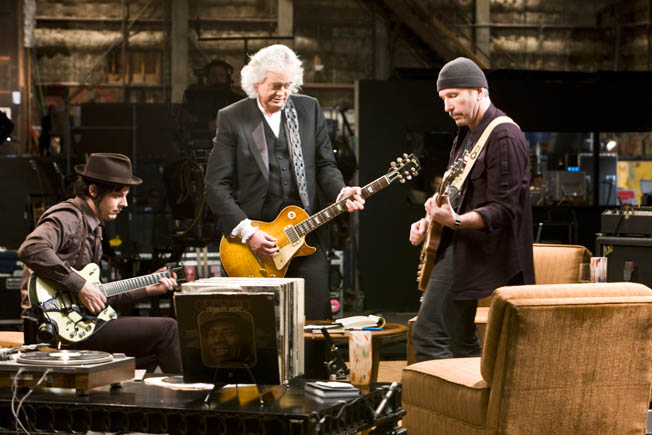 The film opens with Jack White, who among a family of ten kids, on a farm in Tennessee, is making a guitar out of a Coke bottle, wood and some string. It follows each musician from their origin to the stage. Jack comments that the three of them will get together and he's going to "trick" them into teaching him everything they know. 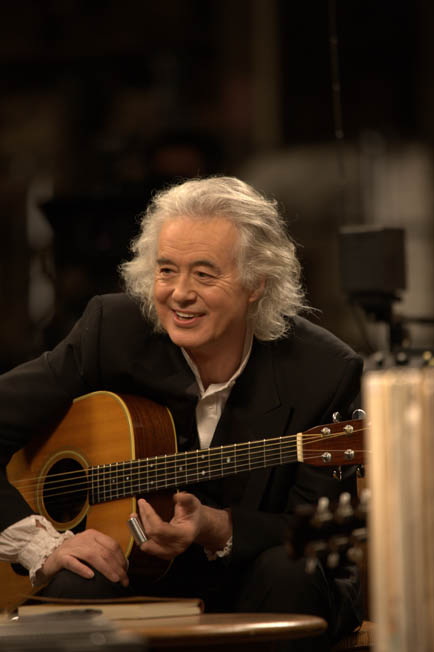 There is extensive footage of The Edge's experience in Dublin in the mid 70's during the terrorism strikes. What he has experienced has changed his perception and drive for survival and he expresses this through his music in a very humble way. The Edge sings "Sunday Bloody Sunday". James Patrick Page, the young handsome lad from Epsom, England, who is just yearning for any guitar mentorship that is not pop music, is ushered into his first experiences with the stage through "pre-rock" tunes played in community centers. He finds a guitar in a home that his family moves to and befriends it, bringing it to school. The teachers confiscate it during his studies and Pagey comments, "It wasn't hurting anyone ... not yet ... " If you only see the facial expressions on the faces of these artists as they talk about music, it is still moving. Combine this with carefully selected soundtracks, which are often performed together live, and the layers of its effect on the audience unfold.

The origins of rock, deep blues tracks, early recording sessions of all three artists are blended into this film to give even the casual rock fan a comprehensive education in music history. We see how each of their guitars is made, along with their firsts and favorites. The film ends with each musician reviewing their contribution to music and the influence of music to their lives. There's a hint of the beginnings of "Ten Years Gone". 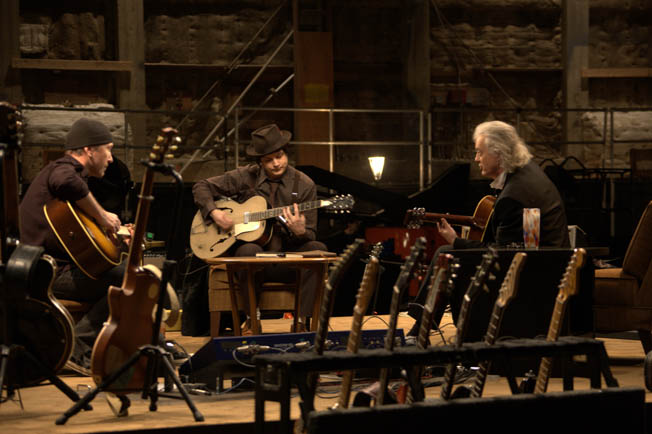 Did I say you should get this movie ?