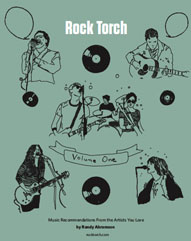 Music Recommendations From The Artists You Love

Rock Torch has been one of my favorite - and 'go to' music websites for years. I found it after Alex Chilton died. I was up all night, seeking anything I could find on the web to connect to other Big Star fans. I came across an article Randy Abramson posted with Paul Westerberg's commentary on Chilton. Perfect. Someone who 'gets it'. I was a follower.

As a music reviewer, I want a glimpse of the creative thought process of the artists when they wrote their music or chose a form to play it. It doesn't matter if I like a certain type of music. I review music I don't like all the time. What matters is that I 'get' what the artist is trying to express with their songwriting. What matters is the understanding of the context from where is originated. The history, the dialogue, the soul of the artist, I think, must be known, before a piece of music can be understood.

When Abramson publishes a new article on Rock Torch, I read it. I am afraid not to, because I might miss out on something that someone really cool in music has said - or is about to do. Rock Torch is not a 'music news' website. It's a music referral website. This is better than music news, to me, it's much more useful. I can find out which rocker is mad at which drummer, or got married, or involved in a scandal, or decided to become a politician, on many other AP pasting websites. Abramson has a Rock Torch 'filter' that selects musicians from such a wide variety of bands, that is it always current and has the 'news' that I'm curious about ... What's good in music. The rest is for the viral networks, they have their place, but I don't seek them out the way that I look for sites like Rock Torch.

Abramson has the website set up to accomplish one thing: To get the musicians to talk about which other artists they would recommend fans listen to. Then both the musician and the recommended band get featured on the site. Win-Win! Abramson pulls the musicians in as 'guest authors'. They talk to him in their own words as interviews or essays. So reading what they think about certain artists that inspire them is like hanging out at a cool party and just chatting about music. This lowers my geek meter just a few bars, at least temporarily. The great thing is that he does this same process again and again, and must have hundreds of entries by now from artists of various genres. Flipping through the web-pages of Rock Torch is always fun and a great adventure musically. So when Randy announced that he was taking the pages of his site and making it a book, I really looked forward to its release.

The paperback version of this book is well done. The publication of it is unlike something I've ever seen. Every article has its own page, and there are beautiful color paper stock pages between the artists' interviews. This creates 'space' between the readings, which is important for letting the artists' opinions be their own island. The illustrations are interesting and timeless. The colorful, real life drawings are accurate, yet casual and accessible. The pages aren't flashy gloss, which speaks to how understated this whole project is. The focus are truly the artists and the music they want to share.

You can flip through this book and quickly become addicted to scanning for an interesting pairing of author/artists each day. Or you can read it page by page, cover to cover and delve into a wealth of tunes. The great thing about having it all in a book, is that it is easier than managing the navigation of a website, plus, you have the reference when you are settling in to buy some music.

Some examples that are noteworthy for me are:

Marissa Nadler's recommendation of Patti Smith and Kate Bush. I've been a long time Kate Bush fan since her work with Peter Gabriel and follow her solo career as well. Kate's 'individuality' just glows from her performances, indeed.

Peter Phythian of the Guilded Palace of Sin's recommendation of Dr. John is just brilliantly written. Gris-Gris "flows like a spirit battle between the dark and the light. The first two tracks are pretty voodoo, then 'Mama Roux' seems like he's just woken from a bad dream and needs to forget what it was about before the dark magic takes over again. 'I Walk On Guilded Splinters' the last track is one of the best album closers ever, like he's accepted he is what he is...."

Craig Minowa of Cloud Cult's recommendation of Jurgen Knieper, John Barry and Peter Gabriel. He chose these songwriters because of their musical scores in movies. For Peter Gabriel's pick, he mentioned "The Last Temptation of Christ" soundtrack, "Passion." I'd go a step further and suggest the original artists on the album before it was produced, 'Passion Sources' (Real World Music). Peter Gabriel was always careful to bring as much credit to the individual artists from other countries as he teamed them up to work on the collaborative projects.

Kevin Bowe has become a household name in my circles and here on BBR because of his love and recordings with The Replacements. Bowe is also a master musician and song writer who has penned music for Etta James, among other famous recording artists. Rock Torch has him historically bound to their pages forever now.

And then there is Van Morrison, The Psychedelic Furs, Thin Lizzy and The Blind Boys of Mississippi, not to be confused with The Blind Boys of Alabama. The Stones, Lucinda Williams, American Music Club and Nico, all up for discussion. The list of recommendations from great bands goes on.

Once the book is in your home, it seems like it has been there all along. It belongs on a shelf that holds music. Be it your ipod/sound cloud player, CD rack or stereo record stacks, Rock Torch seems to be alongside the history of songwriting for the journeyman's ride.

Randy Abramson is a trusted name in music. I know this because before I stumbled across his website, I was in New York City and shopped at the House of Oldies for some vinyls. The shop is a cornerstone at the hub of understated clubs in the West Village. The store was floor to ceiling full of vinyls. No CD's, no cassette tapes, no fillers, just stacks and stacks of boxes - vinyls. The owner knew every record in this place and directed me to my searches without hesitation. Purchases as wide as The Ramones, Dean Martin, XTC and Jimmy Page/Outrider were filled without an eyebrow raised. What a happy day, mid-January, to spend a good part of the afternoon with my groovy music friend, hanging at the House of Oldies, browsing stacks, sitting on the floor and then fleeing with the sun on my face, holding my bag of (very reasonably priced) LP's. Years later, I was on the Rock Torch website and discovered The House of Oldies was on Randy's list of favorite websites. I wrote to him and asked him about this connection. "That's my Pop's shop!" he said.

The walls of a record store are talking, listen up!