"I Put a Spell on You": A Bucketbot is Born

Review and Photography by Rachel Lange.

I know the exact moment I crossed over and became a Bucketbot.  It was at Buckethead's September 10th show at Washington DC's 9:30 Club.  Halfway through his set, he shuffled over to my end of the stage, stood at its edge, his left hand fluttering along his guitar's fretboard like Anne Sullivan signing furious messages of guitar glory into the palms of Helen Keller, while he reached a ghoulish right hand out over the crowd.  The teenage boys surrounding me immediately leaned toward him like iron filings drawn to a giant magnet, but I stood momentarily hypnotized, my hands on my cheeks and a dopey grin on my face.  His eyes passed over me for a second and I spent the rest of the show wishing he would hypnotize me all the time.  I was in love with every second of his performance; I couldn't remember the last time I had so much fun at a show.  But it's worse than that: I was doomed.  Buckethead — the white mask-wearing, KFC bucket-sporting, toy-distributing, horror-film loving guitar god with the mad nunchacku and robot skills — gave life to a 37-year-old behemoth fan. 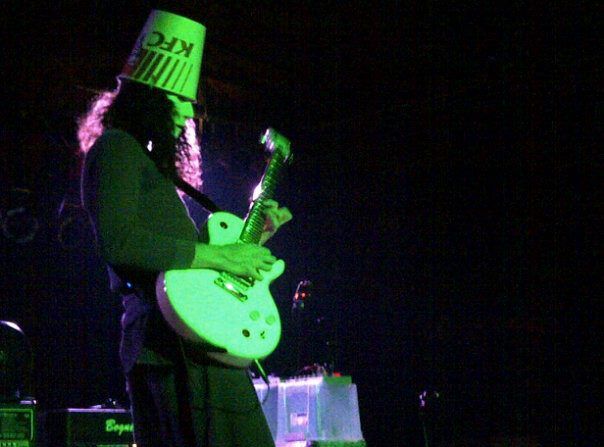 An already planned beach vacation in South Carolina coincided with several of Buckethead's dates in South Carolina and Georgia.  His performance in DC — the guitar wizardry, the humor and silly creepiness — left me in such a stupor that I sped to the show in Charleston, SC on September 15th and, in a final act of idol worshipping, indulgence, made last minute changes to my return flight to Washington so I could spend a night in Atlanta and see his performance at The Masquerade on the 17th.

I'm ashamed to admit that, up until recently, I've been living under a rock.  It was just a year ago that I first heard of Buckethead and it was only because I was perusing the Gibson website and came across the Buckethead Signature Les Paul guitar.  It's white and has red buttons and it sort of looks like a video game controller.  The webpage said something about Buckethead being fiery. I didn't think much of it at the time.

Fast forward to early this summer.  While browsing concert listings on the 9:30 Club website, I noticed Buckethead's date.  Curious, I read the short bio and decided to check out anything that might be on YouTube.  Who knows, he might be good, right?  Also, I wondered, should I be afraid of Buckethead?

Ninety seconds into an old performance of "Whitewash," my ticket was bought.  I proceeded to check out his website, Bucketheadland.com, where I spent a solid hour laughing my ass off.  It's constructed to be the website of Buckethead's demented imaginary amusement park and contains his biography, describing how he was raised by chickens, why he wears a mask and other fun stuff.  What is it with guitar players and personal mythology? I'm just happy Buckethead's legends involve chickens and not transactions with Satan.  Boring!  Bucketheadland is adorable and endearing and most importantly, a ton of fun.  I can't look at a Ferris wheel anymore without giggling.

So I had all miserable summer to get psyched about seeing him at the 9:30 Club.  In the meantime, I downloaded several new favorite tunes and spent hours watching YouTube videos.   My god, those hands!  That huge vein!  I thought Brian May had the best hands ever.  Boy was I wrong!

In concert, Big B, as the kids call him, sticks to the crowd pleasers from his massive catalog.  He's recorded like 80 billion albums as a solo performer and as a member of various bands, including a stint in Guns n Roses.  Buckethead's music ranges from experimental shredding to the emotional and beautiful.  It'll take the rest of the year for me to sift through it all.  This summer, the songs played have included his reliable "Night of the Slunk", "Gory Head Stump", "Buckethead's Toy Store", "Jordan" and "Revenge of the Double Man", along with (his old band) Praxis tunes "Meta-Matic" and "Crash Victim".  He's constructed a spine tingling, roaring, and exhilarating show from the first note to the way he abruptly leaves the stage, giving the audience a meek wave on the way out.

Initially I wondered if he would have a band on stage with him and, if not, would it result in a less than stellar show.  I had nothing to fear.  Unlike other highly skilled guitarists I can think of, Buckethead possesses not just outrageous musical ability, but the personality and charisma needed to completely inhabit a stage and completely arrest an audience; he accomplishes this without ever saying a word.  After seeing him three times in a week, I've decided that adding other humans to the stage would add nothing to the performance.  We need to be completely focused on watching his oversized alien tarantula hands while he busts out robot moves.

The only things that really bothered me were the blank looks I got from people when I told them I was going to see Buckethead, everyone from coworkers to the front desk clerk at my Atlanta hotel. I've already owned up to my own ignorance, but I thought it was just me.  I even got puzzled comments from Facebook friends ("Who is this whackjob?") and a pause from the Delta reservations agent when I told him I needed to spend the night in Atlanta so I could see Buckethead.  It is a lament shared even by the teenagers and early twenty-somethings that seem to dominate his audiences.  Despite being highly productive since the early 90's (his first album, Bucketheadland, was released in 1992), Buckethead remains largely an underground figure.  However, this status also results in crowds of friendly people excited to meet other fans.  At the Atlanta show, a sweet guy from Vidalia, GA commented to me that he texted his wife to tell her he was surrounded by other "believers".  We were all very happy.

After Buckethead left the stage in Washington, DC, three boys leaned in together for a group hug, one kid clutching the copy of Disney's "Darby O'Gill and the Little People" acquired in the mid-set toy giveaway.  They looked as if a life's dream had just been fulfilled.  I was just happy I'd finally crawled out from under that rock. 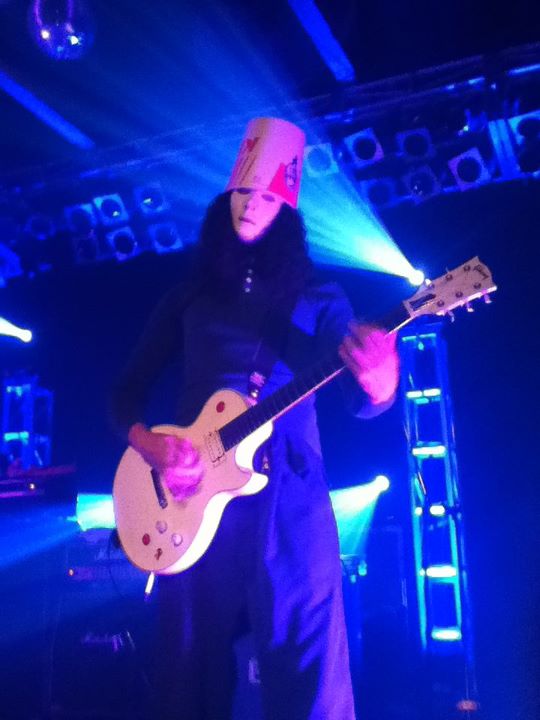