A little history lesson before I get started: the early 1980's brought with it the New Romantics. A backlash against 1970's punk, the movement celebrated glamour and fashion and its adherents – male and female –dressed androgynously. Boys wore makeup just like the girls did, as I remember from watching music videos from bands like Culture Club and Spandau Ballet. The hair on that guy from Flock of Seagulls will haunt me until I die. While the movement proved to be mostly just a passing trend in music and on the streets, it also left us with the one, the only, Duran Duran. An entire generation of women (and men) would be affected. Arguably the prettiest and most glamorous band from that time, they are also among the longest lived and best of that era.

I was about nine years old when Duran Duran was really hitting it big; I proceeded to perpetually swoon for the next several years. Seven and the Ragged Tiger was one of the very first cassettes I ever owned. I devoured Duran Duran's music and prayed that "The Reflex" (totally my favorite song in 1984) would show up on "Friday Night Videos" or "Rock on Chicago", the latter a vastly superior show in my preteen opinion. I loved Duran Duran but was careful to keep my feelings to myself, as I had a Baby Boomer stepdad who enjoyed ridiculing these New Romantic types. As it turns out, I was a kid with pretty decent musical tastes. It would take 28 years before I would finally see them in the flesh, when they blew through DAR Constitution Hall on October 16, touring to promote their album All You Need is Now. Showing up alone meant a second row seat, on John Taylor's side of the stage. Meow. My nearly three-decades-old dream was coming true. 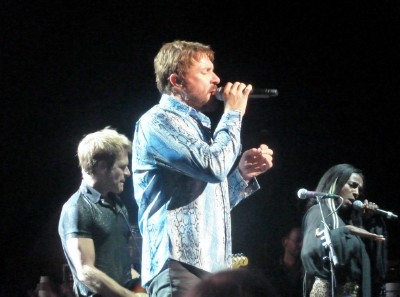 Far from being an 80's nostalgia act, Duran Duran demonstrated that the 21st century agrees with them. Indeed, only about half the set list consisted of songs from the early days, ones my preteen self would know. 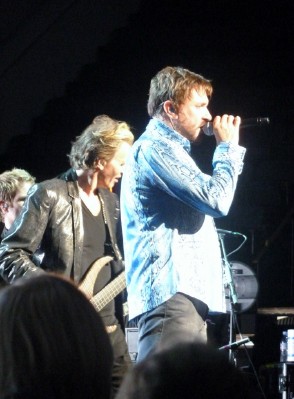 The new tunes all have the signature Duran sound — catchy and singable — staying faithful to the band's 1980's roots while signaling that they exist fully in the 21st century. In particular, the title track from All You Need is Now is pretty great. That said, they don't appear to try to distance themselves from their past work, knowing that we old fans want to hear honest renditions of "The Reflex" and "Rio" along with all the other early greats. I hadn't even thought about "The Reflex" in years, yet I still knew every word. So did everyone else.

Speaking of existing in 2011, the band have embraced social media. They have an extremely active facebook page; updates are posted from the road and fans are able to post notes and photos of their own. This is a group known as one of the first to really embrace the music video, so maybe it's not surprising that they've taken to this modern communication form. At the show in DC, John Taylor admitted to being addicted to Twitter and during the instrumental "Tiger Tiger" (which allowed saxophonist Simon Willescroft to have the stage to himself) fans wereencouraged to post tweets with the hashtag #Duranlive. The tweets then scrolled on a screen above the stage for everyone to howl at while the band took a breather (My favorite:"John, I forgive you for not writing back to me in 1986!"). The band's use of social media is fun and makes fans feel more like participants rather than just spectators. These guys really are cool. 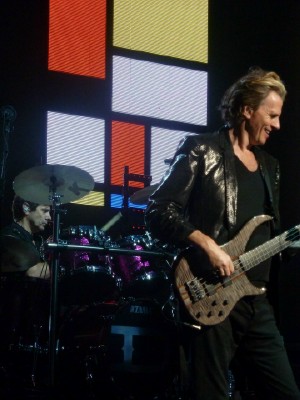 At the risk of sounding like another still-smitten fan, it really should be pointed out that time has been good to these men. Simon LeBon, despite apparently blowing out his voice earlier this summer, sounded amazing. Nick Rhodes is as artsy and glam as ever and Roger and John Taylor both look like they probably have portraits rotting away in attics somewhere. Seriously, am I just now noticing how hot Roger Taylor is?

Some new faces are on stage for this tour. The vaguely Prince Harry-looking Dominic Brown replaces original member (and vaguely Link Wray-looking) Andy Taylor on guitar. Brown, who co-wrote All You Need is Now, really is a fantastic guitar player and blends in nicely with the rest of the band. Anna Ross joins Simon Le Bon on vocals for such songs as "Come Undone". At the DC show, however, my most enthusiastic applause was saved for percussionist Chastity Ashley, who reminded me of a modern day Sheila E (again bringing the past into the present!) and provided extra oomph to Roger Taylor's drums. I'll be honest: Ms. Ashley was so good I started swearing. My rough string of expletives loosely translated to "Goodness gracious, where did they find this lovely and talented lady? She is so good!" I hope we see her again.

After whipping us all into a frenzy and showing us an amazing time, Duran Duran finally left the stage, but not before John Taylor said, "We'll keep coming back if you do."

God bless these guys, they post set lists on their facebook page so we don't have to take notes! See, look!