In what is obviously an attempt by the music industry to bankrupt and frustrate me, October and November 2011 will go down as two months overwhelmingly chock full of concerts.   In October alone, I counted no less than 10 shows I was interested in, including one doozy of a weekend (October 14-17): Buckethead’s last tour date on Friday in New Orleans; 80’s guitar virtuoso Yngwie Malmsteen in Silver Spring, MD on Saturday; Duran Duran and Dream Theater in DC on Sunday and Monday, respectively.  The prospect of such a weekend was daunting.  Ticket prices aside, I had a Saturday afternoon guitar lesson I didn’t want to cancel, and there was the major detail of Buckethead performing almost 1,000 miles away from home.

So I did what any borderline insane music fan would do: I triple dog dared myself to do it all.  To get to New Orleans on Friday, turn around and arrive home in time for my guitar lesson on Saturday afternoon and see Yngwie Malmsteen Saturday night, and finally see Duran Duran and Dream Theater.  The triple dog dare meant I had to do it.  I had no choice.  First item on the agenda: Buckethead at House of Blues, New Orleans.

My appreciation of Buckethead is becoming well-documented.  I don’t care, I’ll own it: this dude is an amazing guitar player and one strange cat.  I absolutely love it all. I’d seem him three times already this summer, heck, all in one week, but the more shows the better.  I found the prospect of seeing him in New Orleans, a city I adore, just too alluring to resist, plus it’d be my last chance to see him until who knows when.

Many frequent flier miles and a cheap hotel reservation later, I arrived in NOLA, completely stoked to have 16 hours to enjoy myself. I spent the day wandering around the French Quarter, eating, people watching and taking pictures.  I had to tear myself away from Preservation Hall in order to get to House of Blues in time to secure a spot near the stage.  In a display of Southern hospitality, a man leaning against the stage allowed me to have his space so I could be in front of all the action.  I had the best time.

This would be a good place to mention Lynx, Buckethead’s opening act for the last month or so of his tour.  Lynx is a solo performer, a 25-year-old multi-instrumentalist from California.  Her music is of the indie-folky type that I don’t normally go for, but I have to say this young woman is quite good.  She has a strong voice and her songs have thought-provoking lyrics; in particular, I became fond of “Youngblood” and “Tricksters and Fools”.  I’ve been humming the latter to myself for weeks. Lynx is genuinely talented and I wish her much success.

As usual, Buckethead was a one-man carnival, hitting us all with lightening bolts of awesome.  My favorite tunes emerging from his shows include “Help! Help! Help!/The Embalmer” (which aren’t even on any albums, from what I understand, he just trots them out for concerts), “Buckethead’s Toystore” (even my Mom likes that one) and “Revenge of the Double Man”.  One thing I’ve noticed about his music is that, in addition to rocking hard, it’s often quite funny.  I love Led Zeppelin more than most things in this world, but Led Zeppelin isn’t funny at all.  “Gory Head Stump” (a Big B personal favorite of mine) is a riot, sounding like it came from the soundtrack of a campy horror film (“Want Some Slaw” is another hoot, but wasn’t included in the set). In concert, “Gory Head Stump” can be accompanied by any of the following: Buckethead’s robot moves, him staggering around the stage like Frankenstein or, my favorite, playing with one hand while the other swings around a toy chainsaw, like Leatherface.  I never get tired of seeing this. 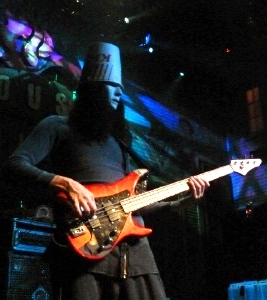 Do you know of anyone else who gives out toys at concerts?  I don’t. Actually, the toy exchange is an important part of a Buckethead show. In the middle of his set, Buckethead puts his guitar down, does an impressive nunchuck demonstration, followed by a robot dance, all to the howling approval of the audience.  It’s hilarious, and good!  This all leads up to the toy giveaway, where a bag of toys materializes and Big B hands the goodies out to the crowd in front.  Many fans bring gifts to give in return; the gifts I saw people bring over my four shows included: severed limbs (fake, of course), drawings, Star Wars light sabers, and even a three-foot high suit of armor presented by a gentleman I’ll call “15 Show Joe”, a retiree who followed Buckethead around for the last 15 dates of his tour.  Determined to be an appreciative audience member, I brought a Michael Myers plush toy as my gift, which came complete with a tiny bloody knife.  The 20-something year old dudes around me were certain I made a good choice.  I got lucky that night in the French Quarter: Buckethead gave me a really cute doll and I gave him Michael Myers in return.  He nodded to me in thanks; like an idiot, all I could do was look up at him and smile.  I never said thank you!  But, I can die a happy woman now, since Buckethead acknowledged my existence.  My gift was gently placed on an amp and the show went on.

It’s clear that, as guitar gods go, Buckethead is atypical. Furthermore, being a fan is in many ways an exercise in acceptance – for example, his appearance is probably a turn off for many, the dude never talks (his tunes are instrumentals), and he doesn’t do encores. But for me that’s part of the appeal – it’s refreshing to see someone who is outrageously talented be fun and different, to not act like every other cocky virtuoso out there.  For Buckethead, the result is a fan base that seems to love him unconditionally.  I’ve never seen fans so honestly love a musician.  The only thing I’ve witnessed that comes close to it is the Duran Duran slobberfest. Bottom line: Buckethead in New Orleans was a win, and I even managed to get home in time for my guitar lesson!