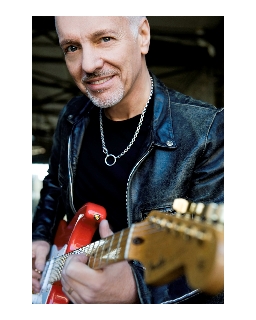 The album is historic.

"Frampton Comes Alive!" was released in 1976 on A&M. According to ALLMUSIC.COM :

At the time of its release, Frampton Comes Alive! was an anomaly, a multi-million-selling (mid-priced) double LP by an artist who had previously never burned up the charts with his long-players in any spectacular way. The biggest-selling live album of all time, it made Peter Frampton a household word and generated a monster hit single in "Show Me the Way."

While other bands lose their credibility without a studio behind them, Peter Frampton became famous because of his stellar, passionate and technically mastered live performances. Many tracks, such as "Show Me the Way," "Do You Feel Like I Do," "Something's Happening," and "Shine On," were hailed as more confident, power packed and well - just better, live.

During the show, Peter told the story of when the studio recording of "Do You Feel Like I Do," came out. It 'did nothing,' he said, "and the release was very disappointing." For the album, "Frampton Comes Alive!" they added the track again. "Release the same song again ?" Peter asked his producer. "Yes, the producer said." He told us. The crowd roared with screams of surprise and approval. The Frampton team took a chance back then to re-release this song and decades later, reflecting on its enormous success, this piece of history is stunning.

At its 35 year anniversary, with the same passion and connectivity to his music, Peter Frampton put together a band to present these classic songs live once more. The Frampton Comes Alive tour is a series that started last year. After 100 shows, this tour is an add on, simply because Peter Frampton loved playing so much. This bond with the live crowd is mutual. Fans in the front rows had their "Frampton Comes Alive!" record albums proudly held up to their idol. It was moving to share this experience with them.

Why not see the original perform his legendary works? What are you waiting for, a tribute band to come to your town ?

Peter Frampton is (hysterically) funny, warm and engaged with the crowd.

"Hello Worcester, How Are You ?"

Frampton has a wit that is fast and furious, gaining heat as the night went on.

With a packed house in Worcester, Massachusetts, just within an hour of Boston and the night before the New England Patriots were headed to the Super Bowl, Frampton boldy said:

"I heard you had a football thing going on ?" "I am British!" "I don't know anything about that!"

At one point, during the show, Frampton took off his jacket and said, "That's all I'm taking off!"

Halfway through the set he announced, "Now we're officially on side 2"  This had what he called a 'bonus acoustic'. He played a great piece and then asked, "Any guitarists in the house? Explain this to other people: Tunings!"

During "All I Wanna Be" he joked as he was singing about how he doesn't care if "I've lost some hair" !

Everyone was clapping and cheering. Frampton could do stand up comedy and we would have enjoyed the ticket.

In addition to the entire set of "Frampton Comes Alive!" Peter also played a few songs from other albums. One of them from the album "Thank You, Mr. Churchill." In this recording, he was paired with Grammy-winning songwriter Gordon Kennedy. One of the most memorable moments of the night was the song "Vaudeville Nanna and the Banjolele." "It’s the story of how my grandmother gave me a banjolele when I was very young which started my entire musical journey." (press bio). "This one is how I started playing guitar, the family support and history of how it all started." (live quote) . There were family photos across the back screen and this song was as sincere as a cherished memory can get. This was a personal connection to the crowd, a legendary moment.

During "Lines On My Face," Frampton pointed out, 'You are my family and friends"

The band is talented in broad areas of music.

Get ready for a three hour set. The band supporting Frampton was fantastic. They were bass solos, funk rhythms, and great piano/keyboard sequences. Throughout the night, tearing solos lead to standing ovations, yet Peter and the band were humble.

Many of the songs got standing ovations, or the audience was on their feet for most of the song. When "Baby I Love Your Way," started, the crowd was up and swaying. My favorite song played tonight was "I Want To Go To The Sun." It had an amazing solo and reminded us of "When the Levee Breaks" by Zeppelin. "I Give You Money" had a green patterned screen behind it which was fitting for the song. The duo of guitarist and Frampton lead to more ovations. With beautiful sky scapes across a video backdrop, a funky vibe started playing with the incredibly talented band swifting into a jazz and soulful production.

Even the engineers at the back of the house were great. They were attentive to the crowd. During one of Peter's guitar solos, the crowd yelled, "turn it up" and the sound engineers accommodated them. Colored background light circles that looked like retro speakers gave a classic feel to "Shine On". The lighting engineer had a different sequence to present with every song, with the timing just right.

The band also provided back up vocals. Peter announced the guitarist, Adam Lester as "a man who needs no introduction!" Don Wojciechowski on 'engine grind' drums was introduced and he was great. This band could play anything and they did. Riffs of the Rolling Stones, that the band made their own, jammed into "Jumpin Jack Flash."

Soundgarden's "Black Old Sun" was another highlight of the show. Frampton had one of the widest smiles I've seen in a rock star in a long time. I didn't catch it for long, though, because another standing ovation crowded my view, but I was happy for this legendary moment, yet again.

It was really moving to see photos that fans sent in of themselves holding their copy of the "Frampton Comes Alive" album posted above the stage. I read in his press bio that Peter Frampton runs his own Facebook page and actually answers questions from fans. I believe it after seeing his connection to this crowd tonight.

"DO-YOU-FEEL-LIKE-I-DO ?" projected onto the screen. Everyone was on their feet. This was THE moment where you were so glad you bought that ticket, because we knew what was coming next.

With everyone cheering and waving, he started his signature 'guitar talk' through his talk box device. There was a white line projected above the stage on a screen and it bounced much like a heart monitor wave does. Every time he made a guitar talk sound, this line would wave and quiver, then go back to flat-line. It was very cool to watch and enhanced this spectacular sound effect. He quoted the song lyrics, but also veered to the welcoming, "Do you hear me ? Do you like what I'm saying?"

The show was closed with The Beatles, "While My Guitar Gently Weeps."

It is a commitment for Frampton, the band, the staff and the fans, to come together and pull off such an event. The theatre was packed and ticketing was either sold out or really tight. The staff kept fans in their areas as to not disrupt the intricate productions during the songs. A three hour set with no intermission is a long time to play and equally long for the audience to remain engaged. There were diverse representations of all ages at this show. The presence of this dedicated band with Peter Frampton's energetic-rock luster-creativity still shining, impacted this crowd and will offer great stories of this performance for decades to come.

To read the amazing story of the discovery of Peter Frampton's lost 1954 Gibson Les Paul guitar which was pivotal to the making of the FCA album and so much music of the 1970's, click here.

Show Me The Way

It's A Plain Shame

All I Want To Be (Is By Your Side)

Baby I Love Your Way

I Wanna Go To The Sun

Penny For Your Thoughts

(I'll Give You) Money

Lines On My Face

Thank You, to the lighting engineer for Mr. Frampton, the press team, and The Hanover Theatre.

~ And many thanks to Carol Devine and my new friend, Vivian.

Join us on FACEBOOK! for site updates of reviews, articles, and daily song posts.

From the Press Team:

Peter Frampton studied at the Bromley Technical School with classmate David Bowie (with whom he later recorded and toured). At 16, he was lead singer and guitarist for British teen band, the Herd. At 18, he co-founded one of the first super groups, seminal rock act Humble Pie. His fifth solo album, the electrifying "Frampton Comes Alive!," is one of the top selling live records of all time. Frampton is so identified as the quintessential rocker, that he served as a consultant on Cameron Crowe’s Almost Famous, Crowe’s semi-autobiographical film about a teenage journalist covering the fictional rock band Stillwater.