From their bio: After the six piece played their first show together in 2010, they decided to put together an eight-song demo. That recording caught the attention of friends Matt & Brad Shultz of Cage the Elephant, and their producer Jay Joyce (Emmylou Harris, The Whigs), who’d go on to produce Sleeper Agent in July 2010 in his Nashville studio. While laying down the tracks for Celabrasion the group teamed up with the Shultz’s and Ryan Zumwalt’s Death Panda imprint leading to a deal with Mom + Pop. All of the above happened in just NINE months.

This young six piece group out of Bowling Green, Kentucky, is tearing through the usual channels of music production and blazing trails of their own. The best thing about this is that they seem oblivious to what's happening in their growing popularity. They are simply having a great time jamming. What they are doing, in actuality, is pulling from all styles of quality music, both classic and edgy, and creating new sounds that forge ahead the melodic hope of fun, rockin, yet intelligent songwriting. They have the talent to back up their efforts.

The vocal duo of Alex Kandel and Tony Smith bring chemistry to the recordings and the stage. It doesn't stop there. Their live show is magnificent mayhem. With keyboardist Scott Gardner exiting his station and rolling on the floor while still playing, drummer Justin Wilson cross sticking amongst a blur of flying hair, and Josh Martin with Lee Williams jumping and jousting across the stage, this band can collapse into a zonal vortex of loud hard core edge. They are constantly in motion, play with passion and intensity and every band member sings backup to almost every song. The energy of this band does not stop. 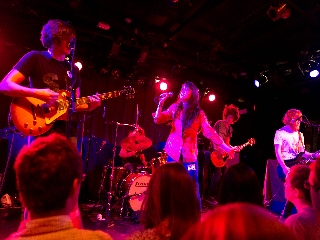 Tony Smith- Vocals, Guitar, citing influences by The Beatles, T-Rex and the late Jay Reatard, writes all the music and lyrics. 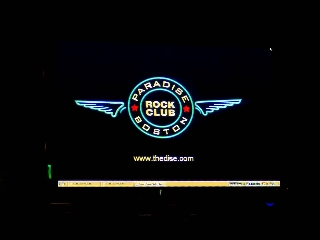 After a great performance from The Dig, the Sleeper Agent set at "The Dise," started with the opening tap of the notes of "Love Blood." Given their age, how did they write the throwback lyrics of this monotone mocking song? They actually reference the Tootsie Roll Pop commercial of the 1980's.  "Three licks on a swinging vine, you popped your Tootsie roll." What would Mr. Owl say? "Force A Smile" got rapid fire drumming out of Wilson, with Alex jumping in her knee high red almost patent leather sneakers.

"What's up everybody?" A fan from the audience announced them tonight, "Hey, Sleeper Agent!" Alex was moved by this and pointed him out, "Nobody's ever done that!"

I've seen Sleeper Agent members fall off the stage in excitement in video footage, but to be there live when Scott Gardner pulled the keyboard over the back of his neck while he was still playing made me understand why this happens! "Bottomed Out" has a technical keyboard piece and Gardner seemed to handle it in mid-air. 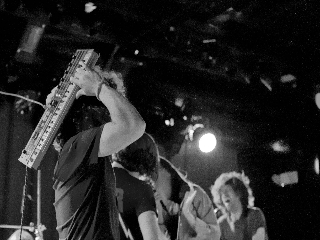 Proud to be from Kentucky, they paid tribute to their home state, but seemed excited to be visiting us here in the Northeast. The band was announced and Alex and Tony shared their latest adventure last night on the Jimmy Fallon show. They thanked their touring band mates, The Dig and Ben Kweller with whom they will be traveling for about 30 more shows.

A fan yelled out, "Time for a Celabrasion!" This woman told me after the show that she traveled from Pittsfield, MA to Boston, just to see Sleeper Agent. She heard of them on Vermont alternative radio and had missed their free show, so was waiting for a drivable date to catch them live. "I MUST SEE SLEEPER AGENT!" We talked about how this band has old school rock talent, yet is energetic, fun and smart in their music productions. She said, "This is how music should be today and this is the music that should be on the radio." 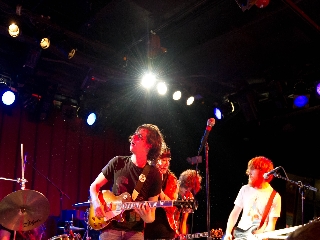 The rhythms and drumwork in this band really rock. Wilson skips and keeps time with Williams' bass lines in "Shuga Cane." Every song on Celabrasion has you moving in some way you didn't expect. Alex and Tony don't hold back their intensity. This band ignites each other and the crowd. 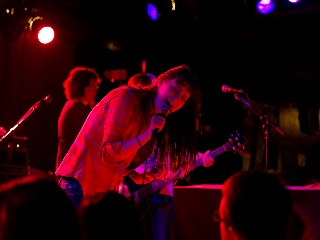 The first track I heard from Sleeper Agent was "Get It Daddy" and I immediately thought of Joan Jett and Pat Benatar. We need women in rock that beat down the door for genuine music. Women who get out there to belt it all out with their talent and don't worry about fitting any stereotype. Alex seems to approach every track with a straightforward give it all you've got attitude and with this band behind her, the power that ensues explodes. This track live was an awesome spectacle of mid-song-bridge head banging with all the members trashing the structure of their spaces, while tearing up the airwaves with pointed rock anthems.

"Some White Blinds" had an intense Marilyn Manson inspired vocal that ripped through this swelling crowd. After this dive into the deep, Tony said to Alex, "You're sweating!" Alex mumbles, 'Yeah, I didn't shower today, so I don't want to take this (shirt) off." Tony drinks and spits water at her. "There, now you've showered!" Alex, "Dude, that was gross!" 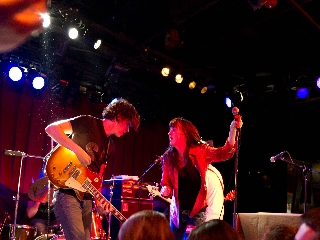 The Alex and Tony duo work with great chemistry on stage. They connect and repel simultaneously like opposite magnets, yet the warmth is always there. It's the space between that keeps the music interesting and something everyone can relate to.

"That's My Baby." I didn't expect this on the album and was happy to hear it live. Hands down, this and "Be My Monster" are my favorite songs from Sleeper Agent, although I love the entire record. "That's My Baby," is the warm side of this band that shows the talent here runs deep. The harmonies and complimentary support that Alex and Tony offer each other create a timeless hit. The song is melodic, catchy, the lyrics portray closeness, but with acceptance of distance. It's complicated! Isn't it always?

Smiles from the band blazed throughout the night. "I'm a gonna let go, I'm a gonna waste some time." They were in the zone and born to do this work. "Get Burned" was the track they televised on Fallon and they played it again tonight. Here's their video with some commentary from Alex and Tony.

"When you come down I'll be there, when I come down we'll play fair!"

Alex and Tony thanked the crowd and said they had two more songs for us. "Far and Wide" and then the centerpiece fan favorite, "Be My Monster." Mid-song during Monster, there is a calypso bridge that, with the flick of Alex's finger toward the audience, called us all up into a voo-doo trance-like state. It was like a New Orleans band jam. The track and set closed with a straight rock chord series that could've started an entirely new song. Here is the song from the SleeperAgentMusic Youtube Channel: 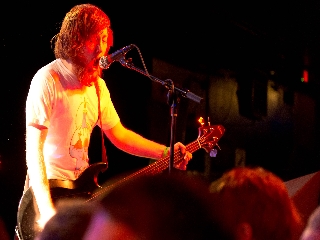 The band got their name from science fiction plots. "A sleeper agent is a spy who is placed in a target country or organization, not to undertake an immediate mission, but rather to act as a potential asset if activated." Sleeper Agent has been not so quietly infiltrating the music community and they are just getting started. Think of the possibilities! 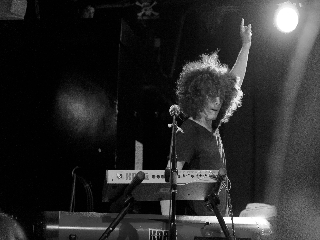 Bluebirdreviews is on FACEBOOK. For daily song posts and site updates join our page here.