Shokazoba and Superswank at the Elevens, June 11th, 2010, Northampton, MA.

Shokazoba is a ten piece Afrobeat ensemble that blends jazz and old school funk, with a West African beat that sets the foundation for a great community vibe. Their website describes their roots from Afrobeat pioneer Fela Kuti and our favorite Godfather of funk, James Brown. They have won several regional music awards and one visit to their show last night demonstrated that these were well deserved.

This ensemble was among the hardest working bands I've seen in a long time. 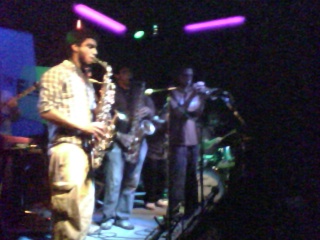 The instrumentals and musical solos were creative, intense and non-stop. Their teamwork both with each other and with the crowd intensified the experience with its impeccable timing. They elevated with multiple blending, streaming sounds and then could stop on a dime for punch and simultaneously start again to re-engage. Chemical Abuse was played early in the set with head on amazing wind instruments. The sax player was shared between Superswank and Shokazoba with increasing stamina as the night roared on. Kwame commanded the stage with a single note, "HA !" which gaslighted the crowd into its groovy trance. Their original tracks sounded somehow familiar, because they were so well done and rooted in several core genres, yet mixed in such a creative way, that the sound and tempo was fresh. "You guys like reggae?" shouted Kwame, announcing, "An original-by Shokazoba!" and he ducked back into his zone with the band for another dose of hypnotic energy for the crowd. I love that the trumpet player rocked out in his bare feet. "You're never ever gonna give up" commands Keith, singing from his drums. "Who's reality- no one knows?" sounded like a bit of old school rap with a reggae/funk influence. It was our reality, one infectious groove.  The musicians cued each other to keep the factors balanced among the amazing instrumental solos. These were songs of pride. They created a shared energy with each other and the crowd. As the evening went on, the audience became more cohesive and went deeper and deeper into a trancelike state. Even those who weren't dancing, were part of the collective Shokazoba unconscious.

This magnificent band includes Brooks Milgate Organ/Rhodes/Piano,  Pete Aleksi Guitar, and Aaron Martin Drums. Eddie Linehan was a visiting sax player but he sounded like he'd been with the band for years.

"SuperSwank is the collaboration of three talented musicians who share the same love of 60's/70's era organ jazz-funk. Although SuperSwank was based on a foundation of boogaloo-soul-jazz, the trio does not pigeonhole themselves to this genre. For your genre hopping pleasure, they incorporate many other influences they each share to reflect in their songwriting and performances. But the goal is simple people, make it funky!"

Sophistocated jazz, funk and I think a little rock guitar had someone yelling from the bar, "You guys rock !" Something about the guitarist reminded me of Jeff Beck.

These bands play throughout the Pioneer Valley and in festivals and surrounding states. Their energy is infectious, messages expressive of strength and resilience and the talent is brilliant. The Elevens charged only 8 bucks for cover on this amazing night. I would have paid a lot more and still felt like it was an honor to be there.