Photos of Mr. Buckingham are from the Hampton Beach Casino Ballroom, Hampton, NH

The big machine vs. little machine: It is all about balance, choices and the Seeds We Sow.

A sparse stage, with only a red Asian carpet, speakers and stacks, marked the setting that tonight unleashed the understated power that is Lindsey Buckingham. He changed guitars before every song in this completely solo set.

From Under the Skin, "Castaway Dreams," revealed what Buckingham has been thinking for quite some time now. Life is about balance, letting go of stark expectations to find the true dream which is freedom. The song has a foundation of Lindsey's gentle acoustic measures, but his voice ebbs and flows to deliver his message. With incredible vocal control over every note, whispered intentions and handsome growls, Mr.Buckingham cast his dream to this audience tonight. 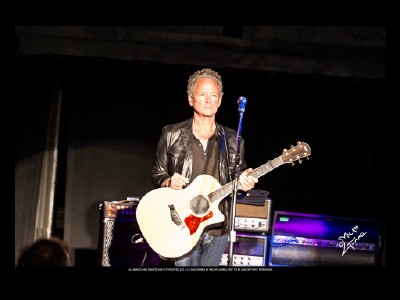 "Bleed To Love Her," filled the room immediately. Written by Buckingham, it became an addition to the Fleetwood Mac catalog, as it makes an appearance on The Dance. Buckingham gave it his all with echo intensity. At the end, he slowed it down, moved from side to side, then brought it back to full force, all the while, executing his legendary picking abilities that has made him so well respected as a guitarist.

"Thank you very much, it is nice to be back here."

"I've been finding a balance between the big machine and the small machine."

"And the relationship to each other and how the two could not exist without each other."

"It's the small things, the intimate settings, that allow you to continue to take risks, as an artist."

"I used to tour with a ten piece band, tonight it seems to be me. Like the person in the front row said, the small machine seems to keep getting smaller." 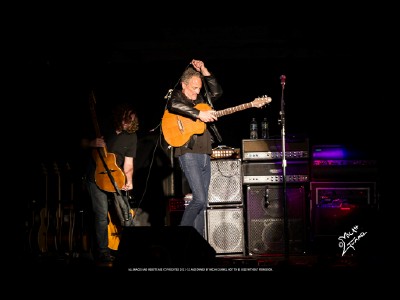 "Not Too Late," continued this conversation and pointed again to the heart of the message he was communicating tonight. This song, from Under The Skin, seemed to come from the deepest personal experience of Buckingham. He was not telling us what to do or how to think, but sharing his own raw emotions about life in the creative world.

"Read the paper, saw the review, said I was a visionary, but nobody knew ... like I'm living someone else's dream ...so it's been a problem feeling unheard ... so called visions always deferred ..."

One of the things that struck me while watching Lindsey Buckingham play solo live, was that his total craft of the vocals created new songs within themselves. He created fade outs with his voice, sputtered grunts and groans at the guttural level and extended or clipped notes to make each song unique from the recording and more interesting to hear and watch. The acoustics at the Calvin Theatre were impeccable, and I think this was important for such an intimate show. Every note needed to be heard to understand the intent of the songs he was building for the audience tonight.

And then there is Lindsey Buckingham's guitar performance. He can produce a solo with power and might, and march it out with clarity. I have come across many different musicians from various bands within a wide range of genres, rock, metal, and blues, etc. So many tell me what they know about Lindsey Buckingham is that he is a great guitarist who doesn't get enough credit for his unique style and what they appreciate about him is his mastery of acoustic guitar picking. I've seen countless videos of this, but to watch is live is truly remarkable. 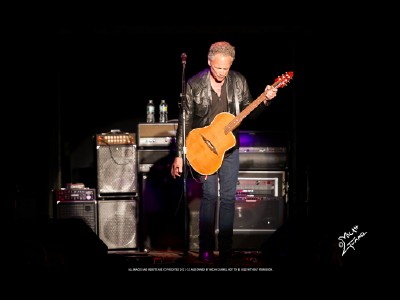 An example is the instrumental song, "Stephanie," from Buckingham Nicks (1973), which he played tonight. He hits a high key, pulls back his hand, drops it, starts again and then acoustic rhythms and melodies come together with a swift hand slide, How does he do this? And all with a nod and quick smile, maybe even a laugh toward the crowd. When they applaud, he seems genuinely surprised and moved by their response. The whole experience is new for him and for the audience. This is more than passion, it's mindfulness. 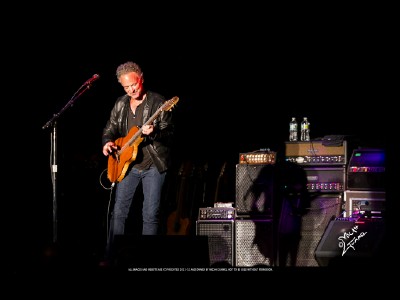 Lindsey Buckingham presents as an elegant man, always has been in my view. And tonight he was out on an adventure with his music. From the pensive, thoughtful, soulful ballads, also came a voiced that rocked and still had great range. During "Come," one good thing lead to another and we saw Lindsey jumping and stomping along the front of the stage with his guitar in hand. He'd step away from the microphone, leaning and jamming, then regain composure. The fans stood in ovation. He's a great showman. 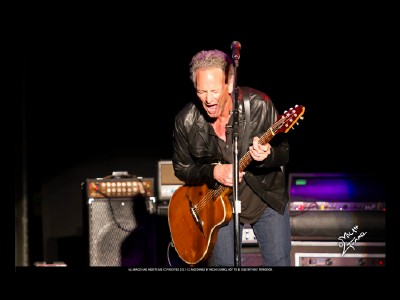 "Shut Us Down," from Under The Skin, had him belting out, 'as long as I can,' playing with one hand, then bringing the song down toward the end to a self-imposed fade out, genius reflecting the sentiment. To extrapolate a bit, the music industry life may need to be balanced and reworked, but Lindsey Buckingham is committed to staying around as long as he can.

Buckingham's second album, Go Insane, (1984) has a same titled track, "Go Insane." Tonight, in this small theatre, the raw acoustic arrangement brought the lyrics to the forefront with the painful confusion of the theme highlighted by the steady guitar solos with determined bridges. As the song rose in intensity, so did the audience's attention. Lindsey's emphatic foot stomping, screaming the vocals, 'She's a lot like you!" and hitting the newly created notes, invited a standing ovation. Buckingham nodded generously.

A slow, sweet introduction to Fleetwood Mac's, "Never Going Back Again," had the audience just so happy to tap along with this classic tune. But when Lindsey came to, "you don't know what it means to me ..."  a hush in his tone made the crowd turn instantly silent. In a breath-y, then breathless vocal, he sang at almost a whisper, "so some on down and see me .... again ..." It was so moving, the crowd was stunned, as was I. Then he rose brought the melodies back, while everyone cheered along. Incredible!

"You guys are great!" he said.

Lindsey Buckingham: "This next song is significant to me for a couple of reasons. It began as an ensemble piece and made its way to a solo piece." Buckingham talked about how he 'keeps moving forward' and 'keeps the core toward what's essential." He explained the 1987 lyric "defined who I was ...not looking FOR love, but defending AGAINST love." He paused and said "those were challenging times, but currently now it's about meditation on the power and importance of change."

"Big Love," had sharp leverage that flattened the crowds' restlessness and commanded attention. By the end of the number, he was so entrenched into the energy of it, that he bent upside down. He just seemed delighted to be out and sharing his experiences with all of us tonight.

"I'm So Afraid" had him leaning back and forth, with the bridge, demonstrating the song, swinging up and down and settled into an electric sound-scape smoking with distortion and ending with another standing ovation from the audience.

Lindsey Buckingham is going his own way with all the music and experience he has built for decades, yet not losing the roots of his resources. All of these songs that have been part of Lindsey Buckingham's life for such a long time, yet were being re-worked to what they mean to him now, came through to the fans in such a direct way that each song built on itself and the entire set had a consistent theme.The song "Go Your Own Way," has integrated the multiple identities that have evolved over the years. His music is distilled and expanded at the same time.

"Thank you for coming out tonight!"

Lindsey wasn't saying good night anytime soon. "Trouble" came back as the first encore and I have to admit, it is my favorite song of Lindsey Buckingham's. I love it more and more as he's shed the production of it over the years, and this bare acoustic version tonight was just perfect.

"The big machine vs. small machine ... the same force that makes the world go around ... it all comes down to the collection of choices we make ..."

"This song (Seeds We Sow) is about those choices."

From his new album, Seeds We Sow, the title track, with its bellowed vocals, then breathy whispers leading to urgent exclamations, chilled us to the core. His guitar sounded like rain in the theatre on this pre-summer night. With the audience completely ensconced, he left on the highest note of inspiration for not only music, but lessons in life. We can reflect and guide the growth gained through balance, choices and never abandoning ourselves. 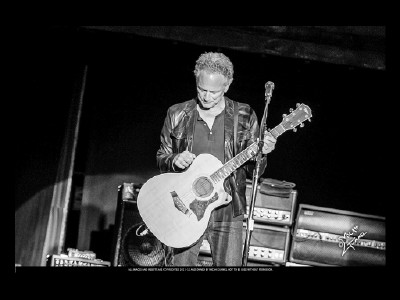