~with Special Thanks to Valerie Jensen Lefevre.

Mountain Park is an open air venue with rolling hills and a covered stage, that used to be an amusement park. It kicked off the summer season of shows this year with Mavis Staples and Bonnie Raitt. On a beautifully cool pre-summer night, the mountain was ablaze with these soul sisters just doing what they've always done - courageously belting out what is on their minds - and lucky for us, it is earth moving timeless music. 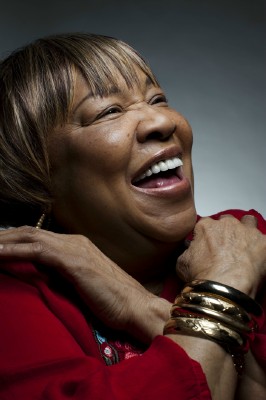 Grammy award winner, Rock and Roll Hall of Fame member, Mavis Staples, has never given up her gospel roots, and she sings to the masses even still. "I Am His and He Is Mine,"  started off the show tonight in a capella with the band singing along. The clapping and rhythm would move anyone. Tonight, it was the music and Mavis' welcoming presence that created this spirited community.

Adorned with a black flowing outfit that sparkled with embellishments, the Queen took court to create an evening filled with historic music.

"Didn't Old Pharaoh Get Lost (Creep Along Moses)," is so catchy and funky that Mavis could part the Red Sea herself with the energy she calls up. Her vocals are so fast and crisp, a modern rap artist might want to sit down with some good Mavis and take a few lessons from the expert deliverer of the lyrical rhyme! The low bass vocals brought it on home.

"Hello from the Windy City!" Mavis, a Chicago native, commented on how she liked the name "Holyoke," and that anything with the word 'holy' in it is good.

"Wrote A Song For Everyone." There are certain things that come through in soul and blues music. To us, it's the true sound of the artist with their basic instrument that is heard, unedited. There was a raw, cathartic experience that was communicated through this Creedence Clearwater Revival classic. With vocals from Mavis, it brought us in.

"The Weight," written by Robbie Robertson, released by The Band, was played in tribute to Levon Helm. "We'll meet in the sweet by and by," she said. Not a dry eye in the house as the sun set on this mountainside. There was peace in the valley for sure, but a missing of these musical legends that seem to be passing through all too quickly.

"You Are Not Alone," is an acoustic song written with Jeff Tweedy from her new album, You Are Not Alone. Tweedy is from the contemporary band, Wilco and has collaborated with Mavis to publish a great record that was released in September, 2010. I read an article in the Chicago Tribune, by Greg Kot, however, that said the best thing Tweedy did for Mavis' new record was to step aside and let her keep her touring band. They are called the 'secret weapon' of her current sound and are well respected in the music industry, because they "let Mavis be herself."

"Freedom Highway," brought in some great blues guitar riffs from Holmstrom and had an amazing upbeat drive. This song has been covered many times and to hear Mavis Staples lead this march is just historic. A soul mover, that's what Mavis is, the real deal. She is unstoppable.  This song was played by the North Mississippi All-stars, whom Mavis has done some collaborative projects with, especially honoring Jim Dickinson in the song, "The Meeting." She mixes well with the families of blues and elevates the songs with her inspirational energy.

"Keep Your Eyes On The Prize," sent a low down, don't mess with us,  inspirational message. Holmstrom's solos in between had blues riffs that were sharp, while Turmes kept time and Mavis held the peak of the performance, while cheering on the band and the crowd. Hodges is a great percussionist with his maracas and cymbal magic.

Mavis finished the set with the part of Staples history that we all know and love. The 1941 Staples Singers iconic classic soul song, "I'll Take You There." She took the smooth groove and added some SCAT! Her vocals just create something new every time she opens her mouth. With screams and howls from the crowd, Mavis messed with us a bit and said 'play your piano!"  to Rick, the guitarist! Then she hollered "RICK RICK RICK ... play on it!" The next move was on the quiet bass player, Jeff Turmes, getting him to get down and boogie,  "Jeff, I need you here, help me out ..." After some jamming, she slowed it down and called out to the crowd ..."Can I hear you say YEAH!" "Say YEAH!" Now listen, we're not gonna work here ..." She asked for all the" beautiful spirits" in the crowd in "Holy-okey" (poking fun at the name of the town), to 'take us there." "Is everybody ready?" "Take us there!"

Finally, the Holmstrom approached the crowd saying, "We are talking the first family of gospel, soul and members of the Rock and Roll Hall of Fame, so we need you to drop your socks, let your hair down, get naked, jump in a pile, we don't care whatchya do ... just put your hands together!" There aren't too many words a pen can catch after that. Mavis left her message with us loud and clear:

'The Staples Singers, the Staples family, we've all been taking you there for 62 years!" 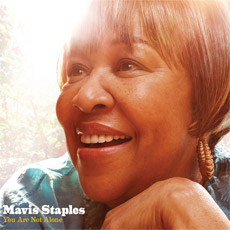