Photos courtesy of the Cult management.

As the lights went down in the Hampton Beach Casino Ballroom the cover from the Cult's latest CD, Choice of Weapon, was projected onto film screens on either side of the stage. In the darkness, sounds of tribal beats and chanting surrounded you. When the drumming stopped, the Cult took the stage and we were off...running like a pack of wolves through the night, stopping just long enough to do a chorus howl.

With opening acts, The Icarus Line and Against Me! raising the crowds’ energy into a splendid fervour, it was The Cult’s frenetic pace and intense, fiery spirit that sent the wild audience over the rock-n-roll edge. Kicking the night off with an old fan favourite, Lil’ Devil, the Cult segued right into one of their newest, fist-pumping songs, Honey from a Knife. Switching gears they then played the beautiful, and artfully timeless, Rain. It was full steam ahead when they torpedoed into another amazing song from the new CD, Choice of Weapon, entitled Lucifer. 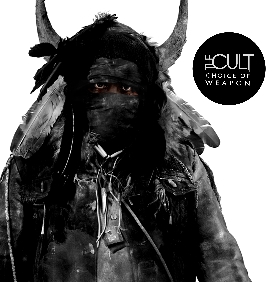 The set-list for the evening was a great mixture of new songs sprinkled in with the old and, with the next few songs, brought die-hard fans back through time as the Cult rifled through their musical repertoire, making their choice of weapon – music - and pushing play.

From the ever popular Fire Woman to the howling Wildflower and energizing Spiritwalker, Astbury and crew were ablaze. The ballroom was an inferno of intense energy as unchained forces between band and audience permeated the air.

Like Aladdin riding on a magical carpet, Ian was front and center dancing and holding court upon his multi-colored Indian rug; and instead of holding a lamp, he held a tambourine, which he shook so hard the cymbals flew off like silver birds fluttering overhead. Chris Wyse was amped up - very exuberant and smiling like the Cheshire cat with a story to tell. Mike Dimkitch was having a good ol time and interacted with Chris constantly. John Tempesta was a mad-man on the drums getting the crowd going and in the groove. Billy Duffy was on fire, sizzling on the guitar - relaxed yet tight. This band line-up works well together and it shows in the candor they have on-stage.

The Cult came and conquered. The band had nothing to prove and all the more to gain from the love of their fans that came out on a warm summer evening to hear their music. Within the lyrics there is innocence, beauty, purpose; a message within a message within a story. Behind and within the music there is intensity, glory, power, edge; sounds from a place around, beside and within the core. Music is the choice. It's omnipresent and universal, it has soul, fire, mystique, passion, power...it is, The Cult.

"Let all the children kiss the sun before they sing their last song. I will have the whole world to make music with me. Spiritwalker, Dreamwalker...Starwalker...Sunwalker...Spiritwalker"

Nobody left disappointed or empty-handed.  John Tempesta threw out drum sticks and Ian Astbury tossed tambourines to the wild audience; making one attendee, an 18 yr-old named Tahlia Jacques, exquisitely happy. Ian saw her give up her tambourine to the woman behind her. With hand gestures Ian said he would give her another one when the next song was over.  Ian kept his promise and rewarded her by walking to where she stood, leaning out and over the stage then handed Miss Jacques a tambourine.  It made the night memorable and special to her, as this was her first ever rock concert and it was to see the Cult.  Miss Jacques cut her teeth listening to the Cult music, as her mom is a big fan, and now she is part of the next generation of Cult fans dancing to the tribal beat.

The Cult continues tour through North America until August 19, 2012.

Honey from a Knife

Rise (added to encore not on original set-list)

Born out of the ashes of the UK post-punk scene, The Cult evolved to become one of the most influential and controversial rock bands of the late 20th century, selling millions of albums, headlining arenas and stadiums around the world, infusing innovative possibilities into the worlds of music and art, and quickly ascending through the ranks of the indie music world to achieve global status. As early as its first American tour in 1984, The Cult became one of the handful of important bands in the U.S. post-modern and hard rock communities. The band was embraced by the lost children of The Doors and Velvet Underground, and a generation that was waking up to the influence of 60s and 70s rock icons like Led Zeppelin, The New York Dolls and David Bowie. Formed in Brixton, London in 1983 as Death Cult, The Cult’s music transformed from punk rock to post-punk, psychedelia, heavy dance music, and transcendental hard rock. As one journalist noted, “Using a few simple riffs and images, The Cult creates an entire environment, one more exciting and stimulating than our own.” And that may just be what separates The Cult from other artists. Imagery is all-important to vocalist/lyricist Ian Astbury, imagery in the music and in the art that accompanies the Cult’s projects. Astbury is attracted to words and the image that each word creates. He is engaged by the power of nature, folklore, the concept of destiny, animal power symbols, the survival of the species, spirituality, and certainly the Native American myth and culture, a subject of many of The Cult’s songs. The constant core of The Cult is Astbury and guitarist/composer Billy Duffy. Attitude incarnate, the chemistry between these two vastly different artists - equal-parts genuine affection and palpable tension - remains the source of their long-standing partnership. Duffy grounds Astbury’s esoteric side with a hard rock perspective, and there is no doubt that at all times, these two have each other’s backs. In 2011, The Cult – Astbury, Duffy, drummer John Tempesta and bassist Chris Wyse – recorded Choice of Weapon, the band’s first new studio album in five years, set for a May 22, 2012 release date on Cooking Vinyl Records. Long-time Cult collaborator and producer Bob Rock put the finishing touches on the foundations that were laid by producer Chris Goss. The album’s 10 tracks, reveal the band at its rawest and most visceral, encapsulating cinematic visions and themes of love, revolt and redemption. According to Astbury, “We don’t have fans, we have devotees. You either need it or you don’t. You either get it or you won’t. There is nothing casual about The Cult.”

S.A. Hussey is a freelance writer for is also a novelist and writes for other websites. You can visit her blog here: http://planted-n-paged.blogspot.com/

Bluebirdreviews is on FACEBOOK. Like our page for daily song posts, album and live show reviews and site updates!