Get ready. Langhorne Slim, Jeff Ratner, Malachi DeLorenzo, David Moore and the visiting Sam Duffy, are coming to a theatre near you. Their mission? To get you out of your seat. Langhorne invited this Word by Word crowd to get up and dance and the literal group politely sat in their leather Colonial seats, waiting. Someone yelled from their corner, "Make Me!" Langhorne, always the gentleman, shouted back, "That woman is fair, that's fair!" He committed to the process, "We have a job to do." By the end of the show, people were dancing on the stage ...twirling in royal blue evening wear and sparkly hippie tunics. With the guitar, upright bass, banjo, fiddle, drums, and Langhorne's rich voice, it was certainly a festival of words in color and sound ...well done and thank you.

The band opened their set with "Be Set Free" the title track of their latest album. It rolled over the scene like a reassuring summer breeze. "Restless" from the self titled second album was true to its recording and a solid foundational song to encapsulate the genre range of what to anticipate. "Say Yes," the upbeat indie anthem, pulled in the crowd and had them yelling, "Yes, Yes!" in response. 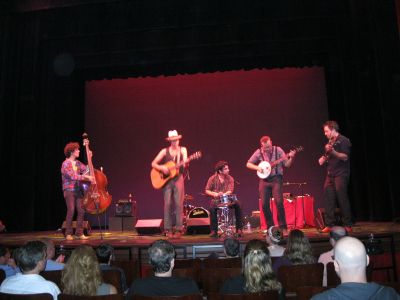 Sam Duffy on the fiddle was announced as the special guest. Having seen Langhorne and his band play last month in Northampton at the Iron Horse, I've been spoiled to believe he'll be at every show !

We were 5 rows from the stage and the theatre was such a personal venue, that the ballad of Collette seeemed re-written just for tonight. The story is told in the phrasing, the tone and pace of Langhorne's voice, the building of the complexity of the instruments and the grande finale. By the end of the song, a jamboree was under way "...here she comes ..." and there we go, we've lept, once again, into the Langhorne atmosphere.

The wit of Cinderella with its back and forth exchange skips by and keeps the mood light, yet the instrumental expertise to pull off this song is made to look easy. For some reason, and I have to research this, the refrain of the drums in this song remind me of the early Replacements. DeLorenzo is quick and crisp as he moves the whole sequence along. Maybe it's just my Westerberg-ian bias finally coming through. Other reviewers have said Langhorne has a punk influence, which I think makes it hard for people to force him into any genre. That's the point, folks, you can't and shouldn't force Langhorne into any genre. This keeps us listening.

Langhorne formally introduces the band and quickly folds us toward "Into the Midnight." I hear someone a few rows sideways murmur, "Oh yeah!" A veteran fan, waiting for their song.  This song was an "essential" when Langhorne was voted by Gibson guitars as one of the best singer/songwriters you should know about in 2008. http://gibsonshowcase.org/en-us/Lifestyle/Features/6singersongwritersyouneed/

Langhorne uses his soul influence to rile up the energy. "I Feel Good" "I Feel Alright" is shouted back and forth. He repeatedly abandons his mike and walks through the crowd, comes up, paces the stage, reaches out, hails us up.  To me, it channels the audience-response style of classic James Brown, Otis Redding, even Sam Cooke. But I'm also learning its a folk thing, too. This interface with the crowd is so intricate to each show, it is best described as a "Langhorne" thing in the "Slim" genre.

A new song is announced, "Take My Hand". OK, give it up, where can we download this? Having been at a recent show, there was no shortage or repeat of a story and tonight he told us about his grandfather Sidney's advice. "Sean, I'm always singing and every chance I get I try to smile." Langhorne, being the humble man that he is gives us the caveat, "For bastards like me sometimes its hard, when you guys get the answers, let me know." We're taken, people smile and laugh. Sometimes it's in asking the question that we get comfortable enough to no longer need all of the answers.

Langhorne works toward the edge of the stage and acknowledges apologetically that we'll come down for a moment, "I Love You, But Good-Bye." from his latest album, played acoustically. Beautiful. Sometime soon I want to hear "Lord" or "Drowning" played live, even "My Future." There are roots of this artist deep in the blues. I think the success of a blues song is in the simultaneous reassuring tone of the singer, pain encapsulated by warmth. There's a confidence and a 'we're all in this together" quality about this band that prepares the crowd for any blues or soulful lyric.

Langhorne's stage presence and attachment to his guitar (and repeated detachment from his hat) is also something that takes the audience quickly. He moves in and out of his role while he's playing which keeps the listeners grounded, never straying too far from the human connections in the room. He's also a riot to watch on stage. He kneels, flops on his back, dangles his feet over the stage, yet keeps playing. He points, "I kiss you, miss you, you're my favorite friend" changing a word or two in the lyrics, just to make sure we're listening.

"Mary/Cut It Down", with the whole band involved, everyone clapping, sparked instant funky commotion. Followed by "I Need Your Lovin" and "Spinning Compass" and people were changing their seats around like musical chairs. I think "Honey Pie" was in there somewhere. I was dancing too, and kept losing my pen.

During "Electric Love Letter" the band moved to the front of the stage, including Jeff Ratner and Malachi DeLorenzo. Ratner's upright bass is pivotal to the quality and warmth found in these songs. They approach the audience head on which makes the melody of the song more relaxed and its genuine message easily accessible. The stories are new, and pretty funny. A flat tire during the last visit to Massachusetts, where he notices salt in the air ? This has the New England audience wondering where he was; the Cape ? Boston ? People were asking him about it after the show, very involved, indeed. Moore is quietly playing the banjo in the background and Langhorne laughs that his friend David Moore happened to be playing banjo while he got the flat tire too! Who wouldn't want David Moore to show up in any situation with his committment to the banjo? You must see this man play it live !

"Back to the Wild." "Checking Out" "Worries" and "I Love to Dance" wrapped up the night and sampled from Langhorne's wide selection of music and recordings.

The festival director started a question and answer session about Langhorne's hat. Langhorne was consistently funny, genuine and attended to every detail of the crowd's request (except the marriage proposal that was shouted out by a woman in the audience ... we all have our limits, yes?).  "Diamonds and Gold (acoustic) and "It's True" finished the set. These two encore songs easily left the crowd banging on the floorboards for more.

Langhorne, stay awesome ... and we'll see you at the next show !