Photography and Review by Bluebird.

I had some directions from the Managing Editor of the Boston Blues Society, as I headed out to the Newport Folk Festival for my first time this year. "Bird, if you hear any blues out there, you have a standing order to send me a review!" I had first heard of the Alabama Shakes from one of the readers here on Bluebirdreviews. So I knew well enough to make sure I stayed in my spot, to catch this fast rapidly rising band, while the multiple stages were running their sets. You want to catch the Alabama Shakes here in the Northeast? Act fast, they've sold out the House of Blues in Boston and Terminal 5 in NYC. When I got back from Folk Fest, I sent Mr. Managing Editor of the Boston Blues Society some music from the Shakes. He said, "Why don't you tear into this one (first)."

I was at their set during sound check and the band took this very seriously. Playing everything from blues riffs to Zeppelin phrases, their warm up could have been a performance in and of itself. A fan yelled out, "We LOVE YOU BRITTANY!" She smiled and quietly went on with her work. They take their music to the ultimate note. Then a big chicken came out! This is the type of fun mayhem you should expect from the Newport Folk Festival. Silly antics, friendly people and dancing chickens, but the bottom lines always come down to quality music.

Brittany Howard's powerful voice immediately took over the crowd as the formal set started. When the popular, "Hold ON!" was played, the crowd quickly danced in unison. "Hang Loose" bellowed, and she took a moment to thank the crowd for their applause. "How you doing?" "Ya'll gonna ask me how I'm doing?" "I'm all right ... you know I'm always all right ..." Her intensity, coupled with a cool and casual attitude toward life, calmed the steamy crowd immediately and brought them right into the fold.

What comes to mind when you are there in the summer heat, with the cheering crowd in the presence of Brittany Howard and the Alabama Shakes? Gratitude. If you can imagine the power of Aretha Franklin, the spunk of Tina Turner and the elegance of Mavis Staples, then you're on the right track. Take this sound and hear it updated to reach out to younger audiences, yet present in solid soul to blues, with a band that can rock it out, well then you've got a small piece of what went on here. 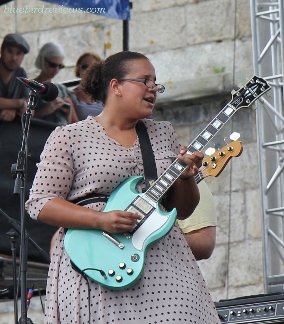 "I wake up, rise to the sun, I go to work and I come back home." "Rise To The Sun," from their new record, Boys and Girls, adds a world music sway to their catalog, and then edges it out with some cut to the core almost punk drummer phrases. There was something about this song, that was grounding and accessible, it would help us rise above anything that life could send our way. Many fans in the audience noticed there was an ASL interpreter in the side corner who was jamming out too. She put just as much feeling into her signing, as Howard and The Shakes put into their performance.

The band of the Alabama Shakes is remarkably talented - and eclectic. The line-up consists of Brittany Howard, Heath Fogg, Zac Cockrell, Steve Johnson and Ben Tanner. The keyboard work, bass, guitar and drums, had just enough funk to keep the crowd moving, but added a rockin blues back drop, to make it good and loud. The whole set had a blues-gospel underpinning that engaged everyone, and the crowd gave it right back. They weren't old school soul, though, as this is a fresh look at music for the future. You just have to hear them to understand what I'm trying to express in words. 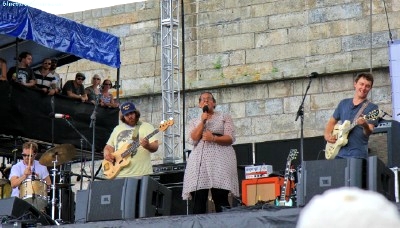 When Howard belted out her soul ballad, her voice rose up, and the band was so in tune with her, that they waited for her to finish her note to come down, before they went into to the next part of the song. My old school comment aside, I could swear Curtis Mayfield was watching over us at this festival, because Howard's voice seemed to be as sweet and mellow, as any soul legend I've ever heard. But again, there is plenty of room for this band to rock out with bold licks that match Howard's vocals, and a contemporary sound that blends all the best of good music from many genres. Mid-set, the crowd was on its feet and singing along, even if they didn't know the words. Young folks were doing punk jumps, people get ready, all ages were in the groove.

The Alabama Shakes have a new record out called, Boys and Girls.

Check out their catalog of music by visiting their website at: http://www.alabamashakes.com/home .

Support your favorite musician by buying their music. 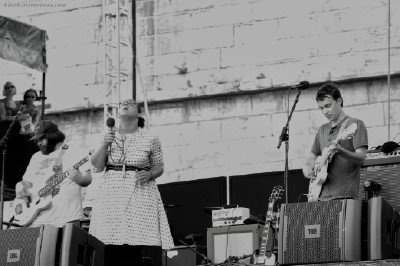