You save me and Train will save the day. After a long intermission and a great performance from Butch Walker and the Black Widow Spiders, the lights went down at the Calvin Theatre. Lasers found the stage and Train blasted out "Parachute" for their first song. Massachusetts ! Oh Yeah ! and "Get To Me" came on with lights.

Pat Monahan started belting out the first few words of "Drops of Jupiter" and stopped dead. "No, You're not ready for that yet !" He said. The frustrated crowd roared. They were ready for anything. And that is exactly what happened, anything and everything, one rockin suprise after another.

"Meet Virginia" came then and was an instant sing along. The guitarist is introduced, "JIMMY!" The guitar solo expands and a screen with fire blazes behind the band. "She's on Fire" and the band is wearing cowboy hats? A few more bars into the song and Monahan pulls at least 6 young women from the audience, gives them red shirts to wear and they become the "Trainettes" They stay onstage dancing along, a few of them share the mike with Monahan. The heat is on around the room. "I Got You" a bullhorn blows and the crowd is wild. Monahan takes a camera from someone in the audience, takes a picture of himself close up and gives the camera back. Wild pandemonium. This is arena rock again. Then it gets quiet, acapella- "when I float on this ocean when I look to the sky, something tells me your here..." "When I Look To The Sky." was beautiful.

He tells a story of a friend who inspired him to write the next song. This conversation was about how until the end there is an angel that says "yes you can, vs. a traitor who gives up." "Calling On Angels".  "Save The Day" is next and Pat takes off his shirt and puts on a blue SuperTrain tshirt. There was a woman right in front of me with exactly the same shirt. I don't know if he saw her, but she couldn't have been more proud. "Marry Me' was ended with a room full of couples dancing and an actual proposal from the audience. "Congratulations," Pat says, taking it all in stride. "I Am", the first song written by Monahan and Scott Underwood was excellent, love the harmonica. 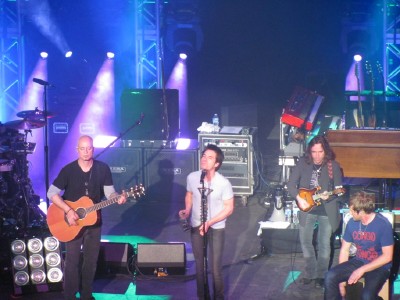 And then ... could it be ?? "WAY DOOOWN INSIDE" ... now I'm a huge Zeppelin fan ... crazy enough that I flew to London to see their 2007 Reunion Show ... these notes I hear and the crowd is ecstatic ... Monahan starts transforming into a version of himself as a rock god possessed by the young spirit of Robert Plant ... "WAY DOOOWN INSIDE" ... and the sweet guitar riff of not Whole Lotta Love, but "Ramble On" comes through ... whooosh ....OH YEAH ... I cringe when I hear other bands cover Zeppelin, but Monahan owned it, felt it, nailed the song.... whooosh ...At some point during the show, there was an announcement that John Oates was here and parts of a Hall and Oates song were played. I was crazy dancing, lost my pen at that point as well as track of time and sequence.

Midway the band switched over to Lou Reed's "Take a Walk on the Wild Side" and that was fun. "Save Me San Fransisco" "Free" "Soul Sister" and the set closed for the night with the crowd singing and dancing, house lights on the audience. Encore ! Finally, "Drops of Jupiter" and to my stunned surprise, "Dance the Night Away" by Van Halen with Butch Walker standing in for Roth at times.

"If Its Love" was a great crescendo and the sweet moonbeams of the rock sky flashed through the theatre. Great show! 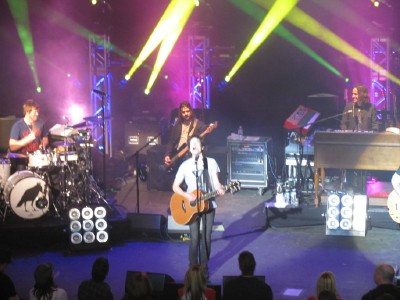