Whitey is a bass player in the rock band, The Tall Weeds. He has been writing reviews for BBR for several years now and is a trusted soul in music. He went to Mountain Jam  2012, this year in Hunter, NY. Here's what he had to say:

I had the opportunity to go to Mountain Jam on Saturday. Wow! Now I don't know a lot about the bands that played, but I love to experience live music! 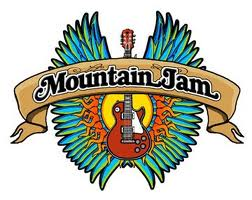 The 1st band I saw was "The Word". This is Robert Randolph, great steel guitar player, John Medeski on keys, and from the North Mississippi Allstars, Chris Chew on bass, with Luther and Cody Dickinson on guitar and drums. What a groove! I saw Luther play with the Black Crowes a while ago and dug him then. Great music and will be very interested in hearing more. They said they would be recording an a new record in the near future. Here is their first album , The Word, produced by John Medeski, released in 2001.

For more information about The Word, visit their page here.

Next I saw, Sister Sparrow and The Dirty Birds. They are a blues band, who had a small woman vocalist with a giant voice. She had a very "Janis" like voice. Then got to see blues guitarist, Matt Schofield. Wow! He rocked. Real good set. Huey Lewis' guitarist was in the band as well.

Gov't Mule was one of the headliners. I never saw Warren Haynes before. He is a very underrated guitarist. His playing was on fire, and his singing was soulful. The band jammed for a long time. I was very into their vibe. It was great.

They brought out the remaining members of the band and played a set of music in honor of Levon Helm. I was very moved by the music and love. Gov't Mule came out to jam some more. It was a great night and I became a fan of some new music. I will be at Mountain Jam next year. Till then rock on!

To purchase music related to this show, check out the Radio Woodstock Store here.

Read our review of Keys to the Kingdom by the North Mississippi Allstars here.