Republished with permission by S.A. Hussey from Rock It Write. 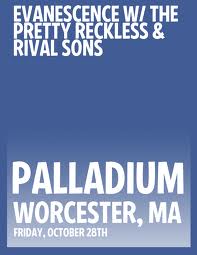 Jay, Scott, Robin and Mike rocked the Palladium in Worcester, MA.  From the head banging

opener "Gypsy Heart," and the blues-rock sound of "Torture," to the funky beats of "Pressure and

Time," RIVAL SONS held you spellbound with their down and dirty, raw blues and soul, mixed

RIVAL SONS is a band from Los Angeles, and they are a band to watch.  And watch, we

did.  RIVAL SONS took to the Palladium stage carrying their drinks, which brought a few hoots

and hollers from the audience, but once they set them down and started...this band impressed.

Right from the get-go the sound was bombastic! 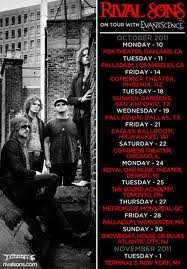 (The Doors) but with a twist of Ian Astbury (The Cult) for that true rock grit. Throw in a bit of Axl

is one helluva of a front man.  Scott Holiday's prowess on the guitar is captivating, mesmerizing

and spell binding. It's all there in his playing; from blues, to classic rock to soul and funk, Scott

means business and doesn't hold back.  Robin Everhart attacks the bass line and holds the

sound together, in an understated way; a true force from a storm in the making.  Mike Miley,

however, is the storm – the thunderstorm.  He attacks the drums with amazing ferocity and

RIVAL SONS has carved out and invented a sound that takes the best from classic rock, old

blues, earthy soul, with a bit of jazz just for good measure.  This band rocks it hard, and brings

it on home.  I only wish they were based out of Boston instead of LA.  If you have the

opportunity to see the powerhouse that is RIVAL SONS ... GO!  You won't be disappointed.

Pressure & Time is a great CD. If you're a fan of classic rock and blues, then I highly

recommend you add this CD to your playlist.

Preview/Purchase it on iTunes. 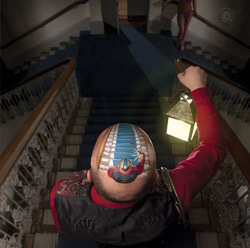 For more info, please visit the band's website at: www.RivalSons.com