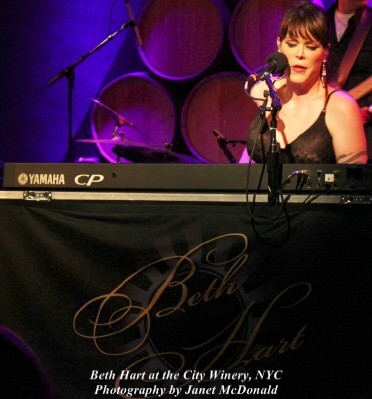 She opened the show with, "Sinner's Prayer" (from the album of blues/soul covers, Don't Explain) then lead a sing-song with the audience on "Trouble" ("give me my money back") and her amazing scat singing on, "Lifts You Up," was only the beginning of Beth's exciting show. A tender moment regarding her mother's love for Billie Holiday segued into a magnificent version of Holiday's song, "Don't Explain." The last song (before the finale) brought slow beats and mesmerizing sounds between her and the guitarist in, "Caught Out in the Rain," which was truly spell binding.

Her finale told a story about her purchasing a home in LA that inspired the song, "Ugliest House on the Block." In true Beth Hart fashion, "Baddest Blues," was played behind the keyboard and sung with as much passion and spirit as she could give. It left you on the edge of your seat and wanting more. Beth ended the set with a song written for her husband, "My California." "A man who should be given many medals for her driving him fucking nuts," stated Beth Hart. Beth sang this song as if he stood right there in front of her. She held nothing back emotionally – it was as raw and heart-felt as only Beth could sing it.

The passion, beauty and softness that sparks from her voice and encapsulates everything that she is, tells us she is a singer who gives everything she has to every performance. Beth Hart leaves nothing, but the blood, sweat and tears, behind. Ms. Hart's voice is the embodiment of legendary singers, reminiscent of the greats: Ella Fitzgerald, Etta James, and even the singer her mother loved - Billie Holiday. Beth Hart is an amazing singer and it was a privilege to see her perform.

Thru the Window of Mind

Swing My Thing Back Around

Caught Out in the Rain

Ugliest House on the Block

Get To Know Beth Hart:

Beth Hart's interest in music started at the age of 4, when she was fascinated by the Mozart piece of "Moonlight Sonata," and played it in the middle of the night. When she was just four years old, Beth realized that music was her destiny. "There was this commercial for pianos on TV," she recalls, "and the music was Beethoven's "Moonlight Sonata," which was the most beautiful thing I'd ever heard. So in the middle of the night, I got up and played part of that song on the piano. My mother, father and all the other kids came out and gave me so much love and attention, the ham in me knew right away that this was what I wanted to do. I just knew... "I never thought I'd be a singer," she continues. "I thought I'd be a  classical pianist or cellist, go to Juilliard. When I did start singing, I took opera lessons and my teacher was wonderful, but one day she said, 'Beth, I don't think classical is for you, because you like to do your own thing with the music.' And she was right."

Beth's formative musical tastes were eclectic, taking in jazz, rock, blues, gospel and grunge. "Billie Holiday and Ella Fitzgerald: I'm fascinated by them," she says, "but then when I heard Robert Plant and Chris Cornell, I couldn't get over their power. But then, Rickie Lee Jones and James Taylor, their voices were so lovely and soft..."

Beth worked with top producers on 1996's Immortal, and scored international hits with cuts like "Am I The One," but today, she contends it was on 1999's Screamin' For My Supper – home to the smash-hit "LA Song (Out Of This Town)" – that she found her voice. "If I could have my way," she says, "I'd love it if people bought my new album (Bang Bang Boom Boom) and Screamin' For My Supper simultaneously, because I think that record is where I became a real writer."