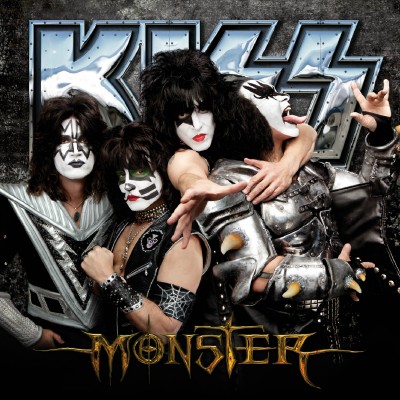 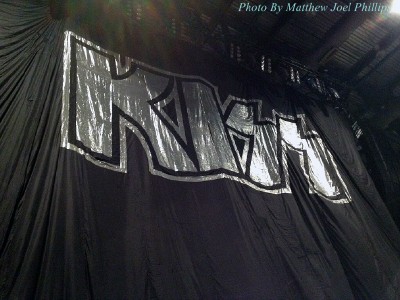 The first time KISS toured New Brunswick they shocked Moncton in 1977 on the "Love Gun" tour. A planned return to Moncton during 1990's "Hot in The Shade" tour was cancelled after Paul Stanley cracked his ribs onstage in Pennsylvania.

It would be another 35+ years before New Brunswick had another confirmed KISS sighting.

Jacksonville, Florida band Shinedown opened Wednesday night's show, and I found them a curious selection as I rather expected a Canadian band like Hamilton's recent Juno Award-Winning group Monster Truck to be on the bill. In an amazing coincidence, we met my barber at the show by accident (among the thousands of other people) who had cut my hair just hours earlier and had mentioned going to the show just to see her favorite band, Shinedown.

Arriving late into Shinedown's set, we made our way to the left side of the floor just as a huge, black KISS curtain was being raised. Not 15 minutes later, in total blackness, the curtain dropped and the show got underway (an extremely quick and appreciated turnaround from opener to headliner).

Flaunting their first truly original set piece design since 1992's "Revenge" tour – that featured a giant replica Statue of Liberty (which crumbled throughout the show to reveal a glaring skull; how metal!) – the latest KISS show has been reimagined as a gigantic spider-shaped set piece with metallic legs that raised and lowered around founding members Gene and Paul and (now) long-time, dependable hires Eric and Tommy.

The spider monstrosity always managed to miss cleaving their heads at just the right time and provided platforms for our heroes to float out over the ecstatic audience. Close to the very end of the show, with a blizzard of white confetti falling all around us, seeing KISS up close in this fashion was my favorite part of the show. 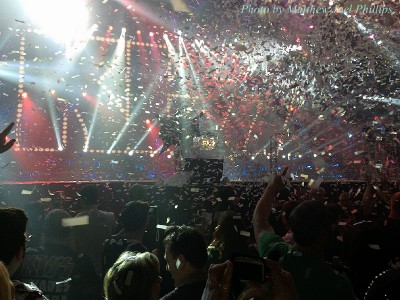 Tonight was the first time I've been really impressed with the KISS stage since the early '90s, which has typically been a high-tech recreation of the '70s/"Love Gun"- era designs that didn't offer much in the way of creativity when compared to other acts like Iron Maiden, who bring out new and stunning stage themes for every tour. The modern KISS stage is filled along the back with gigantic screens, and they are impressive, but I miss the old days when a gigantic KISS logo, made from lights, once dominated the back of their stage.

The last time I saw KISS was on the "Psycho Circus" tour in Portland, Maine – 15 years ago – and coincidentally when the curtain dropped they opened with the same eponymous track, "Psycho Circus" (a top ten hit in Canada in 1998).

Needless to say it was quite a different crowd for Saint John in 2013 than back in Portland in 1998, filled with kids of every age, not unlike KISS' heydays in the late '70s when the shock rockers remarkably became a family attraction. And this night you didn't have to look far to see someone dressed up in costume, whereas dressing up like KISS was still somewhat passé in the stripped-down, angry '90s.

We sat five rows back from stage left (Gene's side of the stage) and right in front of us were a dressed-to-kill duo of Mr. Stanley and Mr. Criss (wearing one of the most convincing "Destroyer"-era Catman costumes I have ever seen) who graciously posed for photos with fans throughout the night.

Since KISS' original lineup reunion in the late '90s, and subsequent "Farewell" tour, their setlists have been generally filled with greatest hits, but this setlist was quite heavy upfront, cramming in some of their heaviest songs like "I Love It Loud", "War Machine" (both from 1982's "Creatures Of The Night", a very underappreciated album), "Heaven's On Fire" and the first single from "Monster": the fiery rocker "Hell or Hallelujah".

Greatest hits (that were never really hits) like "Deuce", "Cold Gin", and "Firehouse" – which are in KISS' top 10 most played live songs (as seen here:  http://www.setlist.fm/stats/kiss-6bd69ec6.html ) – were skipped, in favour of these heavier songs, including 2 songs from "Monster" and 1 song from their previous album, "Sonic Boom", the first album recorded by this version of the band that also debuted at #2 (KISS' highest ever album chart).

The plunky opening of "Black Diamond" was the only real ballady moment of the entire evening. I would have taken a "Forever" in place of some of the heavier songs, but this show was not about to be slowed down.

Signature songs and stage antics were in the middle of the set, starting with Tommy Thayer's rendition of Ace Frehley's signature song, "Shock Me" (only the first half of the song) that ended with his own Ace-a-like, recent tune, "Outta This World". A drum and guitar solo followed as Tommy teased the crowd with the opening notes of "Oh Canada", and he also played what sounded like some Led Zeppelin riffs. 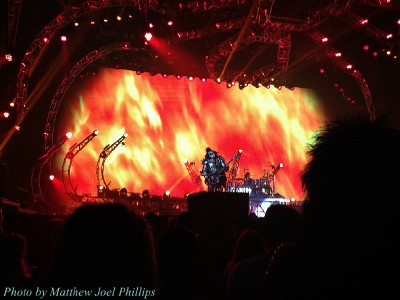 Gene belched fire and spit blood, and absolutely no one was shocked (maybe some were grossed out), but his ascension into the belly of the monster right before his signature song, "God Of Thunder", was still thrilling. It was a speedy ascent, near perfectly timed to bring him through a rectangular opening in the spider's belly, and for a moment – when it looked like he was off course – my body froze.

Never one to be out staged, Paul Stanley flew out across the crowd during the opening of "Love Gun" and I can only imagine those in the cheap seats got quite an eyeful during his extreme close-up performance. Paul stayed at the back, in the spinning light of a purple disco ball, for "Black Diamond", this time with drummer Eric Singer on vocals. "Black Diamond" is usually sung by whatever drummer is in KISS at the time: first Peter Criss in the '70s, Eric Carr in the '80s, and now Eric Singer in the '90s and beyond.

This leads me to my negatives about the show which, as a super fan of KISS, are hard to admit.

Paul Stanley is losing his vocal range and while I would guess most of the crowd hardly noticed, certainly I noticed his struggle to scream the opening to "Heaven's On Fire", l and noticed the make-believe Paul and Peter gesture downward to eachother during "I Was Made For Loving You" (indicating how the song was down tuned to accommodate Paul's voice). Tommy and Eric filled in for Paul by singing a lot of the second half of "I Was Made For Loving You".

Still, Paul's voice issues are not nearly as apparent as David Coverdale's (from Whitesnake) who is also known for his high range, but who – like Paul Stanley – commands a stage with more than just his well-worn pipes. Now in their sixties, both Paul and Gene still move around on stage in much the same way they always did. I've never seen anyone happily throw as many picks into an audience as Paul Stanley can in one song, having maybe 30 picks strewn around his guitar body that I watched him fling for 40 or 50 feet into the crowd.

There was (and always is) lots of fan interaction from Paul, this evening during "Say Yeah" (the last song on "Sonic Boom") and "Calling Dr. Love".

I found the overall KISS sound at Harbour Station to be average and slightly harsh on the ears, and wondered if the strange setup of metallic spider legs did anything to affect the sound. I've been up close and personal for Alice Cooper and The Australian Pink Floyd at the same venue, which I felt had a better sound. The busier, newer songs weren't as discernible as the crunchy, simple riffs of something like "Calling Dr. Love". The nuances in "Say Yeah" and "Hell Or Hallelujah" kind of got lost in the noise.

The show's finale had no actual "encore" break. "Rock and Roll All Nite" closed the show, as it always should, and filing out on Harbour Stations' confetti-covered floors – with "God Gave Rock And Roll To You II" playing over the speakers – I was thinking about something simple yet effective that Paul had said earlier on.

Paul begged the question "You don't want us to go yet, do ya?". He later told the audience: "I count to three and everyone say my name as loud as you can!" to a thunderous reply that maybe he wasn't expecting when he exclaimed "Man oh man, where do we take it from there? Well hell, if you can do it like that the first time, just imagine the second time..."

Earlier he told a story about Detroit Rock City and how the essence of that song could be any rock-loving city, like, Saint John for instance. A good frontman knows how to make every venue feel special and Paul (and likewise his bandmates) excels at that.

Shout It Out Loud

I Love It Loud

Shock Me / Outta This World

(Gene spits blood and flies into the belly of the monster)

(Included the instrumental bridge from The Who's "Won't Get Fooled Again")

(Paul flies over crowd to back of the venue)

I Was Made for Lovin' You

Rock and Roll All Nite