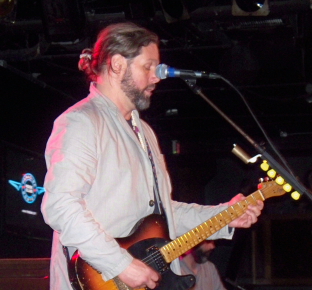 Once inside the building, everyone checks out the different spots to stand and decide where will be the best position to take in the performance. I hurry to the bar, grab two beverages, return and wait for the band to come to the stage. After casing out the place, we settled stage right and directly against the equipment filled stage, within three feet of a Pedal Steel and a great view of every musician's location. Rich Robinson casually walked onto the stage following Matt Slocum, the keyboard player, Joe Magistro, drummer, Ted Pecchio, bassist and Dan Wistrom, Guitarist and Pedal Steel Guitar. Wistrom also sang harmonies and traded leads with Rich throughout the set. The band immediately took the ready, set, go approach and opened with "I Know You" from the new record, a good solid Stones like rocker and went right into Unfortunate Show also from The Ceaseless Sight. The band played the new songs straight ahead and the crowd was theirs when the first chords were struck.

The Paradise has plenty of space and a balcony, while both floors seemed quite full. A few more songs in, the band started to play another new one, "The Giving Key." This was when Wistrom made a vocal error and Rich quickly looked his way smiling and gave a quick laugh as the music stopped with Rich commenting that, maybe, this would be acceptable since the tour is just beginning. The audience just chuckled with the band, while Wistrom quickly found his notes and the song was executed with precision.

Another time Robinson's guitar tech handed him a Gibson ES 335 tuned in the key of 'G' instead of the needed 'C'. After one or two strums Robinson stopped and apologized, while the tech handed him a guitar in the proper Key. Rich told us, "You don't want me to play that out of key, My C's look like a 'G'", as if to say 'my bad'. Those instances are priceless to some of us fans; it reminds us that no matter how amazing and fluent these masters play together, they are still human. I personally love that stuff.

I will be catching the band again in August, and I guarantee there will be no notes used by anyone, so in an odd way, for me those moments are unforgettable pleasures. Having Rich Robinson's first two solo records and being fortunate to get an advance copy of the new album, I knew the songs well. Each one of them may as well have been 'classics,' knowing them well enough to sing along.

The set had some astounding jams where you felt you were in the zone with the players, everything is soaring and perfect. Smiles appear as the magic happens. Being a fan of Rich's guitar tones and solos, I was in heaven as he played terrific riffs one after the other. Similar to hearing The Black Crowes and Rich's playing there, but at the same time different. 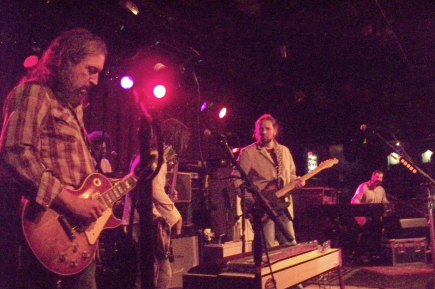 Seeing this band up close and personal in a much more intimate setting Rich seemed liberated, this was his solo work being brought to life, you could sense the fulfillment. All the while Dan Wistrom was playing incredible leads blending in with Robinson's. Pecchio is a fun guy to watch, fully thumping his entire body along with his bass. Magistro drumming was solid and never seemed to be anywhere except precisely where he needed to be and Slocum got some free time to hold court and entertain us with his mastery at the keys. Two songs from Robinsons first solo record, Paper, were played, four from his second record Through a Crooked Sun and the remaining eight from The Ceaseless Sight. 'Trial and Faith' gave way to 'Inside,' the set's final song.

The performance lasted an hour and a half, no backdrop and no hi scale lightshow. What we got instead was a no nonsense Rock and Roll performance, It's all about the music, was the message I got, and it couldn't have been any better than that. I'd say Rich Robinson and his band got their point across loud and clear. 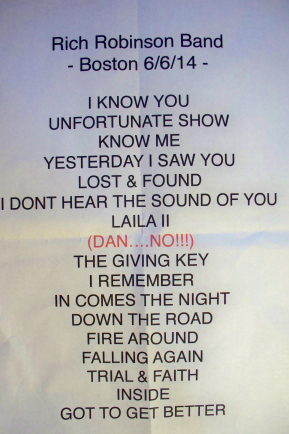 The tour has dates with the band sharing the bill with Robert Randolph, The Tedeschi Trucks Band, Jonny Lang and current Black Crowes band mate, Jackie Green. Shows are being added as the ball continues to gain momentum, even more so since the release of The Ceaseless Sight. Shows are scheduled overseas, Canada and across the entire United Sates through until the middle of September.

To THE END Records,  Thank You.