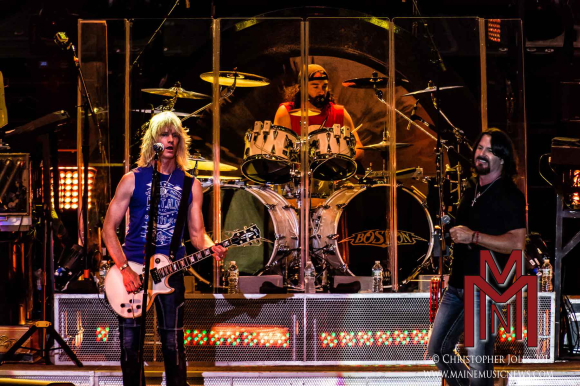 A huge highlight for local fans, Maine's own drummer Jeff Neal – who has been with the band since 2003 – practically put on a drum clinic and absolutely thrilled during the many musical interludes. Jeff tours with Boston in the summer but his real passion is teaching (Social Studies) at Windham High School.

Here is a recent video interview with Jeff Neal about playing with Boston and his days as a High School teacher:

Unlike many bands of their era, Boston hasn't toured or released albums consistently (six studio albums since 1976, compared with Cheap Trick's big catalog of 16) and this was their first trip back to the Bangor area (it was announced), in 20+ years.

Not that you could tell it has been that long. The ever-smiling 67-year old Scholz (wearing a blue knee brace on his left leg) looks 20 years younger, and the main men of openers Cheap Trick blasted through all 12 songs in their set like young punks.

Back in 1976, Boston was "climbin' to the top of the company ladder" in a music industry dominated first by disco and eventually album oriented rock (AOR) radio. The "corporate" rock scene that nurtured the likes of Boston, Foreigner, Journey and Bad Company has long flamed out from piracy, but fans still pack venues like the Pavilion and pay good money to see live shows, in and out of the rain.

As is becoming the norm, only e-tickets were sold for this show online, and I was worried that the rain would smudge the barcode on the tickets I printed and brought from home.

Doors opened at 6pm and after a thankfully quick line-up in the drizzle we found our seats four rows back. Under the cover of the stage header, we were mostly protected from Mother Nature, while fans just behind us got drenched all night long. A group of happily drunk people (who left their seats at least 6-7 times during the concert) kept asking us –with ever drunk faces – why we were always dry.

Openers Cheap Trick came on stage just as the sun was going down, starting with "Hello There", first appearing on their 1977 album "In Color" but eventually immortalized as the first song from their "at Budokan" live album; six of the 12 songs in their set were also on that important live record.

Three smokin' covers followed: "Ain't That a Shame" (a Fats Domino song that they never officially recorded); "California Man" (by The Move); and "Don't Be Cruel" (by Elvis Presley, which was a top 5 hit for Cheap Trick in 1988). Lead guitarist Rick Neilsen got a laugh from the audience early on when he told us how "really fu*king hard" it was scoring a hit covering an Elvis Presley song.

Back in the '80s it looked like the sun was setting on both Boston and Cheap Trick's careers, until each band had their only #1 hits with "Amanda" and "The Flame" respectively. (On a personal note I attended the show with my high school buddy Chris. It just happened to be his birthday the very next day, and he also informed me – while we were sitting in our seats before the show started – that "The Flame" was "his" song with fiancée Paula.)

Cheap Trick is currently touring with a near classic line-up of lead guitarist Rick Nielsen, bassist Tom Petersson and singer Robin Zander, but with a new touring drummer, Daxx Nielsen (Rick's son), whose been with them since 2010.

The rest of Cheap Trick's set seemed to be – for this relatively new Cheap Trick fan – a collection of greatest hits from their "Dream Police" album ("Need Your Love", "I Know What I Want" and of course "Dream Police") and other guaranteed crowd pleasers like "Surrender".

Before Cheap Trick took the stage, sound bytes of Apu from The Simpsons cartoon – singing "Dream Police" – got a big cheer from the audience.

"I Want You To Want Me" is the song I most associate with Cheap Trick, called a "heavy metal pop song. Cheap Trick doing ABBA - except a very heavy version." The original single didn't chart but the live version of "I Want You to Want Me" became their biggest selling single at the time, reaching #7 on the Billboard Hot 100. I had no expectations for Cheap Trick, having never been a fan for all this time, and I was very impressed with their stage presence and fan interaction and wondered how I never got into this band before now.

Brightly colored guitar picks lined their mic stands, and near the end of the show they would grab handfuls of picks to toss into the audience. We were able to grab blue and green signature picks from Rick (that is, when he wasn't licking them and sticking them to his face or forehead).

Rick appears to have as many multicolored guitars as he does picks, changing guitars for just about every song. A few guitars of note: a yellow one called "Uncle Pepper" that was made by Hamer for when Cheap Trick did "Sgt. Pepper Live". It features the airbrushed faces of each Beatle circe 1967; the ugliest guitar I have ever seen which was basically an orange box with a neck; an exact duplicate of his B&W 1979 checkerboard Explorer that is featured on the back of the "Dream Police" album (the original sits in the Rick's Picks museum http://www.rickspickslive.com ); an absurdly unforgettable 5-neck checkerboard guitar near the end of the show

Rick was also fond of flashing his open mouth for a girl photographer at the left side of the stage, and I learned later that he has two lower back teeth capped with a checkerboard pattern.

Where did this fascination with the B&W checkerboard come from? Rick's youth apparently; watching late night television and seeing the checkerboard pattern flash up on the screen when all of the programs for the night had ended. His youthful attitude also showed itself during the night when he kept flirting with two women in the 2nd and 3rd rows directly ahead of us, flinging picks right at them all night and making funny gestures.

The most impressive part of Cheap Trick had to be Robin Zander's lead vocals, still strong after all these years, and dressed in a black outfit almost as flashy as Rick's guitars.

Robin Zander is a guest vocalist on one of my favourite tracks of 2014, "Feeder", from the debut album by the Red Dragon Cartel. If you want to hear how good Robin still is, check out this song, but don't expect a pop metal ditty a'la "I Want You To Want Me". The Cartel is the new band of ex-Ozzy Osbourne metal shredder Jake E. Lee who all but disappeared from the music scene for the last 20 years, and has come back with a fury. 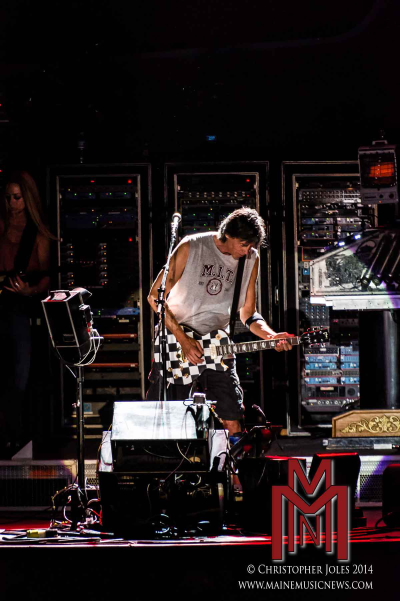 After a short break, when the night was perfect for an interstellar lightshow, the three giant spaceship screens at the back of the stage announced Boston, who set our collective faces to stun on the opening song "Rock & Roll Band".

Boston's show was a more moody affair of showmanship, musical interludes and sing-able tracks spanning their entire career, all played live by a band of four guitarists (including Tom Scholz), bass, drums and vocals. Every Boston album was featured in their setlist, except one, 2002's "Corporate America", which I suppose is not as hard to do when you've only recorded six albums in 38+ years.

Not unexpectedly, their 22 song setlist featured seven of the eight songs from the original 1976 self-titled album which is considered to be one of the best debuts ever, and also one of the most commercially successful: the aforementioned "Rock & Roll Band"; "Smokin'" (it was); "Peace of Mind" (a personal favourite); "Something About You"; the iconic instrumental that verges on progressive rock "Foreplay / Long Time"; and the song that I first fell in love with on the original Guitar Hero video game: "More Than a Feeling" (played surprisingly early in the set with 7 songs still to go).

The rest of the setlist was filled with three songs from the excellent follow-up "Don't Look Back", six songs from "Third Stage", two songs from "Walk On" and two back-to-back songs from their latest album "Life, Love & Hope" (released in December 2013 after an 11 year wait).

Over the years I've seen many performances from the touring ensemble Classic Albums Live who attempt to present albums like Boston's debut, or "Bat Out Of Hell" or Queen's "A Night At The Opera" just as you've heard them on record, "note for note, cut for cut". They often employ many extra musicians than a traditional band to help get that perfect sound, although they are by no means a cover band (they play the part, but they don't dress the part).

So it was a real treat seeing a real band like Boston, playing their own material, and creating that magical sound from the records, all live.

I've heard rumour of a future live DVD/Bluray coming from Boston, and I can imagine what a visual and audio treat that would be in 5.1 surround.

Sound is every bit as important as flash, I am sure Tom would tell you. Before Boston, Scholz received a bachelor's degree (and later) a master's degree in Mechanical Engineering from MIT, where he experimented with his own electric guitar pedals to create his signature otherworldly sounds. He also invented the trademark Rockman guitar amplifier that is cherished by studio boffins like Def Leppard, who used them on their diamond masterpiece "Hysteria" album.

The Darling's Waterfront Pavilion featured a new layout for 2014 which seems flatter, more comfortable and more efficient compared to my previous visit (The Beach Boys in 2012, read my other review here: www.bluebirdreviews.com/live-concerts/277-the-beach-boys-50th-anniversary-concert.html ).

The major difference is that the crowd used to face the water and now the stage has been turned 45 degrees so that the water is on the left. All of the vendors are moved off the road that runs along the back of the venue, which I thought made getting in and out much smoother.

I waited for 20 minutes at the merchandise booth at the end of the show to buy a $40 Boston T-shirt (blue, and featuring the debut album artwork) and a set of Cheap Trick pins (with one shaped like Rick's 5-neck checkerboard guitar), and by the time they handed me my stuff, the entire venue was almost cleared out.

It continued to rain throughout the entire evening, but it's safe to say the crowd left "Feelin Satisfied":

I Know What I Want

I Want You to Want Me

It's Been Such a Long Time Interlude

More Than a Feeling

MMN Photos of the show:
http://www.mainemusicnews.com/boston-photos-darlings-waterfront-pavilion-bangor-maine/