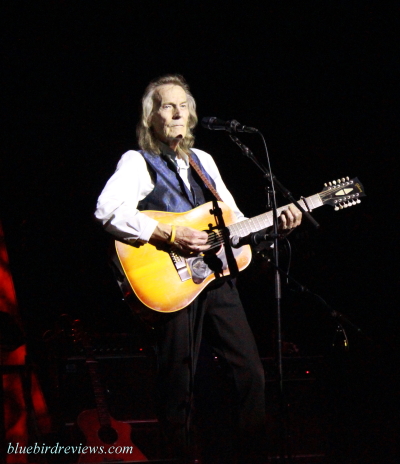 They opened the night with, "The Watchman's Gone." It was an easy ride for these men who have been playing together for years. Carter Lancaster held the guitar solos out for admiration, but was never self indulgent. He does what's best for the song. "Waiting For You" was cinematic, depicting rolling green hills and beautiful scenery of North America, with stories of relationships as they unfold. Someone in the crowd yelled out, "Love You!" and Gordon said, "Thanks" keeping on with the show. He had a bounce between songs with "A 1-2-3-4," which showed great band leader style. 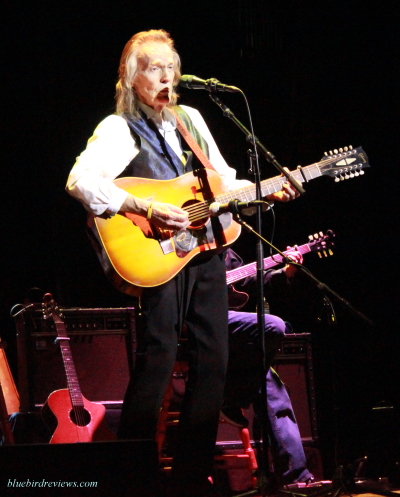 Lightfoot is a leader. His live performance was heroic and empathic. Staring down any doubts in the room, he looked into the eyes of each member of his audience. They were here for a return to quality music - and the man delivered it effortlessly. The show took everyone where we needed to be, without leaving our seats. The band made these connections too. If you had any thought in your mind, Gordon Lightfoot and his band helped you sit with it, just a little bit easier.

"I'm Gordon Lightfoot and the rumors of my death have been greatly exaggerated."

At 75 years old, Lightfoot's perspective was at the forefront of every song. The training of his rigorous vocal lessons as a young man, his jazz experience and the dedicated hours of song writing, seemed to impact every note. He stood tall and strong, with a keen focus on articulation of every sound made at the mic and on his guitar.

"Rainy Day People" brought a calm over the audience and more the Lightfoot favorites unfolded. "Let It Go" gave way to "Beautiful," and Gord announced the band. I'll say a word or two about Michael Heffernan here. If Gord and the band are swimmers, then keyboardist, Michael Heffernan is the water. His skill to carry a fluid foundation for every song with his keys was remarkable during this performance.

"Carefree Highway" is the signature message of this tour. Fans swayed and hummed along, sharing in the golden road. It was the song no one wanted to end. During "Ribbon of Darkness" Gord played around with the audience a bit. He stopped cold at the last lyric, turned, took a drink of water, then switched songs into "Sundown." Very swift with a universal swagger, Gord and his band had the audience in their zone and they knew it. "We'll be right back ..." he said, as they broke for intermission. 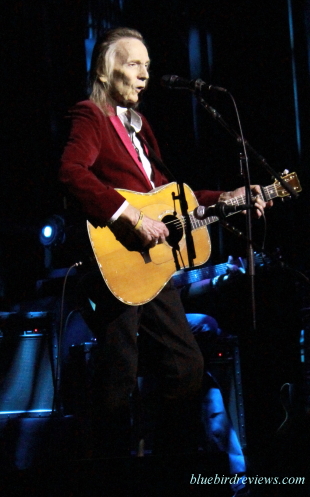 After intermission, the band came right back with the same energy as before. Gordon changed his jacket to a burgundy velvet blazer. From Endless Wire, "Sweet Guinevere" settled the crowd. Gordon discussed the history of, "The Wreck of The Edmund Fitzgerald." He told us it was, "A true story, or as close as I could get to it by putting together newspaper clippings." The Lake Superior tragedy will never be forgotten and was illustrated, in song, by this masterpiece. Barry Keane used his creative percussion work to 'build' the tension as the sadness unfolded. This was something that was not heard on the recorded track, and made seeing Lightfoot's band live a powerful experience.

"Here's one we found on the albums, it has a nice feel to it ..." "Painter Passing Through." During "Turn It Around," a contemporary jazz sound with smooth rhythms glided across the stage. Rick Haynes had to keep some great bass time on this one and he nailed it.

Gordon talked about the 'old days' in Yorkville, Toronto. He said he had an apartment after his first marriage broke up and was living like a bachelor. He told us the separation lead him to write many songs. Around the same time, he switched from United Artists' to Warner's Records. He charmed us with his stories of making cassette tapes for his album recordings, a time that most of us knew well.

When "Wild Strawberries" was played, Gordon demonstrated  his wide range of vocals. We sang along with silly glee as Gordon, once again, revealed his hidden secret of the mythical 'polka dot underwear.' This may have been obscure to some concert goers, but it is a shared anthem in our house.

Percussion, cymbals, triangles, and chains, combined to make a run-on sound with "Let It Ride." "If You Could Read My Mind" floated over the audience like a dream, while the song about geese, "Restless" illuminated the room. I love Lightfoot's use of alliteration in his songs. He has a command of not only words and images, but the letters themselves. If you closed your eyes and just focused on his guitar picking, you're reminded of his mastery of folk forms as well. 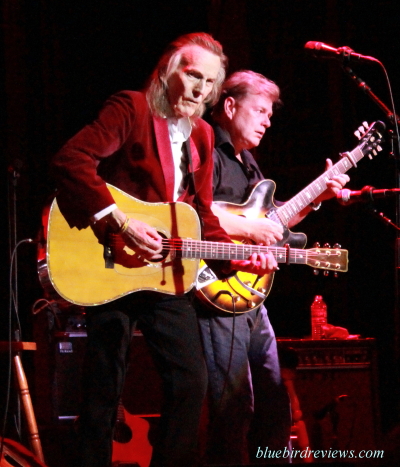 Duo guitars with Carter Lancaster brought that signature harmony sound which is classic Lightfoot. Mr. Lancaster can't be honored enough in his presentation as the guitar mastermind alongside Gordon. It was a joy to watch these men inspire each other throughout the night. Lightfoot would often step back and let Carter take the lead, which we all enjoyed very much.

Knowing the majesty of Lightfoot's music today, who would let an opportunity to meet this man slip by? Elvis Presley did. Gordon told us this story: Despite The King's great respect to cover Gordon's songs, when Elvis' press agents set up a meet and greet with Gordon, an event Gord was greatly looking forward to, the rush of the pop crowd made him impossible to reach after the show. By the time Gord got backstage, the announcement of, "Elvis has left the building" was heard. Gordon said, "I was a guy going against the tide ..." With this bitter-sweet memory, he noted the tribute Elvis gave him in covering the song, "Early Morning Rain" on the Aloha Hawaii recordings (Also on Elvis Now and Elvis In Concert). Bob Dylan, Peter, Paul and Mary and many others, have been smitten by this brilliantly paced and elegant recording. One thing I love about the song, is how Gordon's voice and the bassline tempo seem to speed up when he sings about the flight of the plane. And also the speed of the words increases too, as there is more alliteration in the lyrics about the plane, as compared with the lines of him being on the ground. "Early Morning Rain" was the moment many were waiting for tonight. It was stunning. "Gordon has owned the building ..."

This mid-summer night brought the bliss of Lightfoot's whims to comment on the fun of seasonal incongruency. "I love the work" he said, as he recalled the boyscout motto, "Be Prepared." I knew the song would be "A Song For A Winter's Night." This is an amazing mood setter for lighting my wood stove and seems to make any trouble in the world melt away. To hear Gordon Lightfoot play it live in July was perfect, because it allowed me to go back to the winter memories and take the band right along with me. The percussions were complete with sleigh bells! The song has a bass rhythm that makes the whole band rise and fall along with the set.

The quick encore brought the line-up out for "Cold On The Shoulder" which gave Gord and the band a sense of casualness with the crowd as we wound down the night. They bowed and Gordon seemed genuinely honored and proud to be in our town tonight. A standing ovation wasn't enough for this masterful troubadour. -And 50 years on the Carefree Highway is not nearly enough time to take in all of Gordon Lightfoot's music. None of us in the theatre were ready for the journey to slip away just yet. Writing this review, I've got "the morning after blues," I'd rather be back in the theatre watching it all over again. 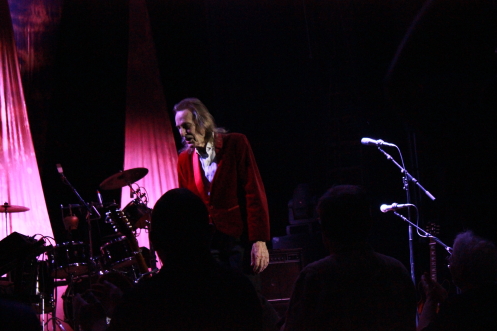 Gordon Lightfoot leaves the Calvin Theatre. All photos by Bluebirdreviews.

What is most impressive about Mr. Lightfoot, or better known by his beloved fans as "Gord," is the impact that this one man has had on music today, and will continue to have, on generations of songwriting to come. Born in 1938, he was of age when many seminal musicians were just getting started. The list of world famous artists who have proudly covered his songs is stunning: Elvis Presley, Johnny Cash, Hank Williams Jr., The Kingston Trio, Marty Robbins, George Hamilton IV, Jerry Lee Lewis, Neil Young, Bob Dylan, Judy Collins, Barbra Streisand, Johnny Mathis, Viola Wills, Richie Havens, The Replacements, Harry Belafonte, Tony Rice, Sandy Denny (with Fotheringay), The Clancy Brothers and Tommy Makem, Scott Walker, Sarah McLachlan, John Mellencamp, Toby Keith, Peter, Paul and Mary, Glen Campbell, Anne Murray, Waylon Jennings, The Irish Rovers, Nico and Olivia Newton-John.

SET LIST for Gordon Lightfoot at the Calvin Theatre, July 13, 2014. 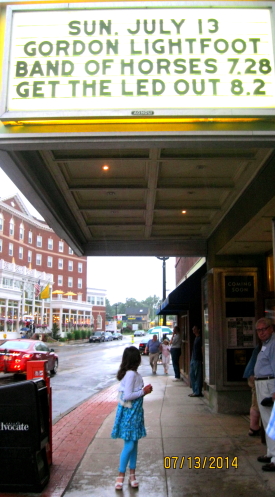 All The Lovely Ladies

The Wherefore and The Why

Once Upon A Time

Much To My Surprise

Wreck of the Edmund Fitzgerald

Make Way For The Lady

If You Could Read My Mind

Song For A Winter's Night

Cold On The Shoulder