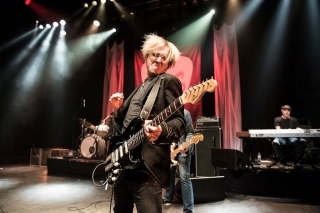 There must be no better place in the world to celebrate 20 years of glorious carrier on the road for a "Shepherd" then the Shepherds Bush Empire in London, UK. The Kenny Wayne Shepherd Band is on the last date of their UK Tour of 2015 and London is paying a massive tribute to this phenomenal artist and his boys with another sold out night.

The night starts very well, with an intense blues mini-set performed by one of the most promising talents coming from England, named Ben Poole. Ben has been building himself a solid reputation in the genre in the last few years and this evening is no exception at all. Just about time to re-arrange the stage and at 20.45, a Blues Explosion detonates for the next two hours. Kenny and the band don't hold back from the minute they set foot on stage; Never Lookin' Back, Everything Is Broken and The House Is Rockin' set fire to the evening in style and Kenny and his band seem certainly to the top of their forms. 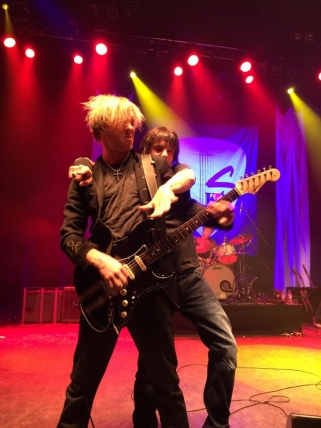 Kenny rides through the night teasing the crowd between heavy rock riffs (Search And Destroy), tender ballads (Heat Of The Sun) and bringing on stage the feeling of a true Juke Joint, by playing a B.B. King Medley halfway in the show. His band is a very well oiled machine. Although is always tremendously difficult to highlight one's performance, Noah Hunt and his powerful voice and Chris Layton on drums were, in my opinion, the brightest lights of the night, KWS aside.

There is so much intensity in the whole performance that the time just flies away and when it comes the time to play Shotgun, the whole venue get hypnotized by the majesty of Kenny's performance, offering the blues-rock Maestro a well-deserved Standing Ovation. The crowd just doesn't want the evening to finish. When Shepherd and The Band return on stage for their Encore, more fireworks bring more lights to this fabulous evening of music. Blue On Black, King Bee and a colossal cover of Hendrix' Voodoo Child are the pyrotechnic finale of a majestic performance of one of the most talented, honest and best Blues/Rock performers out there. Thank you, Kenny Wayne Shepherd Band, no doubts one day we will meet again.

Goin' Home is out now and available at the following links:

About Our Author: Giovanni "Gio" Pilato is an Italian music writer, who has been living in UK since 2002. With an enormous passion for music, and life in general, his interest in the communications began at 11 years old. He worked briefly for local radios in his youth and did a one-off radio show on 2007 on the glorious BBC 6Music Radio station in England. Gio started his freelance journalist career in 2012, with Italian artists, and is now mainly focusing on Worldwide Blues Artists. To follow Gio Pilato and his all cool radio show, Visit: (RTL 102.5 Cool (Webradio)):  http://www.rtl.it/Cool