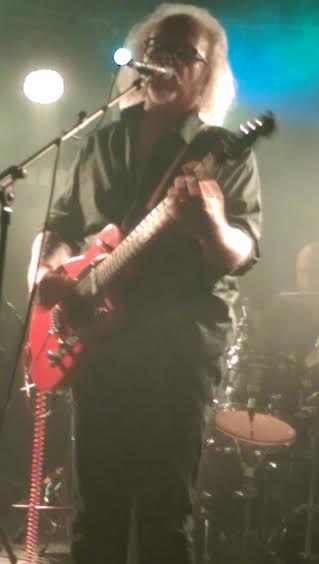 The power of music is also to make a relatively small club, like The Boileroom of Guildford in the UK, to become a little rock arena, just for one hour. This can become possible just through great artists, those with the capital "A".

Reeves Gabrels is more than a pioneer of music and guitar sound. He was the driving force that helped David Bowie's music throughout the 90's to achieve an exploding combustion of a futuristic and dazzling beauty of sound, allowing Bowie's music to get a new lease of life, through Gabrels' leadership.

As a soloist, Gabrels has published not a lot of albums but whenever it did, the results have always been of great depth and artistic stature. Gabrels is currently promoting his latest album, Reeves Gabrels & His Imaginary Friends around the UK and the show tonight is a little, great gift for this historic club in the south of England.

Opening the show as support artist, in this installment of his European Tour, Gabrels has brought the young and talented Lisa Ronson, daughter of the late great Mick Ronson, another of David Bowie's longtime collaborators. During her set, the young artist offers to the audience an interesting pastiche of sound, suspended half a way between theatricality and synth-pop, the whole accompanied by solid guitar riffs that echo the period of the 90s grunge rock era.

When Gabrels takes centre stage at 9.30pm, with his band, the whole club is transformed into a timeless place of rock worship. For the entire duration of the concert, the American guitarist and composer opens the wings of his immense talent to an audience visibly delighted by the inspiration and genius of this guitar master.

Gabrels, as expected, is performing tonight many of the songs from his latest album. Drown You Out and Zero Effect offer sharp rhymes, at the same time accompanied by powerful guitar arpeggios and very catchy choruses. The bass work of Kevin Hornback cements admirably the Wall Of Sound of a very inspired Gabrels, tonight, in this warm English evening. Wish You Were Her has got a romantic and melancholic tone, supported by a sinuous movement of the always dreamy and always unpredictable Gabrels' guitar sound.

The House Of Usher and Try, the new single just released by the talented New York artist, are executed with the technical and proverbial musical perfection that has become, through the years, the trademark of Gabrels' distinctive alchemy of sound.

Bright Lights, Big City is one of the most intense moments of the show. On this song, Gabrels gifts the audience with an impeccable blues-rock guitar solo, which even champions of the genre, such as Jimi Hendrix and Stevie Ray Vaughan, would have loudly approved.

Yesterday's Gone is the natural conclusion of a wonderful show. Often been considered one of Gabrels' highest peaks of his career, the song gives that perfect musical texture to close a rock concert of great quality. A concert that his fans and whoever loves quality music will hardly forget.